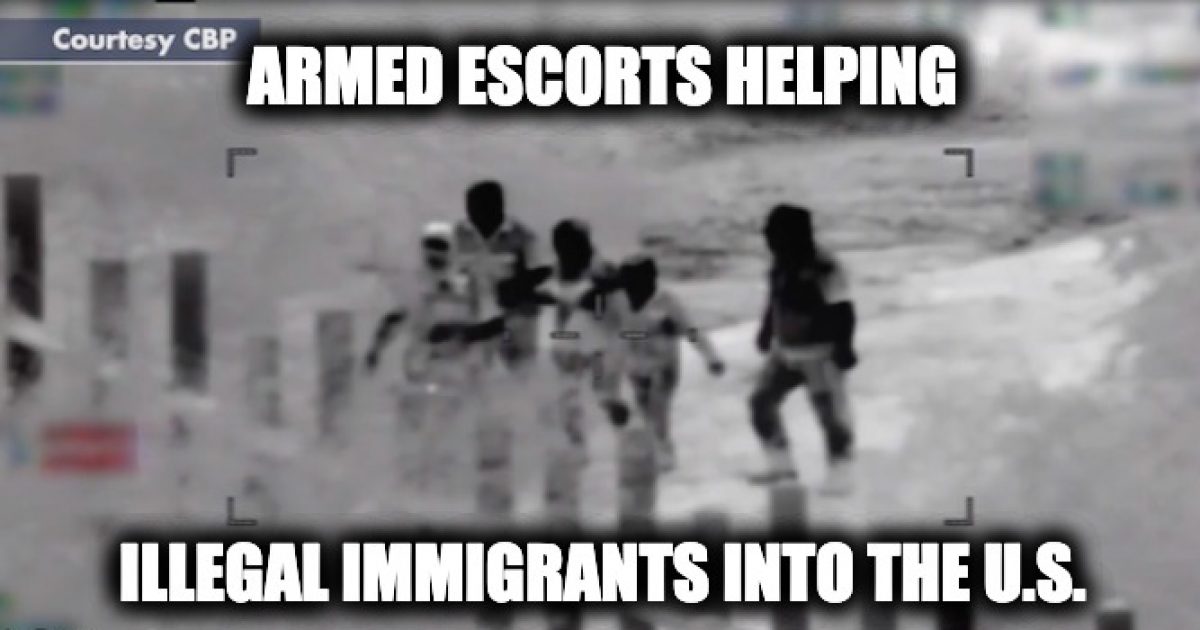 CPB border patrol has taken surveillance video showing heavily armed bands of Mexicans escorting groups of illegal aliens across the border and into the U.S., the second incident with armed Mexicans at the southern border this month.

The video shows four to five men in full tactical gear and masks — carrying long guns and AK-47 assault rifles – escort a Guatemalan woman and her 8-year-old child under a vehicle barrier. The armed escorts turned back across the border. The woman and child turned themselves into border agents, who responded to the incursion.

The area is almost identical to where last week agents apprehended 399 Guatemalan immigrants who arrived in several buses just 100 yards from the border. The area contains no pedestrian fence and is adjacent to the busy Highway 2 in Sonora, Mexico.

How long will it be until these criminals erupt in firefights with our border patrol agents whose job it is to protect our border and keep illegals at bay?

“This is highly unusual and highly concerning to the agency,” a border official told Fox News. “These armed individuals along the border represent an escalation of tactics. This is not mom and dad and kids deciding to head to the border. This is a no kidding, orchestrated effort to bring individuals to the US. It is not just the numbers. It’s who is running this enterprise.”

This is frightening and speaks to the possibility of a shooting incident along the border especially when one considers that story with an incident earlier this month where a U.S. soldier was forced to surrender his firearm to a Mexican soldier while on U.S. soil!

A senior defense official says the Pentagon is reviewing how U.S. soldiers responded during an incident this month in which Mexican troops detained and disarmed Americans on Texas soil.

The standoff between two U.S. soldiers and as many as six Mexican military officials on April 13 is believed to be the first of its kind, according to the senior defense official from Northern Command, or NORTHCOM. “This is the first incident that we’re aware of that the two militaries came together,” the official told the Washington Examiner.

Two Army soldiers from Washington state were sitting in an unmarked Customs and Border Protection vehicle south of the U.S. barrier but north of the international boundary near Clint, Texas, when Mexican troops moved in on them.

The Mexican soldiers, each carrying FX-05 Xiuhcoatl rifles, detained, disarmed, and questioned the U.S. troops. One soldier’s Beretta M9 service pistol was taken from him and temporarily confiscated.

Obviously, President Trump was not pleased:

Mexico’s Soldiers recently pulled guns on our National Guard Soldiers, probably as a diversionary tactic for drug smugglers on the Border. Better not happen again! We are now sending ARMED SOLDIERS to the Border. Mexico is not doing nearly enough in apprehending & returning!

This is intolerable! Incredibly the President’s call for a wall along our southern border received an endorsement from an unlikely source,  NY Times’ Tom Friedman.  The very liberal Friedman spent a day at the border and wrote a column that said in part,

“The whole day left me more certain than ever that we have a real immigration crisis and that the solution is a high wall with a big gate — but a smart gate.”

After a comment like that, it’s surprising that the Democrats don’t take away his secret decoder ring and change their secret password.  But if Friedman’s column and the two incidents above speaks to anything they speak to growing tensions on the border that Democrats are allowing to fester and grow.