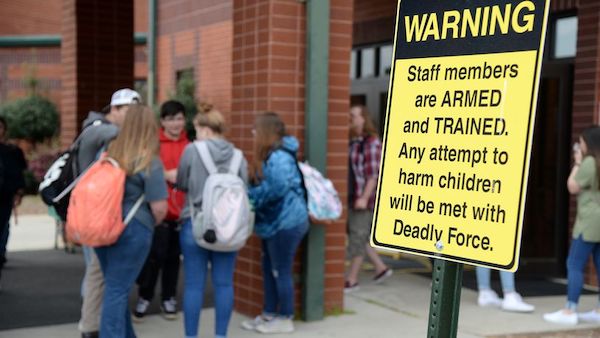 Every school shooting scenario follows the same trajectory. Some malcontent enters a target-rich area with little resistance and picks off victims until lethal force arrives to take him down.

The nightmare scenario for those in harm’s way has always been when help is ‘out there’ while the threat they face is ‘in here.’

Killers exploit that delay with impunity, knowing that, until police arrive, they are effectively an apex predator surrounded by prey.

It would be unsurprising if that feeling of uncontested power over the lives of younger victims was part of the math in these dirtbags choosing the venues they do. It’s not as though they are pushing their luck at a gun show, a police station, or any other place where people are likely to shoot back.

These cowards might be psychos, but they make calculated decisions and deliberate choices. They seek out soft targets.

One Georgia school system is done waiting for someone else to solve the problem. They are ensuring help is on the right side of the door — whether the police show up or not.

Better still, they are publicly announcing that they are not the soft target some other schools have been. If one of these scumbags shows up with evil intent, school staffers are ready and willing to punch his ticket to Hell.

The Laurens County school board agreed to a program that would arm some civilian employees in schools, in response to mass shootings in schools and elsewhere nationwide.

“What I can disclose is not every employee in the school system or in a school will be authorized to carry,” said Dr. Daniel Brigman, superintendent of the Laurens Co. school system. He remained mum on many of the other details, saying they would breach security protocols.

Brigman says the gun program is a work in progress, in conjunction with the county sheriff. He says school personnel who volunteer to have an accessible firearm will be given a “mental wellness assessment,” as well as a criminal background check and safety training before having a gun in a school.

“What I can assure all our parents is this is not a careless process,” Brigman said. “We’re talking about the preservation of life and student safety.” —11Alive

If these clods know they will be taken down like the rabid dog they are, if they know, they will be denied any chance at fame or infamy, and they never get the power trip of prowling like an apex predator… chances are, they will think twice about darkening the door of a school at all.

And isn’t that the entire point of 2A protections in the first place?