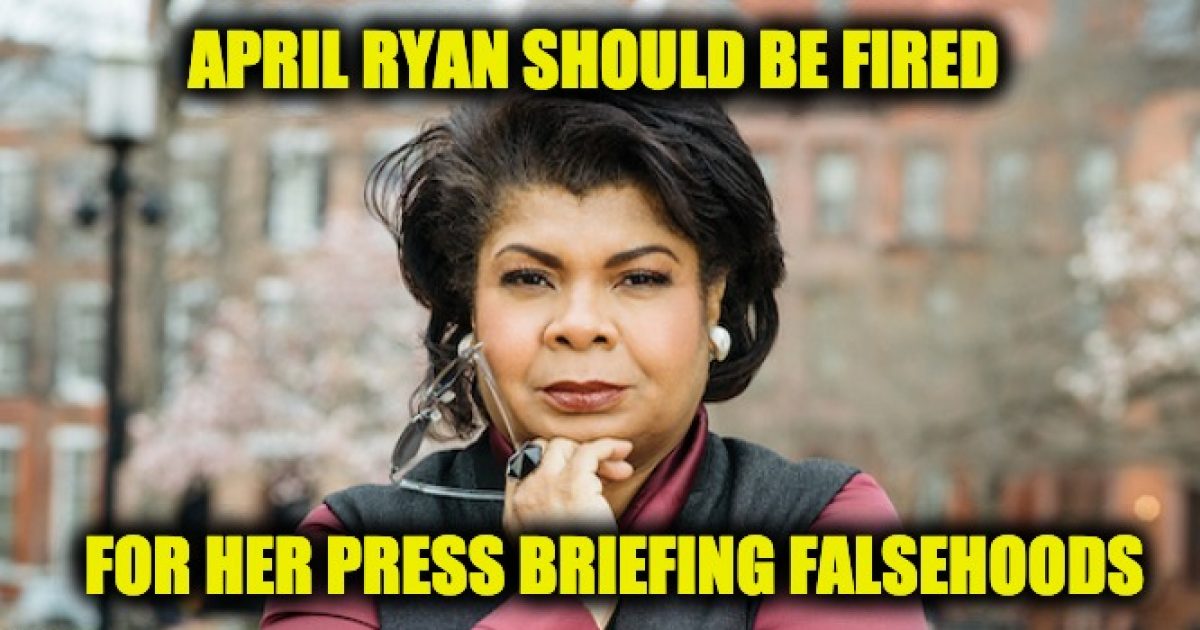 White House correspondent, and Washington, D.C., bureau chief for American Urban Radio Networks as well a political analyst for CNN, April Ryan called for the firing of White House Press Secretary Sarah Sanders for a “slip of the tongue” that Ryan called a lie. But Ryan has made deliberate lies about story facts when asking Sanders questions.

In May 2017, following the turbulent firing of FBI Director James Comey, Sanders told reporters that “countless” FBI agents had lost confidence in Comey despite one reporter’s assertion that the “vast majority” of them supported his leadership. According to Special Counsel Robert Mueller’s office, Sanders told investigators her claim was a “slip of the tongue” and was “in the heat of the moment,” admitting that it was not founded on anything.

In other words in the heat of the moment, Sanders screwed up, and when she testified to Mueller’s office, she admitted it.  But  April Ryan flipped out:

“Not only does she not have any credibility left, she lied,” Ryan told CNN anchor Erin Burnett. “She outright lied and the people, the American people can’t trust her. They can’t trust what’s said from the president’s mouthpiece, spokesperson, from the people’s house. Therefore, she should be let go. She should be fired. End of story. When there is a lack of credibility there, you have to start and start lopping the heads off. It’s ‘Fire Me Thursday’ or ‘Fire Me Good Friday,’ she needs to go.”

Boy oh boy, April Ryan sounds as if she believes it’s a lie worse than, “if you like your plan you can keep it” and if Sarah Sanders isn’t fired immediately there will be a disaster of biblical proportions. Real wrath-of-God type stuff.  Fire and brimstone coming down from the skies. Rivers and seas boiling. Forty years of darkness. Earthquakes, volcanoes. The dead rising from the grave. Human sacrifice, dogs, and cats living together – mass hysteria.

April Ryan, however, has made deliberate lies during White House briefings, not “slips of the tongue” but false facts.

For example, this past June, NBC’s Peter Alexander asked Sarah Sanders why, if President Trump supports free speech in the case of the bakeshop that came out ahead in the June 4th Supreme Court ruling allowing the owner to follow his faith by not participating in same-sex weddings, why doesn’t he support free speech in the case of NFL player protests. Ms. Sanders answered that it wasn’t about free speech, it was about respecting the flag, which by the way, agrees with what Colin Kaepernick said at first.

Then the White House spox tried to call on CBS News Radio’s Steven Portnoy, but the always unprofessional Ryan kept screaming out her question, “Is the president aware that this is about police-involved shootings and not about the American Flag?”

But that’s not what Colin Kaepernick said.

Colin Kaepernick is the person who started the kneeling during the national anthem trend,  According to his words, the protest was all about disrespecting the flag of the evil racist nation that he believes we are.

Sorry, April Ryan but your question about a mediocre NFL QB was much worse than Sarah Sanders slip of the tongue. You shouted out a question that based on a falsehood created to the country and put down the police who spend their days protecting us all.  Your lie was intended to spread that divisive falsehood and garner more publicity for yourself.