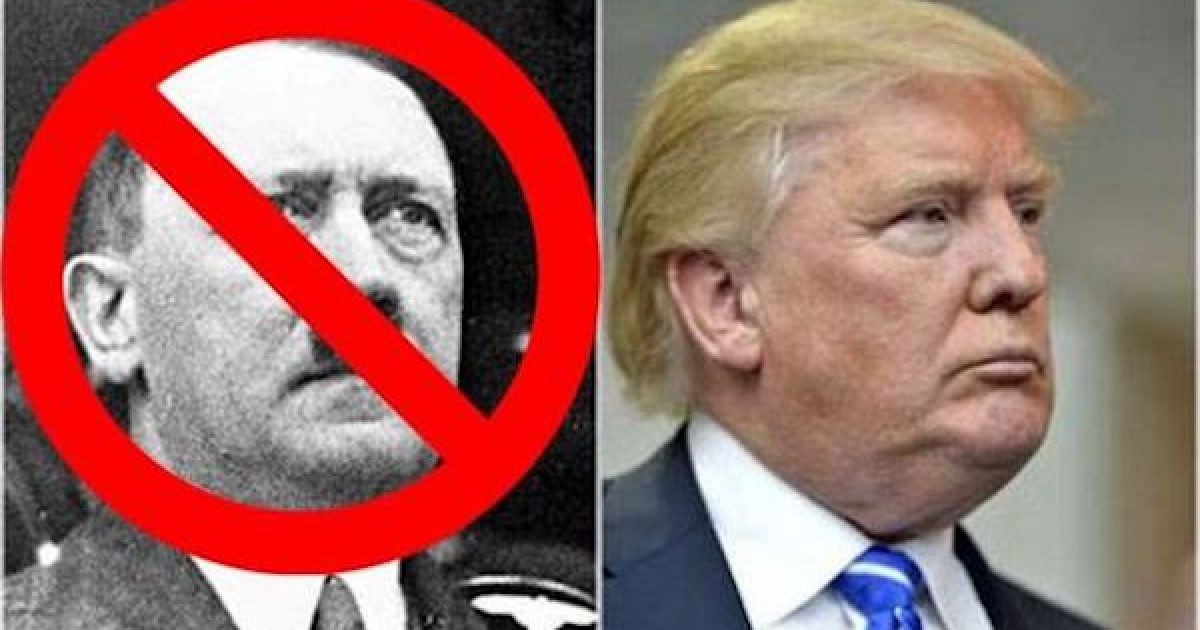 Holocaust references used to be a red line not to be crossed but since Donald Trump came down the escalator to announce his candidacy for the office President too many times we hear and see people trot out the word “Nazi” to describe someone or something associated with Trump. At least when those someones or somethings do not align with liberal political beliefs even by people in the MSM who should know better.

These Nazi or Hitler references are inappropriate because their hyperbolic nature cheapens the memory of the actual horrors that millions of people including six million Jews (1.5 million of them were children). From a journalistic point of view, the exaggeration is a sign of disrespect for their audience. Perhaps they feel their readers or viewers are not intelligent enough to understand their prose unless their narratives are blown way out of proportion, or maybe they just lack the semantic agility to craft the appropriate prose to interest and inform their audience.

Even before he was elected the MSM was comparing Trump to Hitler and/or Nazis, some examples include:

Hitler was seen as the avenger of the humiliation of the Versailles Treaty and the economic destitution afflicting much of Germany. He vowed to make Germany great again (sound familiar?). That the particulars were an incoherent jumble didn’t matter either

First, you don’t have to go back to history’s most famous example, Adolf Hitler, to understand that authoritarian rulers can achieve power through the ballot box.

Though hardly anyone talks about it today, we really should. It is still real. It exists. It is distinct. It is not going away. Trump has tapped into it, absorbing unto his own political ambitions every conceivable resentment (race, class, sex, religion, economic) and promising a new order of things under his mighty hand.

You would have to be hopelessly ignorant of modern history not to see the outlines and where they end up. I want to laugh about what he said, like reading a comic-book version of Franco, Mussolini or Hitler

…each made the ignorant comparison

September 2016 was Trump is Hitler month at the Washington Post as two of their columnists Richard Cohen, and Shalom Auslander made the ignorant comparison.  Actually, Auslander refused to say Trump was like Hitler because “It belittles Hitler.”

The references continued after the election.

In December 2016, The New York Times Book Review featured a piece by Michiko Kakutani from his book “How Propaganda Works” where he compared Trump’s speeches to Hitler’s Mein Kampf.

Perhaps the worst of the many examples occurred in December 2017 when Barack Obama, the most anti-Semitic president in my lifetime, compared Trump’s battle against fake news to Hitler, That’s what happened in Germany in the 1930s, which despite the democracy of the Weimar Republic and centuries of high-level cultural and scientific achievements, Adolph Hitler rose to dominate, Obama noted. “Sixty million people died.

During the past few weeks, the Hitler references began to build again. These were based on the child separation crisis at the Southern border, even though President Trump was doing the same thing as his predecessor (but under Obama, there was nary a peep about child separation).  This round of Nazi hysteria may have more to do with the fact that the president is Donald Trump than his enforcement of the law is causing family separation at the border.

Whether one agrees with Trump or not understand that the “new” Trump administration policy is not to separate children from their parents, that started during the Obama Administration and neither president wanted it to happen. Trump’s new policy of “Zero Tolerance” refers to total enforcement immigration law.

In fact, many of the pictures of children in cages circulating the internet were taken in 2014 when the Obama administration was forced to separate children from their parents and put them in the same detentions centers as the Trump Administration does now.

What caused this separation was a 2014 Ninth Circuit Court decision which expanded a 1997 ruling in the case of Flores v Reno from covering only unaccompanied alien children to “accompanied” ones as well. This set a general standard for accompanied children that the government couldn’t hold them in custody with their parents for more than 20 days. It’s also why the president’s recent executive order directs the Attorney General to “Go to court and try to get them to change the Flores decision.” If the court doesn’t amend its decision, the courts will reject the executive order.

Despite the truth behind the child separation resulting from enforcing immigration law, liberals have been spewing inappropriate, incorrect descriptions of what was happening and inappropriate Holocaust references.

It may have begun with Joe Scarborough of MSNBC who has been feuding with the president ever since Trump was nasty to his co-host/lover Mika Brzezinski. On June 15 Joe compared the ice agents to the Nazis telling children they were going “to the showers” and “never coming back” during the Holocaust.

That must have been the MSNBC theme of the day because it came up again on the on the program following Morning Joe, Live with Stephanie Ruhle. One of Rule’s guests former Obama campaign staffer Stephanie Cutter asked “We can’t find a solution to this problem without harming children? Without putting them in concentration camps?” Former RNC Chair Michael Steele (who has been bitter since he lost his bid for a second term) agreed with Cutter.

When the illegal immigrant children in these detention centers, they get three square meals, toys to play with, TV to watch, outdoor playtime, and even school. That doesn’t sound like the treatment of young Holocaust victims in concentration camps.

The next day former CIA director Michael Hayden tweeted a picture of the Birkenau concentration camp:

Other governments have separated mothers and children pic.twitter.com/tvlBkGjT0h

On a more serious note, good reasons to compare the Trump administration to the Nazis include:

1. Being able to discuss out loud the chance that Trump might someday do Hitler-esque things

2. Decrying the ways Trump has already gone more in a Nazi-like direction than we’d like

This Sunday, Film-maker, and meathead Rob Reiner and his wife appeared on MSNBC’s Morning Joy.  Michele Reiner who is the daughter of a survivor babbled:

“And I have to tell you, my mother was in Auschwitz. She got separated from her entire family — lost her entire family. I never thought I would live to see something like that, particularly in this country, ever again in my lifetime.”

When my daughter was young, we were visiting the home of my wife’s aunt who is also an Auschwitz survivor.  I remember my daughter staring at the numbers tattooed her aunt’s arm until she finally asked why she wrote on her arm.

Hitler chose that method of identifying the Jews because tattooing is prohibited in the Jewish faith (he didn’t realize that people couldn’t be punished for forced tattooing). Either way, if Trump doesn’t force those separated children to tattoo numbers on their arms, then he probably isn’t Hitler.

In fact, Donald Trump never wrote a book about a future genocide like Mein Kampf, never forced people to put tattoos on their arms, or crowd them into death camps where they would suffer torture till they were gassed, shot, thrown in ice water, or died some other horrible death. Nor do those centers housing illegal immigrant children run brutal “experiments” on twins. Trump never ordered the mutilation of corpses by taking out gold teeth, prosthetic limbs, etc., anything that could be reused. And he never had bodies thrown in mass graves or crematoria.

Since Trump never did any of that, nor are children tortured where they are housed, any comparisons to the horrors of Nazi Germany are not only absurd but also, they are an insult to those who perished or survived the Holocaust, and even to those of the “Greatest Generation” who fought to rid the world of this evil.

Sadly, it is a habit of liberals who disagree with an opinion to resort to name calling. I was once called an anti-Semite by an employee of the liberal organization Media Matters. And he did it on a Saturday when I am not online (but my Gentile friends at Breitbart.com protected me online until my post-Shabbos return).

Holocaust references used to be a red line not to be crossed. In the sporadic cases when a Republican in power or media used that label on President Obama as Rep. Randy Weber did in January 2015,  this writer ripped them a “new one.”

Those cases are no longer rare. Since Donald Trump was nominated for President too many times, we hear and see people trot out the word “Nazi” to describe someone or something associated with Trump that does not align with liberal political beliefs.

The use of Nazi references especially by media and/or political figures is an example of an ignorance of history, political lunacy, and when the analogy’s uttered by a media figure a case of laziness or an inability to come up with an appropriate analogy. It is merely another example of Trump Unacceptance and Resistance Disorder (also known as TURD).

My recommendation to those wanting to call Trump a Nazi is DON’T!  If you’re going to call Donald Trump other names, go ahead, it’s still a free country (although not as free as it was before 2008 but it’s gotten a lot closer since Trump took over). However, if you decide to call him names–leave the Holocaust out of it. An inappropriate reference to the Holocaust is a disservice to your audiences, and more importantly it is a disservice the memory of the horrors suffered by the real victims of the real Hitler.