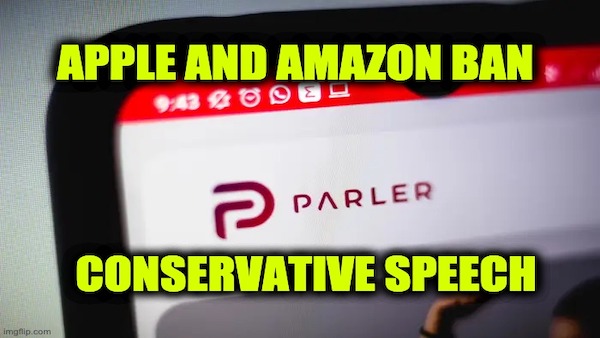 Now the liberal movement to remove conservative thought from America is going after the social media alternatives that allow free speech. Apple and Amazon are canceling Parler. If something doesn’t happen soon, it will become nearly impossible for conservatives to express their patriotic thoughts. The censorship snowball has quickly formed into an avalanche.

Liberals won’t care. Neither will the mainstream media.

This affects every American, whether they’re smart enough to understand it or not.

The tech giant said Saturday Parler failed to follow Apple’s guidelines by not removing harmful content from the platform.

“Parler has not taken adequate measures to address the proliferation of these threats to people’s safety,” the company said in a statement. “We have suspended Parler from the App Store until they resolve these issues.”

Parler is not only favored by Trump’s supporters but by conservatives who have been censored by the social media giant.

DEATH BLOW? Amazon has informed @parler_app that they are kicking them off their web hosting service. See attached statement from Parler pic.twitter.com/VDFhR1GEQv

If you are alarmed, you should be. Especially because the overwhelming majority of conservatives have never engaged in political violence once in their entire lives. Liberals who have incited violence get a blue check and pass from social and mainstream media.

I cannot guarantee how much longer you will see our content posted on major social media platforms.

This is a mortal threat to our republic and our two-party system. The political opposition who would speak out against the Joe Biden administration are being censored by the largest companies in the world. Now they are even trying to cut-off the opportunities to speak out in opposition.

The danger is that this purge will drive more and more people to darker and darker corners of the web. It will become itself a radicalizing element. They are driving millions of Americans into a desperate situation by taking an already frustrated segment of America, conservatives, and raising that frustration to Defcon One by preventing them from speaking out at all.

We must peacefully respond to this latest affront to free speech. If you wish to call Apple support and express your opinion regarding silencing Parler,  their number is 800–692–7753. To complain to Amazon, call 888-280-4331. Tell them what you think, but remember the people who answer the phone are not the ones who made the anti-American decision, so don’t cuss or yell.