AOCs Latest Stupid Demand: Dissolve SCOTUS ‘For The Sake Of The Planet’ 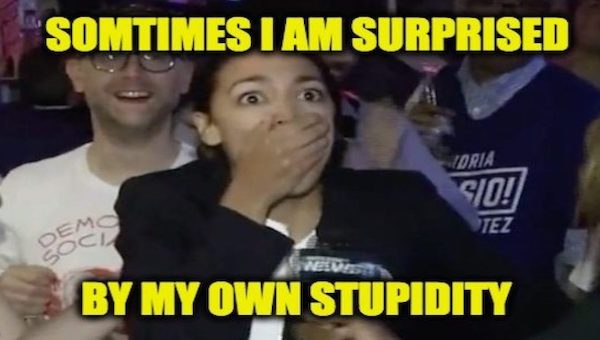 On Thursday, the “pompous little twit” known as AOC demanded the Supreme Court be dissolved “for the sake of the planet” after the Court reigned in the EPA’s power to regulate greenhouse gases.

“Catastrophic. A filibuster carveout is not enough. We need to reform or do away with the whole thing, for the sake of the plane,” the twit said on Twitter.

Catastrophic. A filibuster carveout is not enough. We need to reform or do away with the whole thing, for the sake of the planet. https://t.co/if8PIbfs42

Robert Romano, Vice President of Public Policy at Americans for Limited Government Foundation, explained what was at stake:

It also stands to potentially overturn the Court’s 2007 decision, Massachusetts v. EPA, a narrow 5-4 ruling by then-Justice Anthony Kennedy that had opened the door for federal regulation in this area in the first place by stating carbon dioxide could be regulated under the terms of the Clean Air Act even though the law never contemplated doing so.

This is what enabled the 2009 carbon endangerment finding by the Environmental Protection Agency (EPA) during the Obama administration, and the EPA rules on new and existing power plants, defining carbon dioxide as a harmful pollutant under the terms of the Clean Air Act, and setting forth a framework to incentivize coal plants to either be retrofitted to be natural gas plants or else be shut down.

As a result, the Consumer Price Index for electricity has increased by 29 percent since 2007, according to data compiled by the Bureau of Labor Statistics.

In other words, the Court fixed a problem that it helped create.

Democrats complain that this Court is filled with conservatives. That shows how little they understand about the Supreme Court. Donald Trump did not appoint any conservatives to the Court. He appointed originalists. They believe that all statements in the Constitution must be interpreted based on the original understanding “at the time it was adopted.”

The EPA decision was based on the constitutional separation of powers. The EPA went beyond the powers given to them by congress. Congress could give them the power, but the EPA couldn’t just take power.

Twitter responded to the Democratic Party twit from NY:

Um, there’s this thingy called the constitution, Article III, Section I that states that “The judicial Power of the United States, shall be vested in one supreme Court…”.

You can’t desolve the SC, but Congress can change how it’s organized.

Maybe you should read up on it.

To be a sitting member of Congress, I’m quite fascinated with the lack of decorum you possess in speaking such senseless rhetoric.

You don’t seem to get what the job is SCOTUS is. It’s to LIMIT governmental agencies over reach. The EPA has consistently over reached.

But overreach and dictatorial control are EXACTLY what AOC wants.

Reading the Constitution would be a good start. If only she could read.