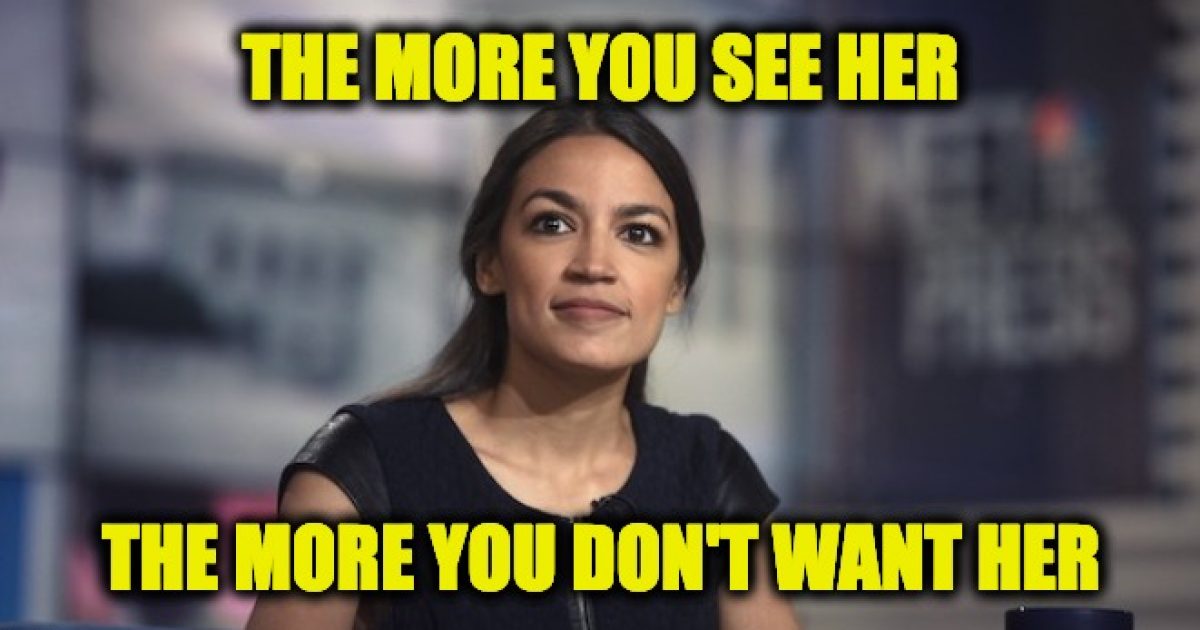 (With apologies to the Nat King Cole classic song) When it comes to freshman Democrat Rep. Alexandria Ocasio-Cortez, the more you see her, the more you don’t want her.  According to Gallup, Ocasio-Cortez’s  “never heard of her” numbers have plummeted -21 percentage points and her unfavorable’ rating has skyrocketed+15 points.

Keep Alexandria talking and cover it often. Because people need to see her to know her and the more people know her…

The New York #Democrat shot to #fame amid the party’s lurch to the left and embracement of socialist policies such as the Green New Deal, yet the more people learned about the 29-year-old freshman congresswoman, the more they were turned off by her.https://t.co/LDZRBgX3kX

U.S. Rep. Alexandria Ocasio-Cortez’s unfavorable rating has spiked after just months in Congress, with most of the public viewing her negatively rather than favorably, a new poll shows.

The New York Democrat shot to fame amid the party’s lurch to the left and embracement of socialist policies such as the Green New Deal, yet the more people learned about the 29-year-old freshman congresswoman, the more they were turned off by her.

A Gallup poll released Friday shows that Ocasio-Cortez’s unfavorable rating has risen by 15 points since last September, when she had yet to win the general election, increasing from 26 percent to 41 percent of the American adults polled.

She has also managed to increase her favorability rating, but only by 7 points. About 31 percent of surveyed people view her favorably, compared to 24 percent in September.

Gallup surveyed 1,932 adults in all 50 states and the District of Columbia from Feb. 12-28. The poll has a margin of error of plus or minus 3 percentage points.

She’s already cost her state 25,000 jobs and about $27 billion in tax revenue that goes with those aforementioned jobs.

But AOC doesn’t believe the survey was fair.

If you want to know what subconscious bias looks like, it’s a headline saying “AOC is underwater with every group EXCEPT women, nonwhites, and 18-34 year olds.”

So older, conservative white men are considered “everyone” and everyone else is discounted as an exception.

Apparently, self-awareness is not a strong suit of Ocasio-Cortez.

I am old enough to know that this is her 15 minutes of fame. Soon she will be voted out and back in her playpen & forgotten.
Ocasio-Cortez's 'unfavorable' rating skyrockets, with most people viewing her negatively: poll https://t.co/oNGo6BNMyo #FoxNews

Finally the American people are realizing she is an idiot who doesn’t understand economics or what Americans truly value and she isn’t it. Ocasio ‘unfavorable’ rating skyrockets, with most people viewing her negatively: poll https://t.co/OKf7srwYTp #FoxNews

The reason people know more is bc Fox News has turned into “AOC TMZ” (no offense to TMZ), so awareness is growing w/ GOPers.@JaneMayerNYer has reported deeply on this propaganda machine + it will be aimed at any Dem they want. Nothing changes that.

We can’t be scared by that.