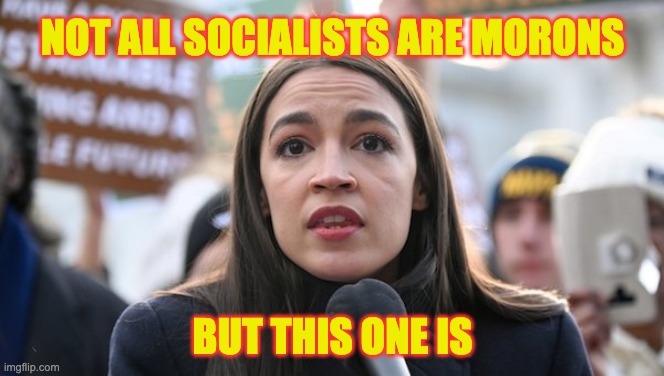 AOC said that both the Republican base and the Republican Party are embracing “white supremacist core logic.” That seems just a bit inflammatory. AOC tells Don Lemon

On Monday, Congresswoman Alexandria Ocasio-Cortez (D-NY) appeared as a guest on Don Lemon’s CNN show and shared her view of Critical Race Theory as — what they dubbed — a new front in the culture war.

It was truly a “meeting of the minds” in the worst possible sense — numbskull race-baiter Don Lemon and AOC, whose only seems to possess political smarts, decided to tackle one of the hot topics of the day and expose that neither one of them comprehends the issue. Maybe it’s because they don’t have kids.

Don Lemon began by asking AOC about the debate over Critical Race Theory (CRT), “Do you think the Republican efforts to redefine it [CRT] and use it as a scare tactic is working?”

She responded by creating a giant strawman argument and then attacking it full force.

She said, “Well, I do think it’s working because what we have seen is the Republican base, and the Republican Party has really pivoted to a strategy of using race and using just the changing demographics of this country. And as we saw on January 6th, using a white supremacist core logic to reanimate a very core fear in this country of ‘the other.’ And so, what’s really important, is that we come together and have a powerful rebuttal to that core logic, not just in fact-checking Republican claims, but actually confronting the core logic and addressing the core fears that they are trying to really tap into when they try to use terms like ‘Critical Race Theory’ as a proxy for trying to talk about race in schools in general.”

This is an absolutely disingenuous Democrat talking point. Republicans are not trying to stop the teaching of slavery, Jim Crow laws, and the Trail of Tears. They just don’t want kids taught that they are oppressors and oppressed based on their skin color, which is what this toxic CRT is push does. It’s not being used as a “proxy” for all discussion about race. It’s because after decades of Howard Zinn’s awful and overtly leftist textbook, “A People’s History,” parents understand that the goal is to indoctrinate rather than educate students. And of course, the historically inaccurate “1619 Project” is also being taught in schools.

Lemon says that he thinks the outrage over CRT is to “win back” suburban white voters, and “the best way to do that is to give them fears about their children.”  AOC agrees. (Of course, she does.) Then she adds that this focus on “race” is related to the GOP push to allegedly “disenfranchise” minority voters with election integrity laws that require things like voter ID.

She then says that CRT isn’t really being taught in schools — not even law schools where she says there should be more of a focus on it.

“We know that Republicans have started to now use these laws curtailing critical race ‘curriculum,’ that’s not even being taught in the first place, as a proxy to saying we can’t teach anything about race in our schools beyond just some of the most minimal, minimal, minimal facts,” she says.

That’s just blatantly false. But then, she was probably taught from the Howard Zinn textbook.

She says that Republicans don’t want their kids to be taught about race, are trying to censor people and “ban speech,” and “attacking the core roots of history in this country.”

Oh… so it’s the Republicans that are censorious because they don’t want every human interaction to be viewed through the lens of race? Interesting.

AOC must not have heard about the Biden Administration pressuring Facebook to censor content they don’t like or the Big Tech and Corporate Media collusion to not cover the Hunter Biden Laptop story before the election. And, related to education, who is it that is now demanding that “To Kill A Mockingbird” and “The Adventures of Huckleberry Finn” among others are not being taught in classrooms because of “racist language” instead of the overarching theme of tolerance in both? Leftists don’t like the classics much, and it’s probably because they don’t understand them.

Don Lemon then decides that he’s going to explain what parents who oppose CRT are thinking. His theory is that parents are concerned that it makes kids feel “white guilt” at “too young of an age.”

AOC responds with the study about babies noticing race and “gravitate” to communities of their own race and posits that follows into adulthood.

But weirdly, the people who are all on board with CRT and “anti-racism” in education actually advocate for segregation which will only exacerbate that particular issue — if indeed it is an issue in 2021, which is doubtful. AOC doesn’t mention that, though.

It’s just an excruciatingly stupid six and a half minutes of television-normal for the brainless pair, Don Lemon and AOC.

This is what happens when you embrace the view that people who disagree with you must only do so because they’re racist.

For the airhead Congresswoman and the dumber than a sack of hammers CNN commentator, let’s go through this…

Republicans are not “redefining” Critical Race Theory. They’re learning what it is. Largely, this is due to a year of online “Zoom” classes during the pandemic that made parents more aware of what exactly kids were “learning” in school. And educators don’t like that very much.

The largest teachers’ union in the country, the National Education Association, quickly scrubbed their commitment to overtly push CRT in classrooms from their website when it was noticed by right-wing media. You can find an archived link here.

We also know that teachers are out there saying that they are teaching Critical Race Theory and are admitting that they are activists because they just can’t shut up with the virtue signaling on social media.

Here is conservative Lauren Chen exposing this on her YouTube channel:

For all Congresswoman AOC says about Rev. Dr. Martin Luther King Jr., she doesn’t seem to grasp that this view of race and teaching it to children is precisely the antithesis of what he taught and believed. He didn’t want people judged on the color of their skin, but on the content of their character.

And frankly, with AOC’s disingenuous vilification of the entire Republican Party as rooted in “white supremacist core thinking” simply because they don’t want the constant focus on race as the be-all, end-all to human interactions, well, that shows something about her character. It’s certainly not something that anyone should be proud of.