Ocasio-Cortez Trying To Force Banks To Implement Her Socialist Agenda 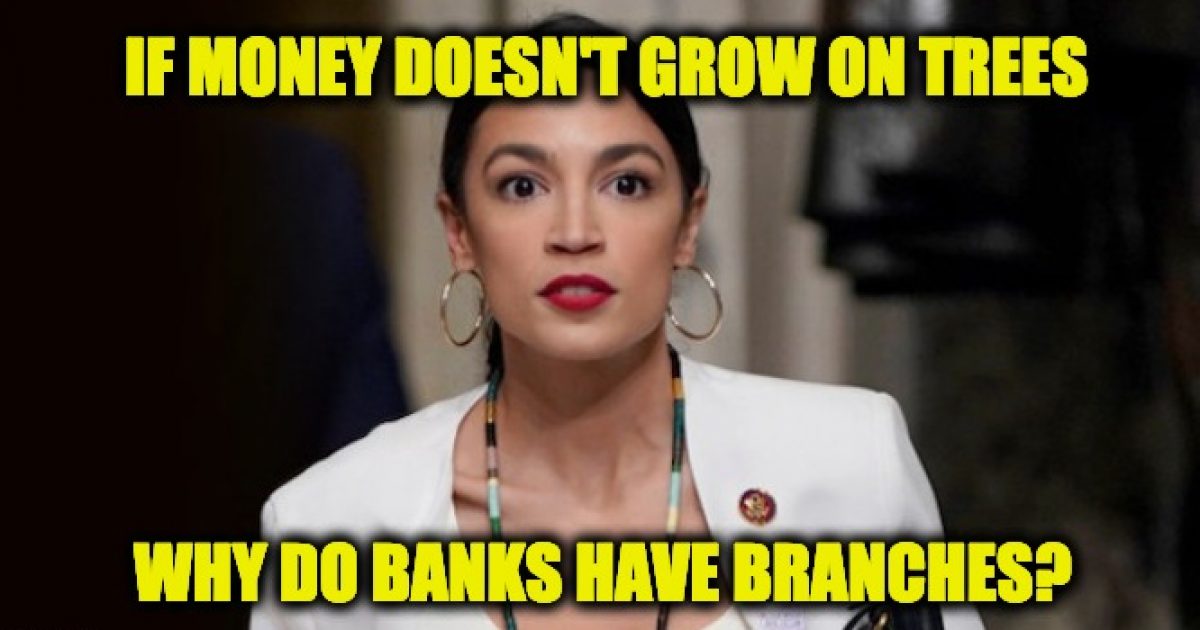 The last time liberals forced banks to implement their policy was when they forced banks into subprime lending. That directly led to the near-collapse of the banking system. Alexandria Ocasio-Cortez, the new star of the Democratic Party, is looking to make the same mistake. She is forcing banks to implement her socialist agenda

New York Democratic-Socialist Alexandria Ocasio-Cortez has revealed how she intends to eliminate our borders, take away our guns, punish “the rich,” and implement her destructive global warming “Green New Deal” policies, all without passing a single law through Congress. Along with fellow radical leftists, AOC is trying to shame the lenders into pushing their socialist policies for some of the country’s most divisive issues: climate change, gun violence, and immigration.

Progressives have been waging an increasingly virulent culture war against conservatives ideas and legal products in the U.S. by putting pressure on the private sector, and sometimes they’re winning:

The reason the left has resorted to this public shaming campaign is that, at long last, they’ve realized they will not get Congress to implement socialism, and they have to find a different way.

That’s why the extreme leftists are doing an end-around Congress and instead, begun to attack banks for providing loans to businesses that disagree with their socialist goals.

AOC, the future of the Democratic Party, along with her leftist buddies in the House are beginning to systematically embarrass banks to stop funding industries that go against her socialist goals. Oh, she isn’t going to do with the laws, mind you. She is going to do it by forcing the banks to bend to “public opinion” (i.e., her pro-socialism campaigns) to summarily cut off all conservatives who dare try to make a living and ultimately create another banking crisis.

According to Politico, Ocasio-Cortez is launching a program to “shame” America’s massive financial institutions “into taking a stand on some of the country’s most divisive issues: climate change, gun violence, and immigration.”

The lawmakers are leveraging seats on the powerful House Financial Services Committee and a huge following on social media to confront finance industry executives and discourage them from funding oil pipelines, firearms makers and private prison companies that operate immigration detention centers. Like-minded activist groups are helping amplify the message.

The radical, anti-American New Yorker even noted that she plans to go around the legal process.

“There’s more than one way to skin a cat, and not everything has to be done through legislation explicitly,” AOC said. “We can also use the tools that we have here to pressure change in other ways as well.”

She recently announced one measure of the success of her extra-legal campaign.

Huge update: JP Morgan & Wells Fargo have announced that they will no longer fund private prisons.

How did this happen? Through organizing people & public pressure!

The full plan is to force banks to close the accounts and ban all Americans who don’t agree with AOC’s Socialism.  AOC and the extremists who want to change what America stands for,  want to make belief in her socialist plans a prerequisite for being “allowed” to participate in the economy or to hold a job.

Thankfully in the Senate,  some conservatives are fighting back:

Sens. Kevin Cramer (R-N.D.) and John Kennedy (R-La.) have introduced legislation designed to penalize big banks if they cut ties with the firearms industry. Kennedy for several months has bashed Citigroup and Bank of America for distancing themselves from the gun business, demanding that federal and state officials withdraw government contracts and urging GOP leadership to refrain from regulatory rollbacks that would help the firms.

Cramer and Kennedy are members of the Senate Banking Committee, where Chairman Mike Crapo (R-Idaho) has made clear that big banks should think twice about limiting credit to clients as a means of influencing social policy.

Let’s hope these Senators are successful. Because when Congress pushes Banks to implement their leftist policies disasters happen.