AOC Says That The U.S. Need Immigrants Because Of Low Birthrates And… Capitalism… 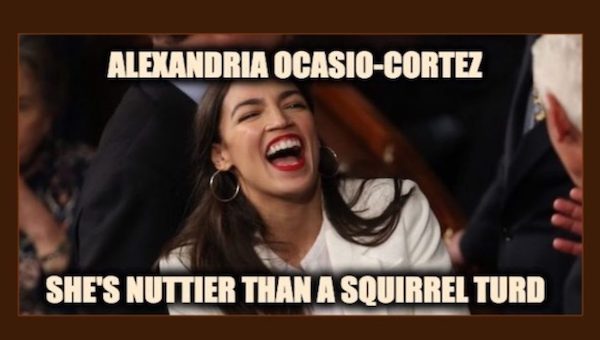 The pro-abortion feminist who said people shouldn’t have children because of the pending climate apocalypse is now talking about low birth rates.

Back in Feb 2019, during one of her Instagram live videos where she cooks and talks to her followers, Representative Alexandria Ocasio-Cortez (D-NY) said that young people are reconsidering having children because of the possibility of global temperature increases 1.5 to 2 degrees Celsius in the next century. She also manages to shoehorn in overwhelming student loan debt in her argument on why people choose not to have kids.

She doubled down later that same year by saying her “dreams of motherhood are bittersweet” because of the “climate crisis” and this time managed to blame a hurricane on climate change and the slow damage recovery, not on the well-documented incompetence and corruption of Puerto Rican politicians, but on colonialism.

AOC blames deaths from the hurricane on “colonial rule“

AOC suggests the U.S. is a “regime“ pic.twitter.com/Ef2Xei83xk

Fast forward to 2022, and the nearly 33-year-old still childless Congresswoman is complaining that people don’t have kids.

To be fair, AOC talks so much about so many things it’s no wonder she can’t keep her opinions straight.

In a brief clip shared on Twitter by RNC Research, the Congresswoman from New York’s 14th Congressional district weighed in on the need for the United States to welcome millions upon millions of immigrants, both legal and illegal, and — surprise, surprise! — it has to do with increasing the tax base to continue entitlements.

She doesn’t exactly say it that way, though. Instead, she argues that it’s because of the “burdens of capitalism” that are “concentrating wealth among the rich” that makes it difficult for people to provide for children, so they have fewer of them.

“We actually need immigrant populations to help balance these things out,” says AOC. “We can’t continue to fund Social Security, Medicare — all this stuff without immigrants. And it’s always been that way. Don’t act like this is some new trend or anything like that.”

Democrat Rep. Alexandria Ocasio-Cortez says because of the “burdens of capitalism” people can’t have kids. pic.twitter.com/jnceTNbJis

This sounds an awful lot like the thing the Regime Media called the “Great Replacement Theory” that they said was a dog whistle for racists. Biden Tells Americans To ‘Reject The Lie’ Of ‘Replacement Theory’ (VIDEO) The full video is less than five minutes long, and she begins with a critique of Republican politicians.

She then says that immigrants have made the United States prosperous before she backs off a bit because it sounded too much like she was saying that the country wasn’t a racist, misogynist, imperialist power that crushes the poor and downtrodden under its boot.

She then says that immigrants have made the United States prosperous before she backs off a bit because it sounded too much like she was saying that the country wasn’t a racist, misogynist, imperialist power that crushes the poor and downtrodden under its boot.

AOC then goes off on a rant where she says that “undocumented” migrants that violate immigration law and pay cartels to smuggle them into the country are the same as the people that go through the process legally with the high costs of both time and money.

“Your great-grandparents arrived and had their name misspelled” isn’t the same as people who destroy or discard their identification to jump the immigration queue.

She then touts her “diverse” New York congressional district and how immigrants are a vital part of it.

AOC swipes at Florida Governor Ron DeSantis and says that New York is a net contributor to the nation and “help” other states like Florida. With the post-COVID mass exodus from New York and the influx to the Free State of Florida, we’ll see how long that stays that way.

“So, just because your great-great-grandpa came into the United States on a Post-It note, doesn’t mean that he’s any better than the people arriving at Martha’s Vineyard today,” says AOC.

She then implies that the opposition to enforcing immigration law and not allowing economic migrants to abuse the asylum process is somehow racist.

“Just because the melanin has changed, doesn’t mean the people and the institutions are any different. They are a blessing to us,” says AOC.

She adds that if Florida “took a lesson from New York,” they might be able to contribute to the United States in terms of their taxes.

She is profoundly ignorant and clearly doesn’t comprehend the right-wing position on legal or illegal immigration.

She was lambasted on Twitter for her comments, but a handful is worth noting.

American Enterprise Institute Senior Fellow Tim Carney noted that AOC only suggested more immigration, both legal and illegal, instead of the apparent solution — encourage Americans to have kids.

NewsNation reporter Zaid Jilani posted a long thread that debunks AOC’s claim that the drop in birth rate is due to economics.

Radiologist and occasional contributor to several right-wing publications, Pradheep Shankar, said that people like AOC are “insane and should be treated as such.

I don’t know about you, but I’m with Pradheep on this one. She’s just so ridiculous.