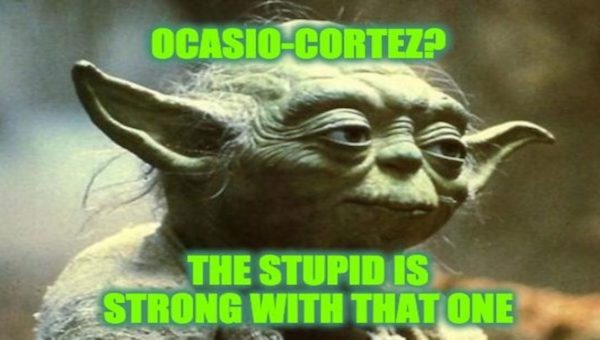 If Congresswoman Alexandria Ocasio-Cortez (D-NY) is one of the “normal” ones in Congress… boy, are we in trouble!

In a recent live-streamed video, the Representative from New York’s 14th District went on a rant on social media and targeted her colleagues and the institution she is a member of.

She was expressing her frustration about the inability to pass gun control laws in the wake of two very high-profile mass shootings in Buffalo, New York, and Uvalde, Texas.

It’s unclear what new gun control measures would have prevented either of the tragic incidents.

But AOC insists that gun control measures aren’t being passed because Congress is a “corrupt institution” that she is unfortunately now a part of.

“It’s just really wild to be a person that works in a corrupt institution, which is what Congress is,” said AOC in the Facebook Livestream.

“And to try and be a normal person surrounded by so much decay and moral emptiness —- that frankly transcends party —- is very difficult,” she added.

It’s been pretty clear that lobbyists, special interest groups, and the deep state agencies are the ones that run things in Washington.

She’s been in Congress for how long and is just understanding that it’s corrupt?

Wasn’t she tipped off when her Chief of Staff allegedly funneled a cool $1 million to his companies?

But we’re supposed to believe that she’s pure as the driven snow and she is the “normal” one.

Maybe she needs to cut ties with dark money before she starts waxing on about the corruption in politics.

You know that she’s just upset that the lobbyists on her side of the aisle aren’t getting what they want.

A different cut of the video that was circulating on Twitter shows that Rep. AOC was ranting about was the failure to pass gun control.

Rep. @AOC: “It’s just really wild to be a person that works in a corrupt institution, which is what Congress is, and to try and be a normal person surrounded by so much decay and moral emptiness, that frankly transcends party, is very difficult.” pic.twitter.com/x9hqvvpq8Y

From that video, she says that she was unable to sleep because of the children shot in Uvalde, Texas.

After she complained about how difficult it is to be normal amid such corruption, she added, “I was up until 5 o’clock in the morning last night… I could not sleep thinking about those babies and those teachers.”

While Democrats are obsessed with gun control, the real problem is some cases of severe mental illness.

According to the New York Times, the Buffalo shooter was held for a mental health evaluation last year, and a former federal agent appears to have known that it was coming but didn’t report it.

The Uvalde shooter had used knives to cut his own face “for fun” because he liked the scars, carried a bag of dead cats, and had a tendency of violence toward women — even saying that he would kidnap, rape, and kill girls that shunned him online.

Which gun control measure that is not already in place would have prevented this shooting?

This guy was a walking red flag — a teenage version of The Joker — and people around him knew it.

We see the failure to take seriously the clearly violent behavior of young men with mental health issues.

But AOC is blaming the lack of gun control.

CNSNews, an offshoot of the Media Research Center, has posted the full video, which can be seen here

It’s unbelievable that some people continue to take her seriously.