AOC: The Radical Left Will ‘Push’ Biden In a ‘More Progressive Direction’ 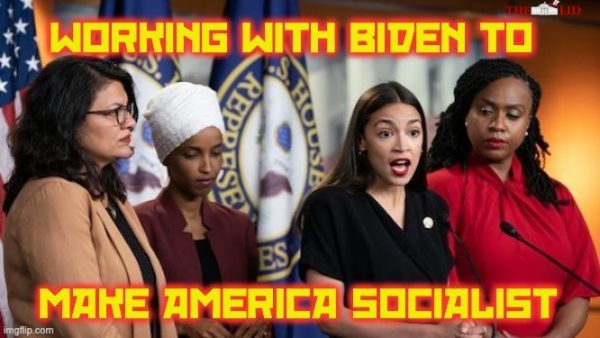 Rep. Alexandria Ocasio-Cortez admitted publicly what conservatives have been saying for months.  She believes that the more radical faction of the Democrat party can “push” Joe Biden in a “more progressive direction” should he (God forbid) win the election.

Ocasio-Cortez (D-NY) made the comments in an interview with Just the News.

The so-called Squad leader first agreed with the reporter that she shared concerns put forth by Senator Bernie Sanders (D-VT) about Biden’s campaign not being radical enough.

This is, after all, the same woman who once said she would “be damned” if the former Veep thinks a “middle of the road” approach to global warming is acceptable and complained that “in any other country, Joe Biden and I would not be in the same party.”

The Squad is Going to Push Biden

AOC believes the Squad can control Biden and get him to accept their fringe policies and platforms.

“What is most important is to make sure that we ensure a Democratic victory in November and that we continue to push Vice President Biden on issues from marijuana to climate change to foreign policy,” Ocasio-Cortez revealed. She added, “I think, overall, we can likely push Vice President Biden in a more progressive direction across policy issues.”

President Trump has been warning voters that “Biden is just a Trojan Horse for the radical left agenda” adding that, should he win the 2020 election, “will do whatever they want.”  aoc push biden

Putting Up a Front

Any concerns that Biden won’t be progressive enough for the likes of liberal Democrats are quickly allayed by the facts.

In July, Sanders, fresh off the release of a ‘unity platform’ that put forth “a good policy blueprint that will move this country in a much-needed progressive direction,” bragged that Biden might be the most progressive President in modern times.

The senator claimed that he had forced Biden to adopt many of his radical socialist policies.

“The compromise they came up with if implemented, will make Biden the most progressive president since FDR,” Sanders announced.

Socialist Sen. Bernie Sanders brags that the policies Joe Biden has adopted “will make Biden the most progressive president since FDR”https://t.co/Ej6m1Jqv7F pic.twitter.com/R2YwLo20kX

Aside from that, Biden is certainly on the same page with AOC and Sanders in many areas including:

AOC isn’t the only radical who thinks Biden will conform to the radical socialist agenda.

Democrat Rep. Ilhan Omar (D-MN) said Biden “is going to be responsive to the policy positions we are advocating for.”

Democrat Rep. Ilhan Omar says Joe Biden "is going to be responsive to the policy positions we are advocating for," renews calls for "dismantling" policehttps://t.co/T9vO0kb9iK pic.twitter.com/OMzg21LRrz

She also bragged that the far-left pushed Biden “much further” left towards government takeover of health care.

There is no doubt that, much as they control the House of Representatives right now, the Squad and the fringe left will be setting a socialist agenda should the Democrats control the White House.

Cross-posted with the Mental Recession   https://lidblog.com