AOC: America Should Not Have Authorized Military Force in Response to 9/11 Attacks 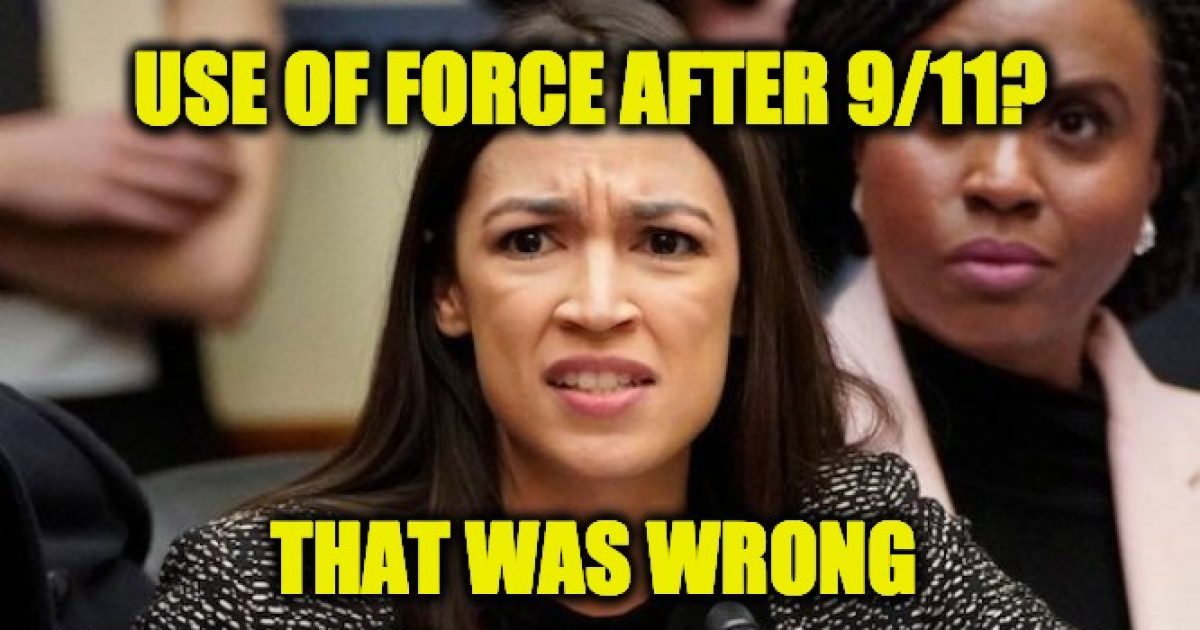 In a series of late-night tweets, Democrat Rep. Alexandria Ocasio-Cortez argued Monday that the United States shouldn’t have authorized military force against those behind the 9/11 attacks.

“It is disturbing that Rep. Omar continues to perpetuate hurtful anti-Semitic stereotypes that misrepresent our Jewish community,” Vargas stated. “Additionally, questioning support for the U.S.-Israel relationship is unacceptable.”

The New York socialist objected to the notion that one cannot question foreign policy, incorrectly claiming both major political parties were in agreement in ratifying an Authorization to Use Military Force (AUMF) for the Iraq War.

I‘m curious if Rep. Vargas will further explain his stance here that it’s unacceptable to even *question* US foreign policy.

Plenty of Dem members have asserted that discussion + debate on this issue is fair and merited. Is this stance a departure from that? https://t.co/2tcelsxFCU

I remember a time when it was “unacceptable” to question the Iraq War.

All of Congress was wrong, including both GOP & Dem Party, and led my generation into a disastrous + wrong war that virtually all would come to regret, except for the one member who stood up: Barbara Lee.

Shouldn’t Have Responded to Terrorist Attack

Lee was actually the lone dissenter on an AUMF voted on in the aftermath of the 9/11 terrorist attacks. The Iraq War resolution was objected by more lawmakers, passing the House by a vote of 297-133, and the Senate 77-23.

Ocasio-Cortez later corrected her tweet by saying it was the war in Afghanistan she was referring to, adding that “we shouldn’t have been in either” war.

The AUMF Lee objected to was voted on Septemeber 14th, 2001, just days after Osama Bin Laden and al Qaeda murdered thousands of Americans on U.S. soil.

(But honestly we shouldn’t have been in either, and we should end the AUMF now while we’re at it)

The History Channel explains why the AUMF was vital in fighting back against the terrorist organization that had just declared war on America at the time.

“Almost 3,000 people were killed during the 9/11 terrorist attacks, which triggered major U.S. initiatives to combat terrorism and defined the presidency of George W. Bush,” the site teaches.

Whatever point Ocasio-Cortez is trying to make in debating military action against the perpetrators of 9/11, she sorely lacks historical acumen.

Nobody debated the need for military action against al Qaeda in 2001 because it was an essential response to an act of war. Even Barbara Lee agreed, opposing the AUMF because it was too broad in allowing the President to take action further down the line, not because she opposed an actual military response.

“Like everyone throughout our country, I am repulsed and angered by these attacks and believe all appropriate steps must be taken to bring the perpetrators to justice,” Lee wrote in the San Francisco Chronicle at the time.

“We must prevent any future such attacks. That is the highest obligation of our federal, state and local governments. On this, we are united as a nation.”

We were united as a nation, anyway. Perhaps Ocasio-Cortez, who was just 11-years old at the time, could use a history lesson.