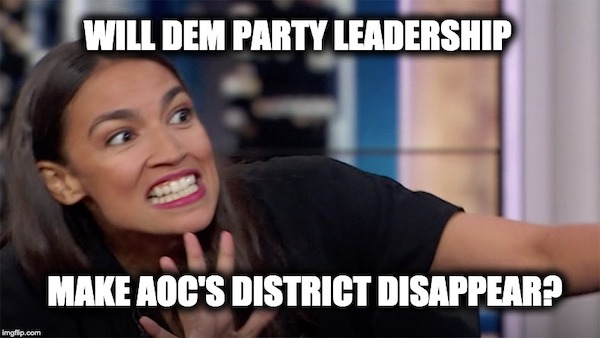 Nothing is official yet. The Census Bureau will announce the final count in December 2020, and the congressional districts will be updated for the 2022 elections.

Party leadership is not happy with AOC, which is why her district is in danger.

As we reported in January of 2019, Congressional Democrats were growing sick and tired of Alexandria Ocasio-Cortez’s antics, especially her use of Twitter to attack other Democrats and to get what she wants from the caucus.

Even some progressives who admire AOC, as she’s nicknamed, told Politico that they worry she’s not using her notoriety effectively.

“She needs to decide: Does she want to be an effective legislator or just continue being a Twitter star?” said one House Democrat who’s in lockstep with Ocasio Cortez’s ideology. “There’s a difference between being an activist and a lawmaker in Congress.

In  July, AOC used the race card against Speaker Nancy Pelosi. Responding to criticism from the speaker, she told WAPO:

“When these comments first started, I kind of thought that she was keeping the progressive flank at more of an arm’s distance in order to protect more moderate members, which I understood. But the persistent singling out … it got to a point where it was just outright disrespectful … the explicit singling out of newly elected women of color,” she told The Post.

AOC appears to suggest that Pelosi is targeting her because Pelosi wants her to get death threats: “It's singling out 4 individuals, and knowing the media environment that we're operating in, knowing the amount of death threats that we get …. I think it's just worth asking why” pic.twitter.com/cueiQi9XC8

When one adds the fact that in her first election she primaried and beat Democratic Caucus Chair Joe Crowley, who was seen as Nancy Pelosi’s heir apparent to the fact that she’s attacked the party leadership as much as the other party, it’s understandable why AOC fears being left without a district in 2022

There is something that may hold party leadership back from gerrymandering  Alexandria Ocasio-Cortez’s congressional district out of existence. In 2022 Chuck Schumer will have to run for re-election. If she is left without a congressional district, AOC may attempt to primary Schumer. And who knows? Schumer is very powerful, but NY is VERY liberal, and a Democratic Socialist like AOC may be their cup of tea.