The AOC Just Society Proposal Would Make Society Anything BUT Just 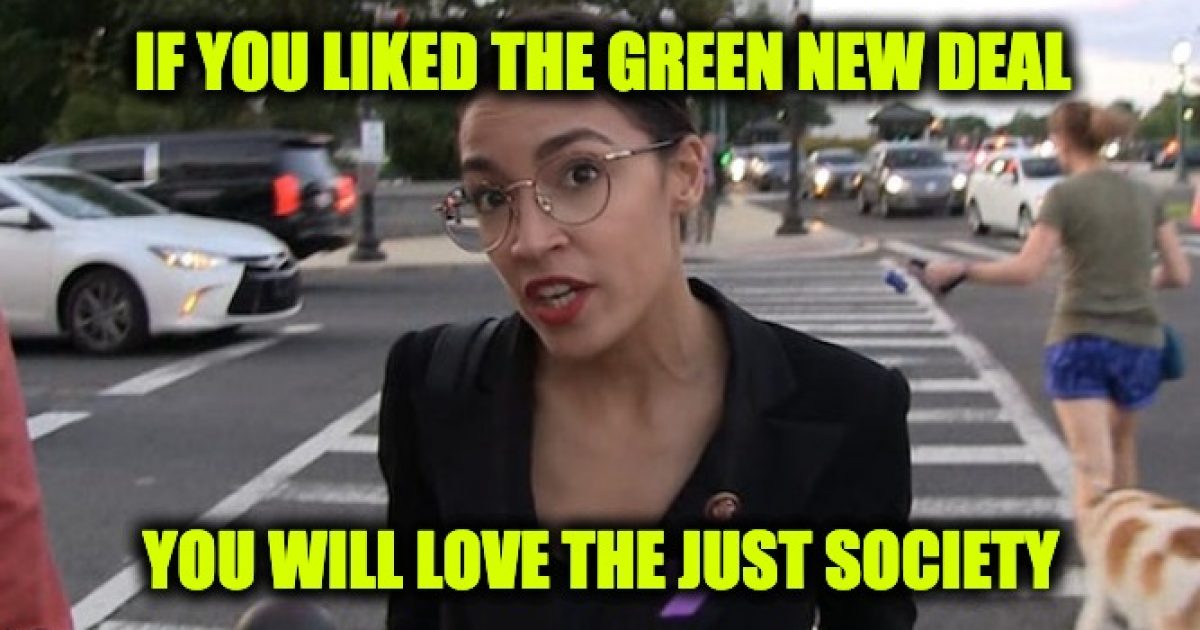 While the news has been dominated with talk of a whistleblower complaint and impeachment, a new proposal by AOC isn’t getting too much scrutiny. It should.

The proposal includes  5 Bills and 1 Resolution to enact a “Just Society.”

Just like the Green New Deal, it’s big on defining what AOC believes are the problems in America in 2019 — wealth inequality and specifically, poverty.  Unfortunately, the proposals are scant on any practical, implementable, and effective solutions but heavy on the socialism

The media on the left, however, are eating it up and loving it.

Exclusive: @AOC is rolling out her most ambitious legislative package since the Green New Deal pic.twitter.com/NS63UhhFQi

The 6 pieces of legislation are as follows:

The Recognizing Poverty Act directs the Secretary of Health and Human Services, in collaboration with the Bureau of the Census and the Bureau of Labor Statistics, contract with the Committee on National Statistics (CNSTAT) to propose a new official poverty guideline. This guideline would account for costs related to geographic variation, health insurance, child care, and “new necessities” such as internet access. This would ensure the accuracy of our current poverty measure, which determines eligibility for much of the social safety net including — Medicaid, Food Stamps, Family Planning Services, the Children’s Health Insurance Program (CHIP), and the National School Lunch Program.

Basically, this would redefine poverty not as a national standard, but by region taking into consideration the differences in the cost of living in different areas of the country. One family who makes Amount “X” in one region may qualify for social services while another family making the same amount in a different part of the country would not.

The Place to Prosper Act would protect low-income tenants and rein in corporate landlords by, among other things – creating an access to counsel fund for renters facing eviction, imposing a 3 percent national cap on annual rent increases, and imposing disclosure requirements on the nation’s largest landlords.

Rent control often causes housing shortages which limit the number of lower-income families in a geographic area as well as increases demand (and therefore increases rent) in nearby areas. Swedish economist, Assar Lindbeck, who chaired the Nobel prize committee for many years, reportedly declared that rent control is “the best way to destroy a city, other than bombing.”

3. A Just Society Is Merciful: The Mercy in Re-entry Act

The Mercy in Re-entry Act ensures that notwithstanding any other provision of law, an individual may not be denied any Federal public benefit solely on the basis that the individual was convicted of a criminal offense (whether under Federal, State, tribal, or foreign law).

So, social service benefits for convicted criminals that enter the country.

4. A Just Society Embraces Our Immigrants: The Embrace Act

The Embrace Act ensures that notwithstanding any other provision of law (including title IV of the Personal Responsibility and Work Opportunity Reconciliation Act of 1996), an individual may not be denied any Federal public benefit solely on the basis of the individual’s immigration status.

This would allow all illegal immigrants access to social services provided by the federal government. With the push for Medicare-for-all, this would make the United States the destination for anyone “looking for a better life” through government hand-outs.

You think there’s a rush on the southern border now — just wait and see what would happen if this bill gets passed.

The Uplift Our Workers Act would direct the Department of Labor (DOL), in collaboration with the Office of Management and Budget (OMB), to create a “worker-friendly score” – similar to LEED certification – for federal contractors. This score would consider factors including, but not limited to, paid family leave, scheduling predictability, hourly wage, and union membership. Thereafter, DoL and OMB are to provide federal agencies with recommendations on how to evaluate – and give systemized preference to – “worker-friendly contractors as it makes contracting decisions.

And we all know that in many cases, unions benefit the union bosses more than they benefit the actual workers who fork over hefty union fees out of their own pockets.

This would increase the cost of doing business as unions push for higher wages and increased benefits without regard to the impact on the company itself. Unionization has been one of the significant factors that caused the leak of jobs overseas where manpower is less costly.

6. A Just Society Guarantees the Economic, Social and Cultural Rights of All

This is the resolution in the proposal, and it’s pretty weird.

This resolution pretty much says, “Let’s just make everything a right whether it actually is one or not.”

This resolution would direct the Senate to give its advice and consent to the ratification of the U.N. Covenant on Economic, Social and Cultural Rights. This Covenant recognizes the right to just and favorable conditions of work, the right to form trade unions, the right to adequate food, clothing, housing, and the right to the enjoyment of the highest attainable standard of physical and mental health.

What does that even mean?

How is it implementable?

It would be nice to make sure that everyone has adequate food, clothing, housing, physical and mental health, but that’s not really possible.

Does she mean to implement new government subsidies for all of these things?

AOC wants to ensure that everyone has a high standard of mental health, but you can’t force someone to take medication for their mental health — so, what exactly is she proposing here?

And what of the highest attainable standard of physical health? Does that mean Gym-Memberships-For-All? Free groceries from Trader Joe’s and Whole Foods?

It’s all so vague.

What is clear, however, is that these proposals, if implemented, will do the exact opposite of their intention.

A Just Society- Summary by Jeffrey Dunetz on Scribd