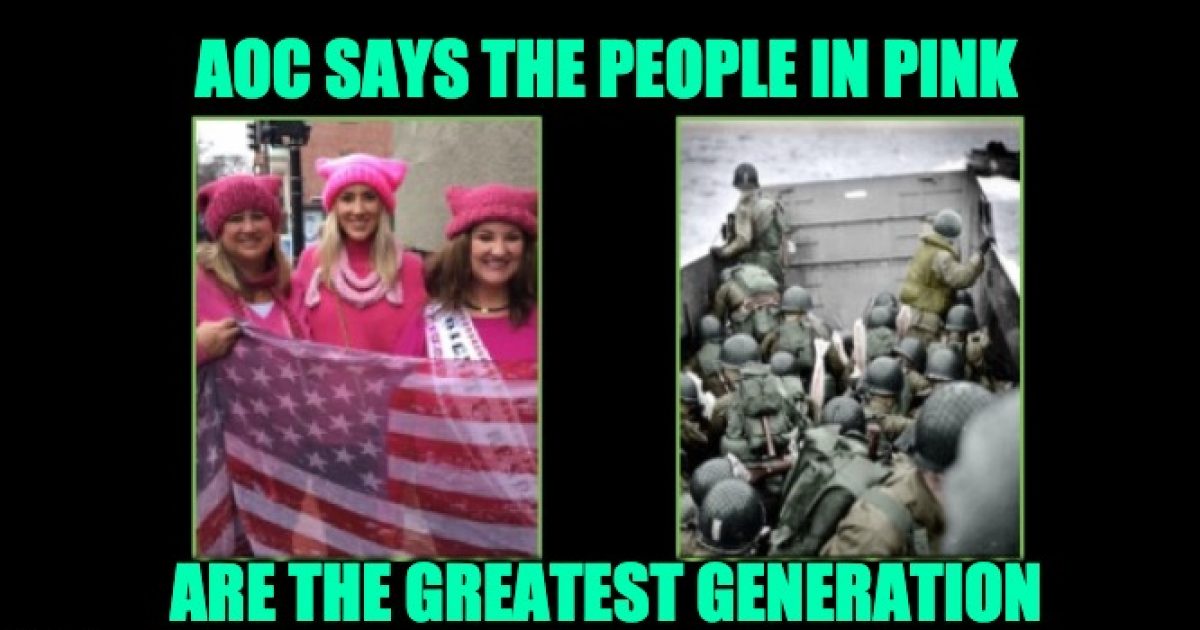 It’s called the Greatest Generation because these Americans grew up during the Great Depression and while the were still in their teens and early twenties they left their homes to fight in World War II, and those who stayed home contributed to the war effort. These men and women weren’t fighting for recognition or riches, they were fighting to save the world and that’s what they did.

Rep. Alexandria Ocasio-Cortez’s latest attempt to take away the biggest imbecile in congress crown from  Rep. Hank “Guam will tip over” Lewis (D-GA) is her claim that today’s Millennials are the greatest generation of all.

They’re not afraid to have those conversations. If anything, like I think they’re profoundly courageous because they’re willing to puncture more taboos and have conversations that, frankly, older generations sometimes struggle to have. Not everyone, I don’t want to paint everybody with a broad brush…

I think this new generation is very profound and very strong and very brave because they are actually willing to go to the streets. How about that?

.@AOC, you thank the Greatest Generation who won World War II for the peace and prosperity you enjoy today.

Allow me to add to the governor’s appropriate comments. Firstly, AOC is in congress, she should know we are not a democracy; we’re a republic. But that’s her least offensive mistake.

This dullard believes the everyone gets a trophy, no keeping score in baseball, no one gets grades, everything is done for them, hide in safe spaces with stuffed animals generation, who have never learned how to think for itself because they have been spoon-fed since birth Millennial generation is more noteworthy than the young Americans who took Omaha Beach on D-Day or the marines who raised the flag on Iwo Jima.

Rep. Alexandria Ocasio-Cortez proclaims that her generation actually takes time to read and understand our history. With her comments comparing Concentration Camps to where the Border Patrol houses illegal immigrant children already proves she can’t understand history.  If AOC had the slightest understanding of history, she would appreciate that the Greatest Generation and the other generations that came before her not only understood history, they made history.

The older generations changed the world and enabled today’s Millennial generation to be educated, have immediate access to information, better health and opportunities so they can eventually be elected to Congress, where they can forget all about the great people who made their lives possible.