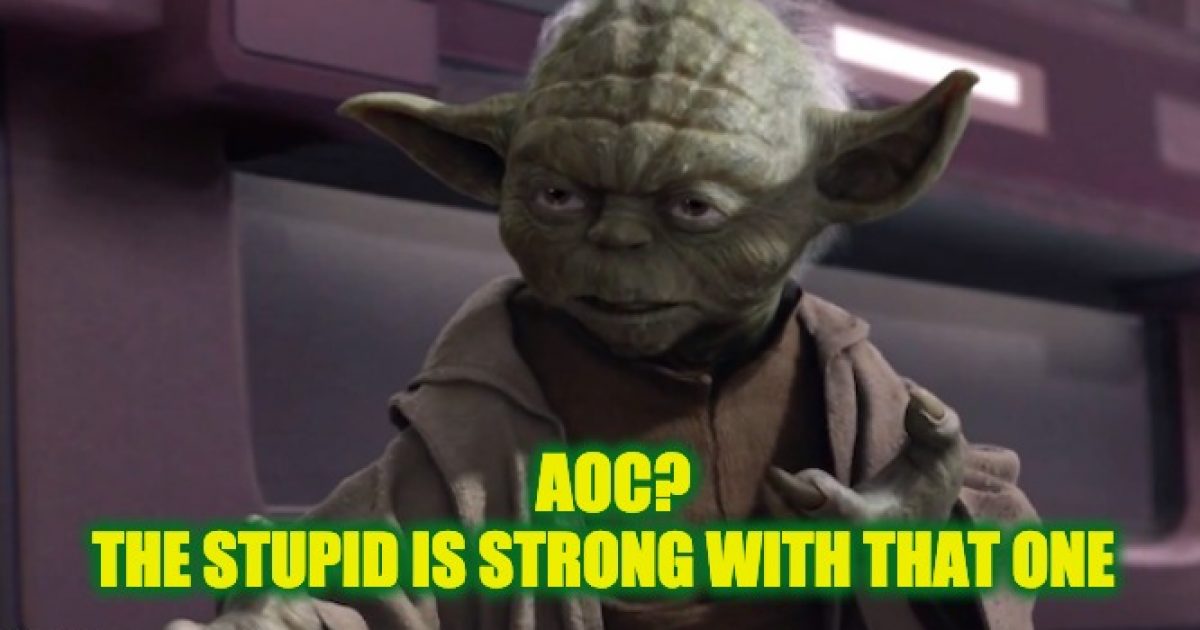 AOC keeps on giving, just like a good comedy show where the laughs are non-stop.  Except that AOC is more like stupid on steroids.  AOC’s gaffs and outright stupidity would actually be rather amusing if it were not for the fact that she has the power to cause enormous damage.  Then there is the fact that so many people actually follow this brain-dead high school girl, now that is just plain scary.

Remember how AOC’s insane leftist buds managed to kick a hilarious eight-year-old (‘Mini-AOC’) off of social media by doxing her and threatening to kill her?  This is the mentality and maturity of the Left folks – they hate you if you do not bow at the altar of liberalism.

How about this gem?  AOC went off on a tirade about how the horrid detention facility at the Southern border was making these poor women drink out of toilets.  Except that this was not the case at all.  AOC routinely distorts the truth for pure political gain.

Now AOC is giving illegals legal advice, or so she thinks.

“If people come knocking, you do NOT have to open your door unless there is a signed judicial warrant.”

If people come knocking, you do NOT have to open your door unless there is a signed judicial warrant.

Check the site above to learn how to handle your rights in 4 scenarios in 7 different languages.pic.twitter.com/PtH8Ngki55

Now, this guy had the same thought about AOC’s advice as I did.

“And how do you see this “signed” warrant without opening your door?”

And how do you see this "signed" warrant without opening your door?

Warrants were issued and once again the law was ignored. Thats why deportation occurs

Coaching criminals. That will look impressive on your resume.

AOC recently pretty much flat-out accused Nancy Pelosi of racism by saying that Pelosi singles out “women of color.”  When it became news, she seems to have done an about-face and denied it

Perhaps she wasn’t doing an about-face. It is quite possible AOC thought when the reporter asked her if Pelosi had racial animus, he was asking if Pelosi had a racist pet.

Blocking people on social media—esp as women, typically subjected to an avalanche of hateful and misogynistic speech online—is not a violation of their First Amendment rights. None of us have a constitutional right to use someone’s Twitter to abuse them.https://t.co/V0RiH8G5lD

Then Salazar turned around and said, Twitter is excellent for communication someone who represents you—well–except for Dov Hikind.

To me it’s clear: If you truly want to communicate with people elected to represent you—your own Congresswoman, Senator, Assembly Woman, Council Member etc—Twitter is not most effective route.

But Hikind is mad because tweeting at AOC is less cathartic for him if she blocks him.

Hmmm, so let’s see – the rules are great as long as they apply only to non-leftists, but when the very same standards are applied to the Leftists, that is not acceptable.  This is for sure not acceptable because it will impact her pet Leftist bud AOC.  Typical Leftist double standards.

In the latest AOC soap opera saga, it appears that the Left is fracturing, and war is imminent.  The opposing generals?  AOC and Pelosi.

I just mentioned AOC accused Speaker Pelosi of racism; well now it appears that AOC’s Chief of Staff (CoS) Saikat Chakrabarti, made some racially biased comments:

“Let’s not forget the fact that AOC’s CoS called a group of members racist. This is a group of members led by an immigrant woman of color, and this group includes several other people of color including two black men who actually experienced the segregated South.”

That shouldn’t be a big surprise because as we’ve reported at The Lid before, he seems to be a fan of Nazis.

I’m sure Saikat Chakrabarti knows all about the man who is on his t-shirt. If he doesn’t well, then he is an idiot like his boss.

And if we are talking about racism, why is she going after members of the Congressional Black Caucus, and they are NOT happy.

Here’s the bottom line, since she was elected in December, AOC has worked hard at alienating the rest of her party, but now that she has gotten personal with Pelosi, and gotten her progressive group to primary established Democrats, she is really stepping in dog turds now.

Get the giant bag of popcorn and let the fireworks begin, this is going to be entertaining.