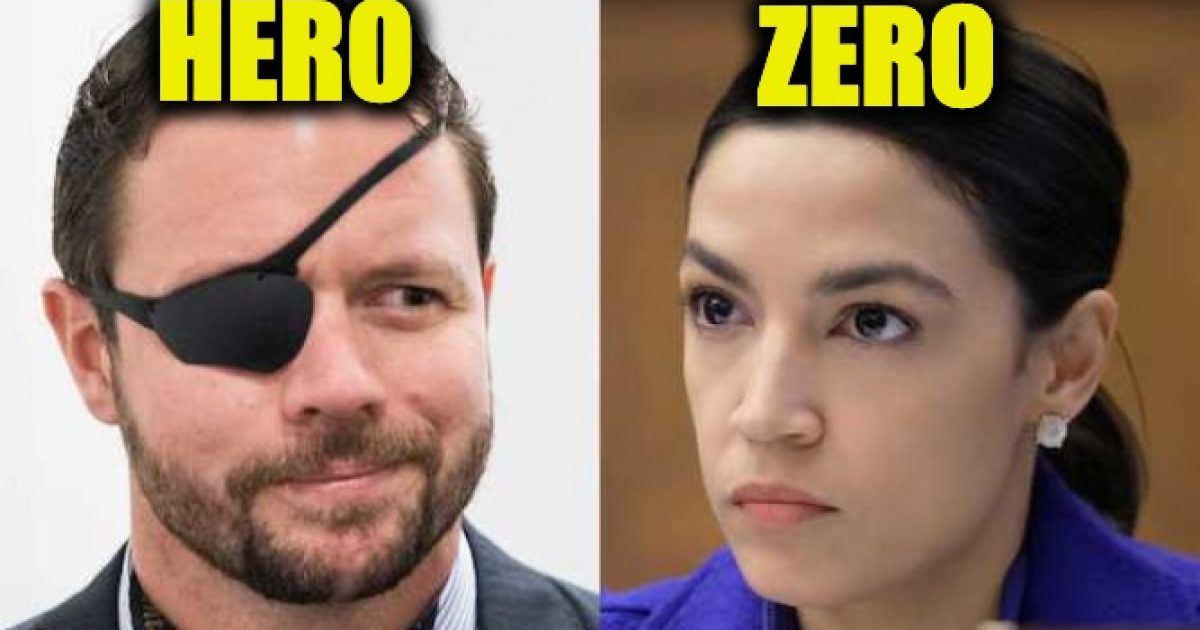 This latest crop of far left radical Democrats elected to Congress have spent an inordinate amount of time disrespecting the United States and those who served. Alexandria Ocasio-Cortez is a particular case in point. She jumped in to defend her left-wing “sister” Ilhan Omar, who trivialized 9-11. But in so doing, she told Rep Dan Crenshaw, a Navy SEAL veteran who lost his eye while fighting terrorism, to “go do something about domestic terrorists.”  The response to AOC was at times fierce, except for Rep. Crenshaw who repsonded in his usual gentlemanly manner.

Never one to use her brain, AOC responded with

You refuse to cosponsor the 9/11 Victim’s Compensation Fund, yet have the audacity to drum resentment towards Ilhan w/completely out-of-context quotes.

In 2018, right-wing extremists were behind almost ALL US domestic terrorist killings. Why don’t you go do something about that? https://t.co/rkb92IxkKX

The Omar quotes were not “out of context.” Those were her exact words: “some people did something.” Then there were more lies in her tweet:

Ocasio-Cortez did not state that Omar was only one out of 213 cosponsors of the September 11th Victim Compensation Fund Act, along with 42 Republican lawmakers.

Ocasio-Cortez’s claim that Crenshaw refuses to support the bill is also a lie. The bill has not even been voted on in the House and just because Crenshaw is not a cosponsor does not prevent him from voting in favor of the bill when a vote is held on it.

Ocasio-Cortez’s claim that Omar has “done more for 9/11 families than the GOP” is a blatant lie.

The backlash against her tweet was severe – and she won’t likely apologize or do anything to fix it. She appears to be so egotistical that she has no real respect for anything or anyone. She’s also lying about “right-wing extremists” being responsible for all domestic terror attacks.

“Right-wing terrorism is more deadly for Americans only if you add a number of very limiting parameters (e.g. excluding the victims of 9/11, ignoring “lone wolf” attacks without solid connections to groups like al-Qaeda and their affiliates, etc…). But if you lift those limitations, and apply equal standards, then the raw and unfiltered numbers of deaths of Americans due to Islamic extremism in the United States over the last fifteen years dwarf the numbers attributable to right-wing extremism by a ratio of over 62 to 1.” Study reported in IJR

But perhaps 62 is a number too high for the cerebrally challenged member of Congress.

Mr. Crenshaw did so something, he served his country, unlike you who only served watered down drinks to idiots at the bar! Why don’t you resign, you’re way under qualified and an embarrassment to your constituents! You’re as fake as your black accent!

My colleague from my days at MRC joined in on the action:

Watching a 29-year-old bartender criticize a war veteran who lost an eye fighting terrorists is hilarious, until you remember someone actually voted for this moron.

I can’t wait until your term is over. You are such a empty headed idiot. Right Wing Extremists? Don’t even start with that crap. It’s you so called tolerant lib tards that have been responsible for most assassinations and crazed murders in this country.

Were you born an idiot or is it something you work on every day? You have no idea what @DanCrenshawTX has done for America, nor do you have any respect for it. Go stand watch, in harms way, and come back home. You just might learn something about sacrifice! Dips*%t!!!

Telling a combat veteran that lost his eye FIGHTING terrorists in AFGHANISTAN to “do something” to help against terrorism. pic.twitter.com/xW4sYJYRU2

You’re a thousand times more likely to be killed by an illegal immigrant than by a right wing terrorist. Why don’t you go do something about that?

Rep. Crenshaw retired from the Navy SEALs after 10 years of service. Even after losing his eye from an IED blast in 2012, he deployed twice more to the Middle East and South Korea. He was awarded two Bronze Stars, a Purple Heart, and the Navy Commendation Medal with Valor. But he hasn’t done anything for 9/11 victims? Even a modicum of respect would have been nice.

Congressman Crenshaw responded to those who criticized his Rep. Omar tweet. Not only is he a hero who continues to serve his country, but he demonstrates he has something AOC will never have…Class.

“This is a really dishonest attack, and let me tell you how I am for 9/11 victims and 9/11 first-responders. I’m the guy who went overseas to make sure this never happens again, to take the fight to the enemy that committed these attacks I would go back and do it every day if I could. So to say that kind of attack, that is the height of partisanship and I’m really disappointed in them saying that.”

Watch Rep. Dan Crenshaw’s full response on the video below:

We think AOC should be deployed back to the bar.