Alexandria Ocasio-Cortez: If You Believed Me You’re Stupid 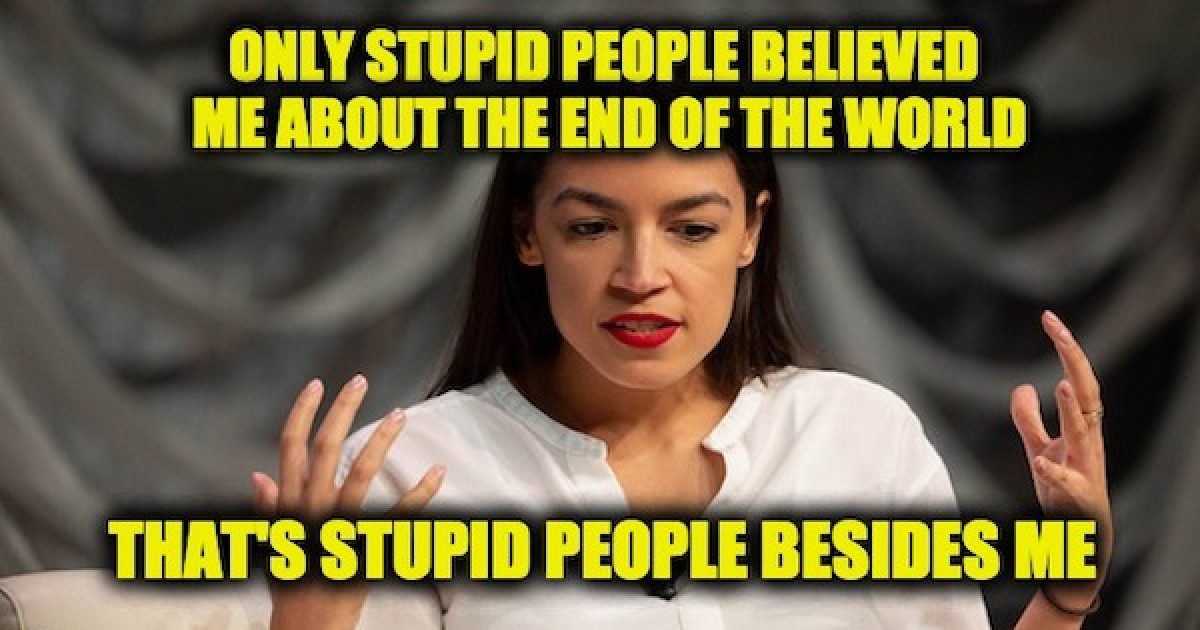 Oh Great! People went out and got 15-year balloon mortgages because Alexandria Ocasio-Cortez said the world was going to end in twelve years if we don’t fix the climate, and now she says it was all a joke!

“Millennials and Gen Z and all these folks that come after us are looking up, and we’re like, ‘The world is going to end in 12 years if we don’t address climate change, and your biggest issue is how are we gonna pay for it?

It’s almost five months years later, and now she claims she was just kidding. On Mother’s Day, May 12th AOC tweeted out an attempt to walk back her end of the world claim:

This is a technique of the GOP, to take dry humor + sarcasm literally and “fact check” it.

Like the “world ending in 12 years” thing, you’d have to have the social intelligence of a sea sponge to think it’s literal.

But the GOP is basically Dwight from The Office so who knows.

This is a technique of the GOP, to take dry humor + sarcasm literally and “fact check” it.

Like the “world ending in 12 years” thing, you’d have to have the social intelligence of a sea sponge to think it’s literal.

But the GOP is basically Dwight from The Office so who knows. https://t.co/pmkwrdeAnq

Firstly AOC made the claim to a liberal audience.  She made the remark during an interview with writer Ta-Nehisi Coates at the MLK Now event in New York City celebrating the legacy of Martin Luther King Jr. The audience believed she was serious and AOC  got applause after she said it (see video below). Ocasio-Cortez wasn’t using sarcasm. Heck, based on her track record it’s surprising she knew what the word sarcasm meant. Maybe someone had to explain the meaning of the word sarcasm to her before she wrote the tweet.

The Dwight character from the Office was a power-hungry sycophant. Kind of like the way AOC has acted since she took office. Ignoring leadership and threatening to primary others in the Democratic caucus.

Was she really being sarcastic? Or was she just hurting from the political beating she received after the 12-year claim?

For example, Sarah Huckabee Sanders responded to her dozen years statement with

“I don’t think we’re going to listen to [Ocasio-Cortez] on much of anything — particularly not on matters we’re gonna leave in the hands of a much, much higher authority — and certainly, not listen to the freshman congresswoman on when the world may end”

The day after AOC defended her claim she tweeted,  “For some reason, GOP seems to think this is a gaffe, but it’s actually a generational difference.” She even gave the UN as the source of her dozen years claim.

For some reason GOP seems to think this is a gaffe, but it’s actually a generational difference.

I will concede that when she made the video with the Intercept and Naiomi Klein about how her Green New Deal saved the world in less than twelve years,  I treated it like a joke…but AOC didn’t, and neither did Klein or The Intercept.

Climate change is here + we’ve got a deadline: 12 years left to cut emissions in half.

A #GreenNewDeal is our plan for a world and a future worth fighting for.

How did we get here?
What is at stake?
And where are we going?

As reported by The Washington Free Beacon, AOC doubled-down on her Chicken Little declaration during an Instagram live-stream when a viewer mocked her over the claim.

“We have twelve years left to cut emissions by at least 50 percent if not more,” Ocasio-Cortez, visibly annoyed, told her viewers. “For everyone who wants to make a joke about that, you may laugh, but your grandkids will not, so understand that the internet documents everything.”

She’s correct the internet documents everything. Including the fact that she wasn’t joking when she made the claim on January 22, or any of the other ignorant things Ocasio-Cortez has said since she came into the spotlight.

And that is the saddest part of Alexandria Ocasio-Cortez walk-back of her end of the world statement. If you ask all the people who saw her tweets and videos about the fix climate change in less than a dozen years warning, Ocasio-Cortez is one of the few people dumb enough to believe her Mother’s Day claim that she was just kidding.