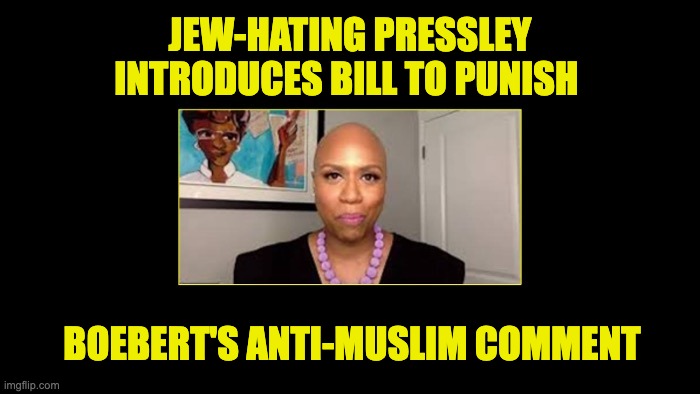 In the latest example of a Democrat calling the kettle black, Rep. Ayanna Pressley (D-MA) who is a supporter of the Anti-Semitic BDS movement announced that she introducing a resolution, cosigned by other progressives, that would strip Lauren Boebert (R-Co) of her committee assignments for her insensitive anti-Muslim comments toward Rep. Ilhan Omar (D-MN) another Democrat with a history of Antisemitism.  Anti-Semite Ayanna Pressley

Like Omar, Pressley has a history of anti-Jewish statements.  Along with being a supporter of the anti-Semitic BDS movement, Pressley to drop the Iron Dome funding in a spending bill. Iron Dome is a purely defensive system that prevents terrorist missiles from landing in Israel (and Israel purchases the equipment from an American company).  The only reason to object to the program’s funding is a desire to see more dead Jews. In May of this year, she supported Hamas terrorism saying it was a consequence of years of military occupation. Hamas controls the Gaza strip, Israel pulled out of Gaza sixteen years earlier in  August 2005 when Israel pulled out of Gaza. v

Boebert’s statement was inappropriate and can be interpreted as anti-Muslim. During Congress’s Thanksgiving break, Rep Boebert was caught on camera making a  tasteless statement to her supporters:

Over the Thanksgiving break, Lauren Boebert said she was recently in a Capitol elevator with Ilhan Omar when a fretful Capitol police officer ran up.

Lauren Boebert said: “Well, she doesn’t have a backpack. We should be fine.”

Even if she didn’t mean it as hate speech, Boebert’s words were unbefitting of someone in Congress, actually unbefitting anyone who believes in the principles of this great country.

However, if Pressley wants to punish Lauren Boebert for her words against the Muslim Rep. Omar, she and other members of the Democratic Caucus should have their committee assignments pulled for their Antisemitism.  Here are just a few of the many examples;

Rep. Ilhan Omar (D-MN) got in political trouble when she made anti-Semitic comments in 2019. Her Democratic colleagues were going to pass a condemnation, but the Congressional Black Caucus objected.  Pelosi capitulated and passed a tepid resolution that didn’t mention Omar or Antisemitism. It refused to condemn Jew-hatred. Instead, it simply said being mean to others is a bad thing.  Really?  As a child, I learned that lesson when watching programs such as Romper Room, Howdy Doody, and Captain Kangaroo. The Jew-hating Rep Omar not only voted for the measure but celebrated it as a step toward fighting Islamophobia. Omar and the other anti-Semites in the Democratic Party celebrated, indicating that they took the vote as a sign that Jew-hatred is okay.

Hank Johnson (D-GA) called Jews termites before Louis Farrakhan did. At an event at the 2016 Democratic Convention, Johnson, who once worried that too many marines on the island of Guam might tip it over, called Jewish people who live in disputed territories “termites” that destroy homes. Johnson said it at an event during the 2016 Democratic Convention. Johnson is also a BDS supporter.

Rep. Maxine Waters (D-CA)  In 2019 a video was released of Waters embracing Louis Farrakhan. Asked multiple times whether she still supports the anti-Semitic Nation of Islam leader, Waters refuses to answer. At a 2012 luncheon,  Waters announced her belief in one of the anti-Semitic canards, she said she won’t take money from AIPAC explaining she believes the anti-Semitic canard that AIPAC has too much power over Congress. If AIPAC had all that power Maxine claims, her anti-Semitic ass would have been out of Congress years ago.

Rep.James Clyburn (D-SC) supports the Jew-hating Louis Farrakhan. Clyburn told Farrakhan’s hate magazine “Final Call” that he was “not bothered in the least bit” by those criticizing him for appearing at the event with the Jew-hating Farrakhan. Since then, Clyburn has debased the Holocaust by using it as a political weapon and slammed the children of Holocaust survivors who objected to Rep. Omar’s Antisemitism.

Rep. Danny Davis (D-Il)  A friend of the anti-Semitic Farrakhan. “The Daily Caller” reported that “Davis went on the record twice to defend and praise Farrakhan.” He called Farrakhan an “outstanding human being” and says he regularly visits Farrakhan, including his home. Davis has also said he wasn’t bothered by Farrakhan’s answer to “the Jewish question.” In other words, his Antisemitism.

Rep. Jamaal Bowman (D-NY) in his victorious campaign against incumbent Elliot Engle, Bowman, blasted Engle for his close relationship with Israel. In May 2021, he called for more restrictions on U.S. aid to Israel. On November 29, after a trip to Israel, implied that Jews were crazy because of the Holocaust, “I felt a tension in Israel, from the Jewish community, the psychology of occupation impacted the Jews who live there who are free… .there’s a history of complex trauma that people are living with every day. Yad Vashem brought that home to me.” For those who aren’t familiar with it, Yad Vashem is Israel’s official memorial to the victims of the Holocaust. Bowman was basically saying that Jews are crazy because of the memory of the Holocaust.

Rep. Rashida Tlaib  (D-MI) said, “There’s always kind of a calming feeling I tell folks when I think of the Holocaust and the tragedy of the Holocaust,  Not that she really cared because when debating a congressional bill banning the anti-Semitic BDS movement, she accused the bill’s Jewish supporters of the ancient dual-loyalty slander. She said They forgot what country they represent.” In 2020 Tlaib pushed another ancient anti-Semitic slander, the centuries-old blood libel. Tlaib retweeted an unverified claim Israelis killed a Palestinian boy, and then when the claim was proven to be a lie said nothing.

Rep. Cori Bush (D-MO) is not only a supporter of the BDS movement, but she has refused to be interviewed by the Jewish Light, a Jewish newspaper in her congressional district.

Rep. Jim McGovern (D-MA)  has demanded that Israel negotiate with Hamas despite Hamas’ continued terrorism, firing rockets into Israel, and Hamas’ refusal to recognize Israel as a Jewish state.  Based on the Hamas charter, the only thing Israel can deliver to make the terrorist group happy is the deaths of all the Jews in the country. But McGovern doesn’t care.

The BDS movement itself is anti-Semitic. It is political warfare used against Israel, intended to isolate it economically, culturally, and politically. BDS is not about disagreeing with the policies of an elected Israeli government. Heck, many Israelis have problems with their government’s policies. That’s why there were four elections in the past two years.  The BDS movement has just one purpose, to delegitimize Israel and deny the Jewish people their right to self-determination. That in itself is Antisemitism. Many world leaders who are not Jewish agree that BDS is a form of Jew-hatred. These include  Pope Francis, Canadian Prime Minister Trudeau, former U.S. President Donald Trump recognized the International Holocaust Remembrance Alliance (IHRA) definition of Antisemitism which includes “denying the Jewish people their right to self-determination. U.K. Prime Minister Boris Johnson agreed about the link between BDS and antisemitism,

That said, many people in the Democratic caucus besides Pressley and the others mentioned above are supporters of the BDS movement, including those above and Rep. Alexandria Ocasio-Cortez (D-NY), Rep. Mark Pocan (D-WI), Rep. Raul Grijalva (D-AZ), Rep. Andre Carson (D-IN), and others.

This raises some critical questions. Will speaker Pelosi allow Rep. Pressley’s bill to strip Boebert of her committee assignments to reach the house floor? Racism and Islamophobia are wrong wherever it comes from, but why doesn’t she care about Antisemitism which is much more common in the House?

There are anti-Semites in the GOP caucus, however, they are rare and are condemned by the party. For example Rep. Thomas Massie (R-KY). Massie has a track record of anti-Israel and anti-Semitic votes and was opposed by the Republican Jewish Coalition (RJC) when he was primaried the last time he ran for re-election. Massie proves that even a party that leads the fight for Israel’s ability to protect herself and fights against Antisemitism can have a hater. It also proves that the RJC  fights against haters no matter what their party. Their Democratic equivalent (JDCA) supports anyone with a “D” no matter what their stance on Jewish issues Heck, Jewish Democrat org. even supported the anti-Semitic/ anti-Israel, Democratic party President Barack Obama.

I don’t believe speaker Pelosi is an anti-Semite. But her indifference to the hatred of Jews coming from her own caucus encourages more Jew-hatred. Not only should Rep. Pressley’s bill to strip Rep. Boebert of her committee assignments never reach the House floor, but the speaker should take action against the Antisemitism coming out of her own caucus.