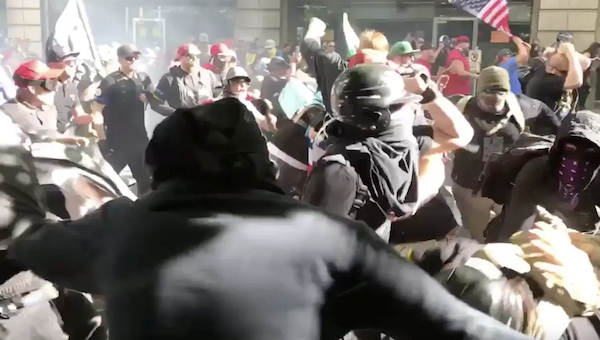 Portland’s mayor has been routinely criticized for his kid-glove approach to these riotous rabble-rousers. This egregious display will likely damage his reputation for capitulation.

The city of Portland, Oregon, has been in various states of rage for several years now, as left-wing provocateurs continue to turn peaceful protests into violent riots nearly weekly.

The latest fracas has again demonstrated the Portland government’s unpreparedness, with alleged members of the alt-left group Antifa overwhelming the police there.

By the time officers had “sufficient resources” to establish a crime scene near Southwest 3rd and Main Street, the black-clad demonstrators had already dispersed after hurling smoke grenades, paint-filled balloons, and fireworks, according to police. Two were injured by “mortars,” police said.

Pulliam had no problem telling it like it is.

“This is what happens when a Republican dares to hold an event in Portland to talk about funding our police. Antifa shows up,” Pulliam tweeted along with footage of the incident.

Portland has been almost a home for Antifa, with one attack every two months, including burning a courthouse, beating an old lady and a disabled veteran. And Democrats in Congress don’t believe Antifa exists Jerrold Nadler, for example. Jerry Nadler says Antifa is Imaginary, specifically for the people in Portland. Jerrold Nadler says Antifa Violence in Portland is a ‘Myth.’

Portland’s mayor has been routinely criticized for his kid-glove approach to these riotous rabble-rousers. This egregious display will likely damage his reputation for capitulation.