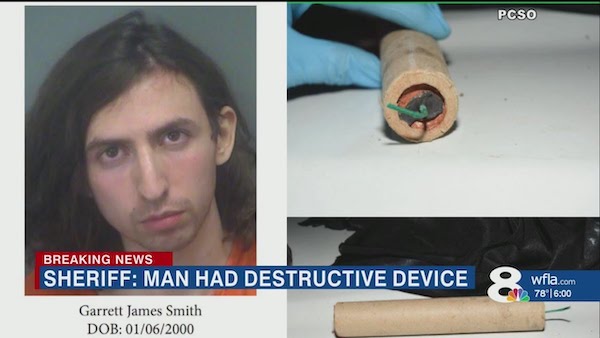 According to Pinellas County Sheriff Bob Gualtieri at a press conference, Garrett James Smith, 22, ran away from the rally area when Pinellas County deputies saw him at around 7:30 p.m. He was arrested nearby as he was wearing all black clothing and a black backpack. Upon searching the backpack incident to his arrest, deputies found an explosive device inside. They notified the Hillsborough County bomb squad, who determined the device was active. They searched his car, which contained numerous M-80 fireworks. It is unclear what caused Smith to bolt from the rally area. The Antifa member arrested also recently went to Portland, Oregon, where large numbers of Antifa reside. Antifa member arrested with explosives.

The Sheriff’s deputies then obtained a search warrant for Smith’s home, where they found another pipe explosive device, nails, and several hand grenade-type devices in his bedroom. The Antifa member arrested refused to speak with deputies, which is also in keeping with Antifa practices. He is held in the Pinellas County jail on a $300,250 bond.

“Smith has no criminal history, no social media accounts that we can find, and there’s no prior intelligence information about Smith. Smith is what we call a sleeper, and these are the most concerning individuals because there’s no opportunity to intervene and thwart their criminal activity until they actually act. We’re fortunate in this situation that something caused Smith to flee before he ignited the explosive device and the deputies were able to apprehend him.”

Though the Sheriff stated they had no idea what Smith’s motives were or what political persuasion he was, for those who know what Antifa is and who they attack, we can assume he was there to harm the rally participants. Why did he run? Good question.