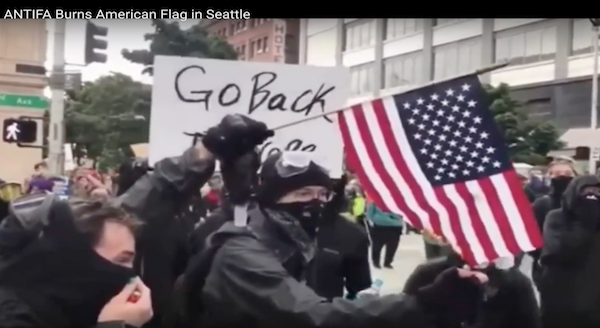 One of the groups on the counter-protest side in Charlottesville Saturday was the liberal hate group ANTIFA (short for anti-Fascists). According to this group, anyone who disagrees with them is a Nazi.

This liberal extremist group was certainly not the majority of protesters on Saturday, nor were they even a sizable minority, and their presence in no way excuses the violence from Neo-Nazis, KKK, or the animal that ran down people with his car. But it is certain that they contributed to the violence. But it’s important to note that the supposed anti-fascist movement is just as much of an evil group of extremists as the white supremacist groups.

The day after Charlottesville, the extremist group was in Seattle–attacking the police for keeping them away from regular conservative-types who they consider “Nazis.” Because the police protected the conservatives from the “Anti-Fascists”  attacks, the hate group began to attack the cops as “Nazi-sympathisers.”

Below are just a few examples of their violent actions and a report about their attack on the Seattle police:

The reason they attacked police yesterday is simple: the police acknowledged both sides the right to assemble in public and speak freely. The media portrays this as the liberal hate group and police clashing. But there is little doubt that the police were defending themselves after they were attacked for protecting conservatives. Naturally, the media tries to disguise what happened.

The rally’s organizer, Joey Gibson of the pro-Donald Trump group Patriot Prayer, told a crowd gathered at Westlake Park in downtown Seattle that he was against white supremacy and wanted everyone to have his or her chance at the microphone.

A parade of people denouncing Trump and white supremacy — and chanting “Black Lives Matter” — followed. So did a woman who identified herself as a pro-Trump Kurd.

On the street — on the other side of a metal barricade — counter-protesters faced off with police. One image showed black-clad demonstrators inches from officers in black tactical gear who were draped in pink and green Silly String.

A protest organizer told NBC affiliate KING that police attacked and blocked them from entering the rally.

“I think what they did today was actually a huge disgrace,” the unidentified organizer told the station. “Their job is not to protect Nazis.”

Earlier, Gibson said he would urge his supporters to remain nonviolent during the so-called “Freedom Rally,” which was billed as an event to “promote freedom, free speech, and the power of the human soul.”

Parts of this post was originally seen at Eagle Rising.