The Biden Administration Is Set To Give Science Grants Based On “Racial Equity," Instead Of Science 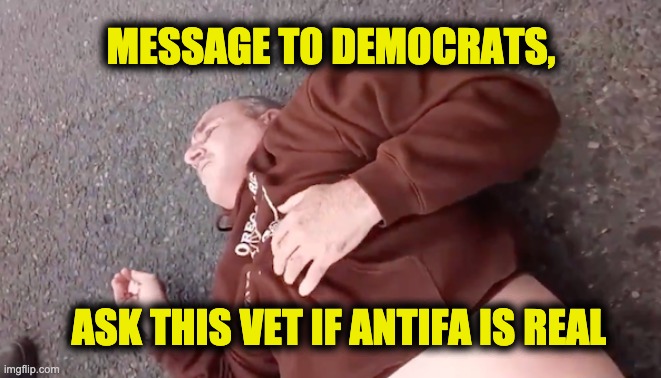 A Disabled Portland Veteran, Joe Hall, 53, was surrounded by armed BLM/Antifa during a so-called “protest” on May 6. When one of them pointed a weapon at him, he took out his own handgun and pointed it at the ground, telling them that if they continued to do that he would remove the threat. They stole his weapon, some tools, and his keys, and beat him so severely he had to be transported to the hospital. Injuries: collapsed left lung, 5 broken ribs, dislocated shoulder, broken clavicle, head trauma, and possible spinal injuries. (The Epoch Times)

The attack on a disabled Portland veteran.
Mr. Hall is a veteran of the Marine Corps and Army Reserves. He is a handyman, which is his personal business. He has filed a police report, but as we know that may not have much effect, since the DA keeps letting people off of any charges.

A rare second angle of the assault on the Marine shows him clutching at his broken ribs and collarbone while offering that he's diabetic. Despite his insistence that glucose is incorrect medication for his ailment, Antifa–BLM militants force him to take three doses at gunpoint. pic.twitter.com/rTNODmHseN

Gee, ANTIFA terrorists sure like using the “F” word.

Per the Portland Police:

Additional calls came in from people who had been driving vehicles in the area and who were blocked by the crowd in the street. One person said people in the crowd broke out their vehicle windows, damaged tires, and sprayed them with some kind of irritant near North Interstate Avenue and North Killingsworth Street.

A PERSON IN ANOTHER VEHICLE BLOCKED BY THE CROWD NEAR NORTH ALBERTA STREET AND NORTH MICHIGAN AVENUE GOT INTO A DISPUTE WITH PEOPLE WHO SURROUNDED HIM AND TOOK A FIREARM FROM HIM, AS WELL AS TOOLS AND KEYS.]

A person in another vehicle blocked by the crowd near North Alberta Street and North Michigan Avenue got into a dispute with people who surrounded him and took a firearm from him, as well as tools and keys.

A person in another vehicle blocked by the crowd near North Alberta Street and North Michigan Avenue got into a dispute with people who surrounded him and took a firearm from him, as well as tools and keys.

Portland Police attempted to collect as many statements as possible from those involved. Officers will document as much of the incidents as witnesses share and will attempt to gather available evidence, including video for follow-up on any criminal allegations.

One person was transported by ambulance to the hospital following one of the altercations.

#Portland
“You f***ed with the wrong group of people!” scream Antifa militants as they smash up this person’s van and hold them at gun point.

The disabled Portland veteran says he is leaving Portland and wonders why police didn’t intervene when they had “additional calls” about the situation. They’re trained not to do anything by a city ruled by the likes of Mayor Wheeler, who now claims he wants people to “take back” the city. But after years of “woke” politics, it’s likely too late for a peaceful “take back.” Antifa and BLM in Portland are now armed, and there is a great deal of power in criminal behavior, at least until what goes around comes around. People are leaving the city in droves because they feel unsafe.

“I’m done, I’m done working in Portland. I’m shutting my business down and I’m probably not going to be coming back.”