So It Is To Be War Between Us 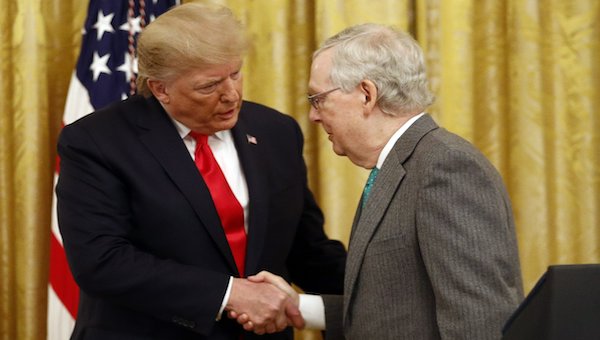 There is little doubt that the GOP is amidst a somewhat tense civil war, particularly given the political calculus in play over the next 3 years. Anti-Trump Republican

Many are predicting that the inability of the Biden administration to accomplish much of anything will likely deliver the House and Senate squarely to the Republicans in the 2022 midterms. This will make the 2024 presidential election all the more crucial, especially as it appears quite likely that Donald Trump will be involved in that affair.

It’s a sad battle for the country. As President Trump came up with the programs to “make America great again.” Mitch McConnell got Trump’s programs passed in the Senate, especially the federal court system. Not just the Supreme Court but the entire federal courts. When they were able to work together, they were a great team.

The latest volley in the inside battle was Mitch McConnell donating money to the most anti-Trump member of congress, Liz Cheney (R-WY)

Cheney, who is no longer recognized as a Republican by the Wyoming GOP, has received a campaign contribution from the Senate GOP leader, McConnell told Axios. When asked if he will hold a fundraiser or other campaign event with Cheney, McConnell redirected the conversation back to his lane of Senate business.

Cheney is not popular in her state. She has expressed her dislike of Trump, but she represents a state where President Trump got 70% of the 2020 Presidential election vote. No matter what her personal views are, it seems that Liz doesn’t care about the opinions of her constituents;

Cheney and McConnell appeared to take a fairly succinct shot at the MAGA Movement.

McConnell and Cheney apparently believe the Wyoming member may lose her seat to Trump-endorsed Harriet Hageman, a strong threat to the establishment Republican order in Washington, DC. With Hageman catching momentum heading into the August 16 GOP primary, former President George Bush has also donated the legal maximum amount to Cheney. McConnell and Bush are joined in their support of Cheney by failed presidential candidate Mitt Romney (R-UT). In March, Romney delivered a speech at a closed fundraiser for the embattled Cheney.

The move will surely send reverberations throughout the already raucous right-wing of the Republican Party. If Trump wins back the presidency in 2024, “Fasten your seat belt. It’s going to be a bumpy” flight.