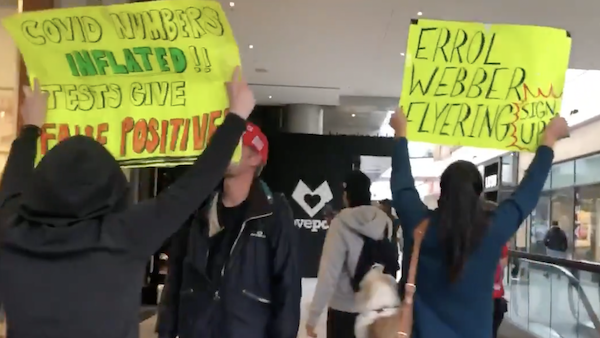 Over the course of the last several months, Americans have been engaged in several rather heated arguments with one another, and on a national scale.  The pressure of the COVID-19 pandemic, along with the stress created by its enormous economic impact, has pushed a great many of us into tense moments with our friends, families, and neighbors.  Those arguments often center around the use of face masks to prevent the spread of the deadly illness, or, more accurately, our government’s ability to mandate their use. anti-mask protesters

This week, a group of anti-mask protesters decided to take a stand, and their actions were captured on social media.

Anti-mask protesters aggressively approached shoppers at a Ralph’s grocery store in Los Angeles’ Century City neighborhood and then moved to the nearby Westfield mall, leading to minor altercations and the police at times intervening.

The protest, captured in a series of videos from a Twitter thread Sunday and livestreamed by the protesters, took place as Los Angeles COVID-19 cases soar, as safer-at-home orders remain in effect and as Southern California ICU are stuck at 0% availability.

At the Ralph’s grocery store, one female protester falsely claimed a man hit her and began pursuing the man with a shopping cart as other protesters shouted. The woman then was seen kicking the man. Another protestor called a shopper a “mask Nazi” and said he didn’t have to wear a mask because he had tested negative for the virus.

The protest then moved to Bloomingdales and other stores throughout the Century City mall. Protesters were asked to leave various stores and had a brief dance party to the tune of YMCA in the corridors. When one shopper says that her father was in the hospital with COVID-19, the man shouted back that, “People die. Your father’s not special.”

Video of the incident was soon going viral.

A group of anti-maskers did maskless shopping today at a Ralph’s and the Westfield Century City Mall. They got into some verbal altercations w/ store employees and there were a couple of physical altercations as well. Here, they tried to push open the doors of a Steve Madden. pic.twitter.com/njIYPaFMNJ

Today, a group of anti-maskers protested at Ralph’s and the Century City shopping mall. Lots of angry confrontations with customers and a few physical altercations.

California has been one of the stricter states in the nation as it pertains to curbing the spread of coronavirus, with several lockdowns and ordinances in place as we speak.