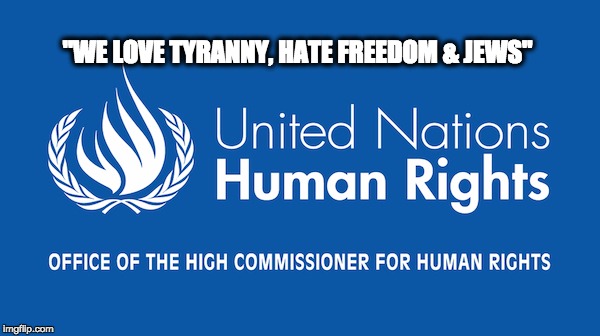 by Onan Coca and Jeff Dunetz

Hillel Neuer and his team at UN Watch are doing important and life-saving work by attempting to hold the United Nations accountable for their anti-liberty rhetoric and their anti-Semitic behavior. Most recently, Neuer was given the opportunity to speak before the UN Human Rights Council (UNHRC) to discuss yet another report and vote to condemn Israel, and he shamed them into silence

The report was commissioned by the ESCWA, a UN committee composed of 17-Arab states plus Palestine. It was co-authored by ESCWA Executive Secretary/ Jordanian diplomat Rima Khalaf and the anti-American, anti-Semitic, anti-Israel, Richard Falk. The report’s conclusion was that state of Israel as an “apartheid state,”

The report labeling Israel as “Apartheid.” was immediately and rightfully rebuked by U.S.Ambassador to the UN Nikki Haley who called “biased” and “deeply offensive.”

“The United States is outraged by the report,” said Haley in a statement. “The United Nations secretariat was right to distance itself from this report, but it must go further and withdraw the report altogether(…) The United States stands with our ally Israel and will continue to oppose biased and anti-Israel actions across the UN system and around the world.

Heeding Haley’s call, the Secretary General of the UN António Guterres distanced himself from the report  saying does not reflect the views of the Secretary‑Genera or the UN and urged the committee to withdraw the already issued report.

The U.S. Ambassador to the United Nations, Nikki Haley, blasted the report in no uncertain terms calling it “biased” and “deeply offensive.” She urged the UN reject the report and stand with Israel against the hatred of the Islamist extremist world.

Pressure by Haley and the Secretary General led the ESCWA to pull the report, causing the ESCWA Executive Secretary/ Jordanian diplomat Rima Khalaf who was one of the report’s authors resign from her executive secretary role.

Just days after the report was pulled the members of the ESCWA (all Arab nations) that commissioned the report were back at it, attempting to force the findings on to the UN Human Rights Council (UNHRC) in order to once again, condemn Israel. The UNHRC sees its role as being a constant critic of Israel.

Earlier this week Great Britain put the UNHRC on notice about its constant unfounded criticism of Israel:

” announcing that it would vote against all future UNHRC resolutions criticizing Israel until the body ends its “disproportion and bias” against the Jewish state.
“Israel is a population of eight million in a world of seven billion,” said a statement from the British government, quoted by The Jewish Chronicle.
“Yet since its foundation, the Human Rights Council has adopted 135 country-specific resolutions; 68 of which against Israel. Justice is blind and impartial. This selective focus on Israel is neither,” added the statement, which pointed out that “Israel is the only country permanently on the Human Rights Council’s agenda.”

Think about that for a moment, Syria is using chemical weapons against their own people, Iraq used it against the Kurds, Putin is murdering his opponents, Cuba, North Korea, China and others arrest and murder political opponents, many of the Arab States execute gays and other “infidels,” etc., etc., and so on–but 50% of the UNHRC’s actions have been directed at the only democracy in the Middle East.

The UNHRC is loaded with human rights violators including countries such as China,Cuba, Egypt, Ethiopia, Saudi Arabia, and Venezuela just to mention a few.

As the ESCWA tried to present the findings of the report labeling Israel as apartheid to the UNHRC, Hillel Neuer of UN Watch was there to greet them. Neuer has spent much of his career at the NGO fighting against the UN’s anti-Israel hatred especially the hatred spewed from the UNHRC. Neuer   delivered a scathing address that left the room in stunned silence. This is a speech that must be heard and shared because it asks the most important question of the world debate on Israel. Namely, ‘Arab world – where are your Jews?’

Silence. Utter silence as the truth of Neuer’s words ring in the ears of those in attendance. Jews across this planet have been hunted, persecuted, and killed. The Arab world used to be filled with Jews, but the Muslim majority has stamped them out.  The UN estimated that between 1948 and 1950 there approximately 711,000 Palestinian Arab refugees, they were not thrown out of the nascent state of Israel, they were urged to leave by the Muslim countries surrounding Israel who refused to allow these refugees to fully settle in their countries.They weren’t allowed to become citizens and they were forced to remain in refugee camps so they can remain as a population of hatred who wanted to destroy the Jewish State.

At the same time there were 850,000 Jewish refugees from Muslim States (some estimates have that number as high as 1,000,000). They didn’t leave on their own, they were thrown out of the countries where their families had lived for 1,500-2,000 years.  While there were more Jewish refugees than Arab refugees, the Jew who were forcibly removed from their homes were largely forgotten because they were allowed to re-settle in Israel and many western nations.

Yet, in the UN those same Muslim nations who have so persecuted the Jews and even “cleansed” them from their nations, seek to shame Israel for defending itself against a Palestinian population bent on her destruction. It’s disgusting. It’s shameful. It’s abhorrent. If the UN was truly a respectable and intellectually honest body, they would stop condemning Israel and start denouncing those Muslim countries that toss out the Jewish families and continue to teach their populations to hate all Jews who live in Israel or anywhere else in the world.  But as Jews have sadly learned ever since the Romans exiled most of them in 135 C.E., to much of the world Jewish blood was and remains a very cheap commodity.

Below is a Transcript of Hillel Neuer’s latest admonition of the UNHRC, and the hypocrisy of its membership:

Mr. President, let me begin by putting the following on the record: Everything we just heard — from the world’s worst abusers of human rights, of women’s rights, of freedom of religion, of the press, of assembly, of speech — is absolutely false; and, indeed, Orwellian.

Today’s report does not consider Israelis to be deserving of human rights — consistent with the approach of this council, where today’s notorious agenda item against Israel completely ignores their human rights.

Over the weekend, President Abbas announced he was giving his highest medal to Rima Khalaf, who resigned from the Economic and Social Commission of Western Asia, a Beirut-based UN agency of 18 Arab states, after Secretary General Guterres rightly instructed her to remove an absurd report which accused Israel of “apartheid.”

Mr. President, why is Mr. Abbas celebrating a report written by the notorious Richard Falk, after his own Palestinian Mission here, tried in 2010, to remove Mr. Falk on the basis that he was “a partisan of Hamas,” as we know from WikiLeaks?

The accusation against Israel is absurd.

Israel’s 1.5 million Arabs, whatever challenges they face, enjoy full rights to vote and to be elected in the Knesset, they work as doctors and lawyers, they serve on the Supreme Court.

Now I’d like to ask the members of that commission, that commissioned that report, the Arab states from which we just heard. Egypt, Iraq, and the others:

Once upon a time, the Middle East was full of Jews.

Syria, you had tens of thousands of Jews. Where are your Jews?

Mr. President, where is the apartheid?

Why is there a U.N. commission on the Middle East that does not include Israel? From the 1960s and the ‘70s they refuse to include Israel. Where is the apartheid, Mr. President?

Mr. President, why are we meeting today on an agenda item singling out only one state, the Jewish state, for targeting.

Where is the apartheid, Mr. President?