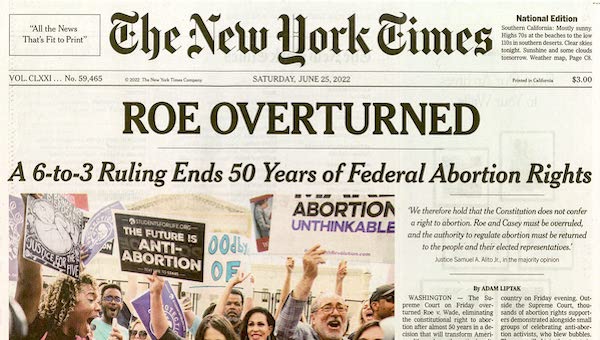 For nearly a half-century, those seeking legislation designed to protect unborn children prayed the Supreme Court would let abortion policy be debated by the states and their voters, not via erroneous federal edicts.

Now that we’re having that debate this summer and fall, which side is succeeding?

Pro-lifers should be discerning about data showing discontent with anti-abortion policies.

Polling shows increased public support for abortion since the court righteously ended Roe v. Wade in late June. Because of this, Democrats believe the issue will motivate their voters, even as abortion limitations have little to no effect on over half our states.

Progressives cheered when a couple hundred thousand Kansans struck down a murky referendum last month that would’ve allowed their state legislators to increase abortion restrictions. But otherwise, there’s been scant evidence of actual sentiment other than polls and analyses by the pro-abortion media.

Knowing midterm elections are seldom positive for the party in power, the White House believes the abortion decision can distract from nearly two years of its endless failed policies. Republicans are out of power, but due to the Supreme Court ruling and certain compromises being promoted by senators, Democrats have tried to convince the public that the GOP is somehow still in charge of Washington.

4\\
The legacy media, which is intensely pro-abortion, has pushed this idea and focused on abortions early in pregnancy or on the infinitesimal cases of rape, incest, or a mother’s health. The sophistic media purposely ignore Democrats’ extremism and that people favor restrictions on the taxpayer-funded killing of nascent life or during the final weeks of pregnancy.

Sen. @maziehirono: Fighting the pro-life movement “is literally a call to arms in our country.” pic.twitter.com/JCtAwMpzE1

While pro-lifers should absolutely attempt to change the focus, it also requires adjustments from two of their teams.

Passionate pro-life groups waited 50 years to discard Roe; as they celebrate the end of this injustice, they also should remember the need for patience and especially persuasion.

Libertarian-style Republicans, who often fancy themselves, pragmatists, presume that they must shrink back and refuse to discuss abortion, or they should forego their party’s long-established platform and become etch-a-sketch candidates just so they can make the issue go away. The latter is self-defeating rhetoric.

Republicans should acknowledge that legal protections for unborn children necessitate building a public consensus in all but the most profound blue states that involves working to prohibit abortions late in a pregnancy, where it’s rarely necessary nor moral.

That’s not an abandonment of end goals; it’s ultimately a step toward zero abortions because it acknowledges most Americans aren’t there yet.

About two decades ago, pro-lifers convinced many of their fellow citizens who disagree with abortion in general to prohibit the inhumane barbarism of partial-birth abortion. This took persuasion and patience and helped to begin the path toward the Dobbs v. Jackson case this summer. It can now lead to restrictions on other methods.

With crucial elections only 50 days away, well-meaning Republicans must have perspective about their challenges.

The end of Roe may cost some congressional races; however, long term, it will enable an expansion of legal protection for unborn children, assuming Republicans take back the U.S. House and prevent Democrats from enacting a “codified,” more radical version of Roe early next year.

Nearly three months after Dobbs, the post-Roe debate is not going perfectly, yet it’s only the first inning. We should remember the incrementalist approach got us to today; now, we need patience and persuasion.