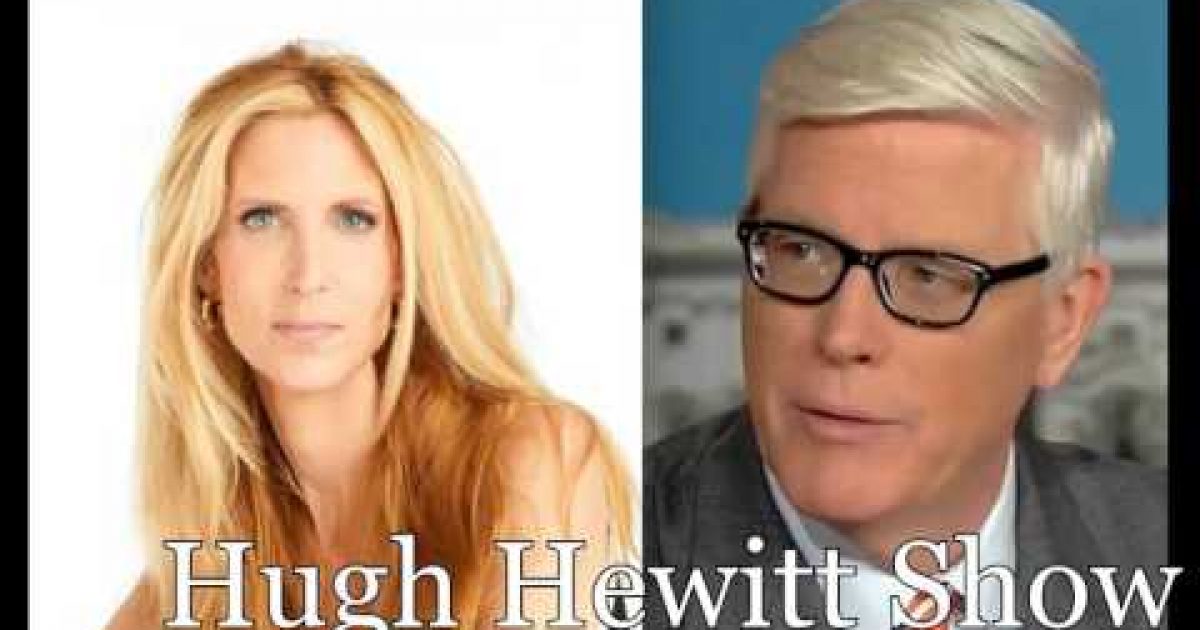 At time Ann Coulter drives both liberals and conservatives crazy it’s not because she is a bright woman who can exploit the English language to create a picture as well, or better than any conservative writer,but because she sometimes uses her gift to say the most outlandish things.  What people don’t understand is that those over-the-line comments are what we call in NY her “schtick,” meant to bring her attention and headlines.  Yes America, it’s good old fashioned branding.

Take her interview with Hugh Hewitt on his radio show Wednesday evening.  Having caused a battle royale on twitter because of her Ted Cruz birtherism and comments about Nikki Haley after post-SOTU address (she said Haley should be deported), Coulter faced tough questioning from Hewitt and without backing down explained the rationale for why she said what she said.

Long before Donald Trump became a candidate for president Ann Coulter’s number one issue has been immigration,  she written about it and I have personally seen her deliver passionate speeches about it at CPAC. IMHO it is her strong beliefs about immigration driving her outlandish statements about Cruz and Haley.

Ms. Coulter doesn’t exactly say the above to Hewitt, but you can pick up the implication from their discussion.  Also fascinating in the transcript and video below was the discussion between the two attorneys (both Coulter and Hewitt are lawyers) about what the Constitution means by  a “natural born citizen.”

Read the transcript of the interview and watch the video below:

Hewitt: America’s most controversial tweetster, and that would not be hipster, but tweetster is Ann Coulter, author most recently of Adios, America. She joins me now. Welcome back, Ann, you did it again. You set Twitter on fire. You have to stop that. We don’t have enough insurance.

Coulter: (laughing) I know, and it was after a long rest over Christmas and New Year’s, but I came back with a bang.

Coulter: No, that was a joke…

Coulter: …because I was angry at her response to the, I mean, if we could, I’d be open to it, don’t get me wrong. But Hugh, this is really unbelievable. I mean, people always say oh, there’s no Washington establishment. I used to say that when they said it about Mitt Romney, because he wasn’t Washington establishment. He had the toughest position on immigration until Donald Trump rose like a Phoenix. But look at this. The Democratic president gives a speech last night, and the Republicans respond, and both speeches attack Donald Trump. And Nikki Haley going on and on about immigrants, and we need more immigrants, and anyone who’s willing to work should be allowed to emigrate here. Are they not seeing what’s happening with Donald Trump?

Hewitt: Ann, I feel like I’m talking to the arsonist who burned down the building and then is upset with the ashes, because I don’t think, here’s what happened with me. I was in the virtual soundproof booth listening to Nikki Haley for ABC. George came to me right out of the speech, and I said what a great speech. She brought up the noblest moment in recent American history when the victims forgave the killer, and she can be Cruz/Haley, Trump/Haley, Rubio/Haley. She can run with anyone. I heard no anti-Trump stuff at all, and you went on Twitter.

Coulter: She has admitted it was.

Hewitt: Well, I know she did after the fact.

Coulter: She was on NBC this morning saying it was directed at Trump.

Hewitt: I, after Matt Lauer asked her a direct question, but I think Ann Coulter started all this. I think this is on you, Ann.

Coulter: No, that’s crazy. I’m not the only one who reacted that way. When she’s saying, specifically talking about Muslim immigration, and saying well, we just need to vet them, but we can’t look at religion, well, how are you going to vet them?

Coulter: As I also tweeted after saying we should deport her…

Coulter: I run through, you know, under her vetting system, how do you keep out the San Bernardino killing? How do you…

Hewitt: I’m just talking about the speech last night. I think it was…

Coulter: That is the speech last night I’m talking about, Hugh.

Hewitt: She did not talk about the Muslim vetting, and being in…

Coulter: Yes, she did.

Hewitt: She said, she talked about how we have to be open to people coming into the country.

Coulter: No, she did. You know, I don’t know what, were you at the State of the Union Address? Is that what you’re saying?

Hewitt: No, I was in the little box in a remote studio. I listened to every word of what she said.

Coulter: Because I must tell you, my friend, Mickey Kaus, told me he was at the Gore-Bush debate where Gore did all the sighing, and he watched it from the press room, and he said you couldn’t hear any of the sighing. Now that’s a more subtle thing, and he talked to his mother afterwards, a big, big, liberal, by the way, who said oh, that Gore’s sighing was annoying. You know, everyone was ticked off at that. I think wherever you were watching it, you missed it, because she expressly said we just need good vetting for Muslims. She expressly said anyone who was willing…

Hewitt: Okay, I missed it.

Coulter: …to work hard should be allowed to come here. Hugh, anyone who is willing to work here and coming here, that’s, you know, 2 trillion people.

Hewitt: And so she’s in favor of…

Coulter: The San Bernardino shooter was a legal immigrant.

Hewitt: And the President wants to, we’re cross-talking now. But let me go back to the key thing. I want to talk about Ted Cruz.

Hewitt: I know, I know, but I want to go back to the key thing, which is the Cruz eligibility. I had Senator Cruz on yesterday. What does Ann Coulter define a natural born citizen as, and on what basis do you make the argument?

Coulter: I’m so glad you asked. I just, my column just went up at AnnCoulter.com. You’ll have to read it. You’ll feel like you’re back in, you know, Texas, Chicago or Arizona when we briefly disputed this on stage. No, as you know, I’ve always thought he wasn’t natural born. I was briefly fooled by lawyers who assured me that they had looked at it, and I usually trust them.

Hewitt: Because you tweeted to the opposite effect at one point.

Coulter: Correcting what I had said the night before, and then I looked up the law and found out wow, I was right to begin with, because I mean, just as I found out when I wrote High Crimes And Misdemeanors, I’m sorry, Constitutional Law isn’t a question of what I want. I’m not Ruth Bader Ginsberg. There, the term natural born has a long, legal pedigree going back to 1608, reported by Coke in Calvin’s Case, and that’s a long, complicated case. But it has been adopted by our Supreme Court, the common law, the Blackstone commentaries. And what is very clear that yeah, Cruz was a citizen when he was born, but he was not a natural born citizen, because anyone born even to two American citizens abroad becomes a citizen by the process of naturalization, i.e., Congress has to write a law.

Coulter: If Congress has to write a law to make you a citizen, you’re not natural born under the Constitution. And I studied the case law…

Coulter: …and I cite the common law.

Coulter: …and it’s all laid out in my column.

Coulter: Okay, but as I say in my column, that isn’t, that’s not…

Hewitt: There is no Supreme Court case on point.

Hewitt: There is no Supreme Court case on point, and so Laurence Tribe’s throwing gasoline on the fire is correct, and I’ll talk about it with Eastman. But do you realize that you have missed the best argument, Ann?

Coulter: I disagree that there is no Supreme Court case on point.

Hewitt: No, I’m going to give you a new argument.

Hewitt: I have a better argument for you. Wait, I have a better argument for you. Listen to this. In 1963, Jack Kennedy asked for, and the Congress gave him, a law making Winston Churchill an honorary American citizen, even though Winston Churchill had an American mother. Ergo, why was that necessary? I asked Ted Cruz that question yesterday. Had you thought of that, Ann?

Coulter: I don’t, I mean, I’ll take any support I get from Hugh Hewitt, but I actually don’t think that is a good argument. Congress can’t by law change what the Constitution means, or as I suggest in my column, how about Congress pass a resolution defining the New York Times as not speech?

Hewitt: Congress can, in fact, because they are giving Constitutional…

Hewitt: No, I agree. Constitutional…

Coulter: And there is a history. There’s 400 years of history.

Hewitt: No, there’s not. No, they are given absolute authority, the plenary authority over the natural law.

Coulter: Hugh Hewitt listeners, you have to read my column.

Hewitt: Well, we’ll tell them, but naturalization law is vested in the Congress, expressly in Article I.

Coulter: No, he is a citizen. He’s not natural born. You cannot be natural born unless you are the child of an ambassador, or if we were in a monarchy, but we’re not, a child of the king himself.

Coulter: Ambassadors, I would assume, this is a case that hasn’t been ruled on, that the children of military, somebody serving in the military is natural born. But other than that, not born on U.S. soil, you’re not natural born.

Hewitt: Ann, and I respect that you hold this position forcefully, but would you acknowledge that you are a minority of about three?

Coulter: I was a minority of less than that when I said Bill Clinton was guilty of high crimes and misdemeanors and wrote a book about it. The law is the law, and I don’t care how many people agree with me.

Hewitt: I know, but I just want to…

Coulter: And I think when read my column, you’ll see the law is the law, and it’s very clear.

Coulter: But even though there are cases that are unclear, but Ted Cruz’ case isn’t close to unclear.

Hewitt: But yes, it is. It isn’t close to unclear. He’s absolutely a citizen.

Coulter: That’s now how we decide what a Constitutional term means.

Hewitt: All right, Ann Coulter, it’s always a pleasure, talk to you soon.