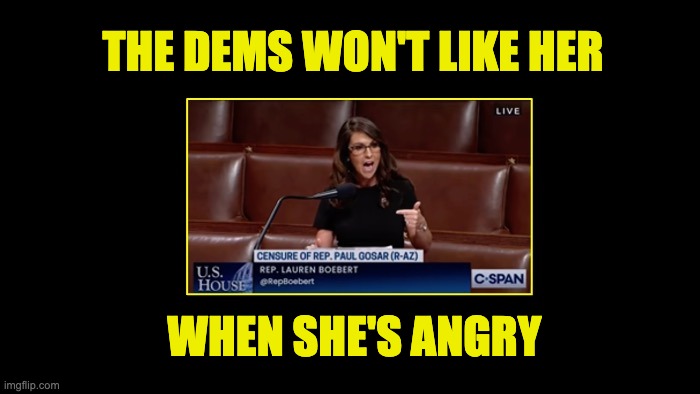 I have been a big fan of Lauren Boebert (R-CO) from the moment she went to a Beto O’ Rourke rally in 2019 to tell him, “I was one of the gun-owning Americans who heard you speak regarding your ‘Hell yes, I’m going to take your AR-15s and AK-47s.’ Well, I’m here to say, ‘Hell no, you’re not. And now that she’s won a congressional election, she continues to impress. Hell hath no fury like Lauren Boebert pissed off, and on the House floor Wednesday, the Democrats made her very angry. angry rep. Lauren Boebert

It all started with an idiotic meme mocking NY Democrat Rep. Alexandria Ocasio-Cortez. Someone in Rep. Paul Gosar’s team put AOC’s face on an anime scene. The scene depicted AOC as a monster being attacked and destroyed by Rep. Gosar.

All of a sudden the party that ignored Maxine Waters telling people to harass anyone who worked for the Trump Administration, and didn’t censor Ilhan Omar for promoting Jew-hatred was upset at what they believe is a GOP Rep inciting violence.

The anime led the Pelosi-controlled Democratic Caucus to attempt to censor Gosar. This is the same caucus that ignores an incident when one of their members misbehave. Wrongdoing by a Democrat usually faces no punishment.

A worthless debate about the punishment ensued, resulting in the pre-planned result of the Democrats closing ranks and censoring the Republicans.

The House voted for a resolution on Wednesday that both censures Republican Rep. Paul Gosar [AZ] and removes him from his committee assignments after the Arizona congressman tweeted an edited Japanese anime cartoon last week showing him stabbing President Joe Biden and killing Rep. Alexandria Ocasio-Cortez, D-N.Y., before he deleted it.

House Speaker Nancy Pelosi was the first to kick off debate on Gosar’s actions which, she said, “demand a response.”

The response to Pelosi should have been Let’s Go, Nancy!

They rarely attack their own when they act irresponsibly.  For example, when Ilhan Omar (D-MN) spewed Antisemitism, the Democratic Party leadership didn’t muster the courage to stand up to Omar’s hatred. Instead, they passed a generic resolution that basically said that being mean to others is a bad thing. That’s something people learned as children watching Sesame Street. Omar is on the foreign relations committee and influences America’s relations with the Jewish State of Israel. They didn’t remove any of her committee assignments.

This same caucus denied Trump due process in their impeachment circuses, secretly subpoenaed (and released) private information, including that of Republican Congressmen and journalists. That same group created a January 6th commission that refused to accept any Republicans who have not already pronounced Trump guilty of inciting an ‘insurrection’ before opening the investigation.

Rep. Lauren Boebert, who had previously been thrown under the Democrat’s bus, had no intention of taking this lying down. Since the House Chamber used the Paul Gosar incident as a forum for political attacks against Republicans, Rep Boebert had a few things to say about the Democratic Party members.

Her words were stinging and included allegations against Democratic House members that were ignored by the liberal leadership. Now, thanks to her speech, these allegations became part of the Congressional Record.

After ridiculing the practice of digging through social media for excuses to be offended and stripping political rivals of their committees, she accepted those as the terms of engagement. Boebert attacked the Democrats using their methodology.

“This is a dumb waste of the House’s time. But since the Speaker has designated the floor to discuss members’ inappropriate actions — shall we? The Jihad Squad member from Minnesota has paid her husband, and not her brother-husband, the other one — over a million dollars in campaign funds. This member is allowed on the Foreign Affairs Committee while praising terrorists. A Democrat chairwoman incited further violence in the streets outside of a courthouse. And then, the cherry on top, my colleague, and three-month presidential candidate, from California, who is on the Intelligence Committee, slept with Fang Fang, a Chinese spy. Let me say that again, a Member of Congress who receives classified briefings was sleeping with the enemy, this is unacceptable and this would never be —

She was gaveled down as time expired. But as some pointed out she hardly scratched the surface of the material she could have thrown in their face.

If Democrats continue to behave like petty socialist tyrants, we need to stand up like Boebert is doing and expose their tyrannical hypocrisy. And if that means the GOP needs to do some angry, take no prisoners oration,  like she did here, they should go at it. Unlike many conservatives in the House, Lauren Boebert has a backbone.

When it was all done, Rep Omar tweeted her objections to Lauren Boebert’s words. I couldn’t help myself.

your dad raised you right? He hated Jews also?