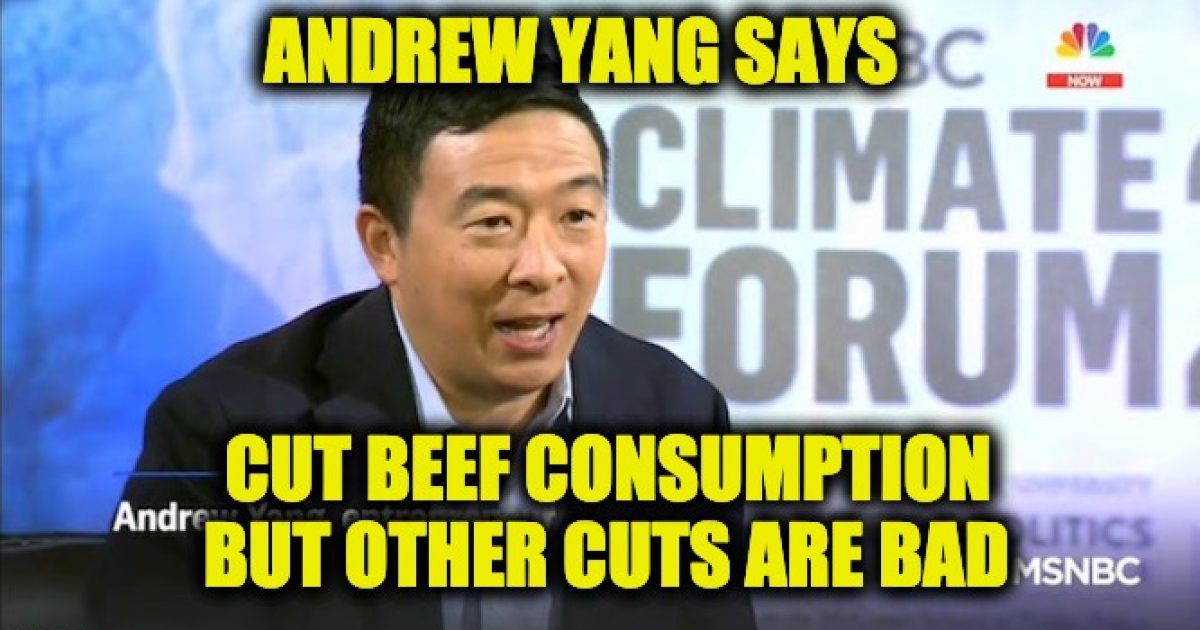 Well, It looks like Andrew Yang is against some cuts but wants to encourage others.  The Democratic Presidential candidate who aligns himself with those who oppose circumcision and intends to include the position into public policy, announced that he intends to cut beef consumption.

While participating in a town hall event on MSNBC Thursday, Democrat White House hopeful Andrew Yang said he would cut beef consumption by making it more expensive. Why? One might ask. Simple — to stop so-called “climate change.” That’s right — Yang thinks he can save the planet by making the meat too expensive for Americans to buy–yep he wants to stop cow farts.

Realistically, the only way to curb expansion and reduce the environmental impact of the cattle industry is to reduce demand, what policy adjustments would you make to reduce demand,” one questioner asked.

“Cattle is very energy-consuming and energy-expensive,” Yang said. “And if you project forward on what we would need to do to reduce emissions, you would want to modify Americans’ diets over time.”

He admitted it would be difficult for the government to dictate diets (well except for the Obamacare bill), so he suggested cattle producers “internalize the cost of emissions” to make meat more expensive.

“So then, what that would naturally do, and some people are going to hate this, but it would probably make those products more expensive,” he explained. “And that is appropriate because there is a cost to producing food in that way. And so if you were to make it more expensive, then you would end up changing consumption patterns.”

Yang isn’t the only Democrat to target meat, as we and others reported.  Cory Booker, for example, said the planet simply can’t sustain people eating meat.  Kamala Harris has also talked about incentives to reduce meat consumption:

Yang, by the way, has also said he supports a “buyback” of cars.  Not only does he want us without transportation, but he also wants to starve us.  This, by the way, is the modern Democratic party.

If any claim proves that the global warming hoax has gone too far, it’s this one. A few years ago scientists in Argentina even strapped red tanks on the backs of bovines, to collect their stomach gasses Thankfully it was in Argentina, not America. 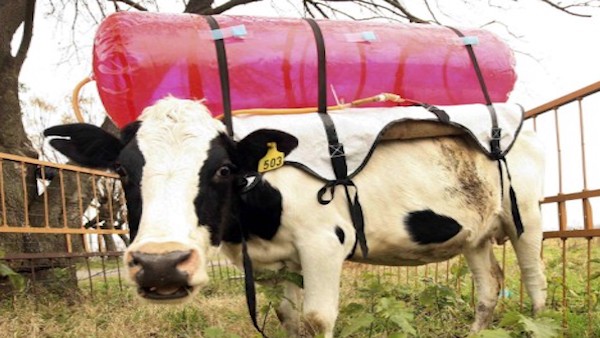 Can you imagine a Democratic Party bureaucracy forming a Monty Python-like “ Department of Bovine Flatulence?” I wouldn’t put it past them.

Now I have a compromise solution that may please Andrew Yang, and keep beef eaters like myself happy. Leave meat prices alone, but ban the circumcision of bovines.  It will make so many happy, especially the Rabbis who find out they have to perform a bovine bris.