Using Her Logic She Should Have Never Been Born 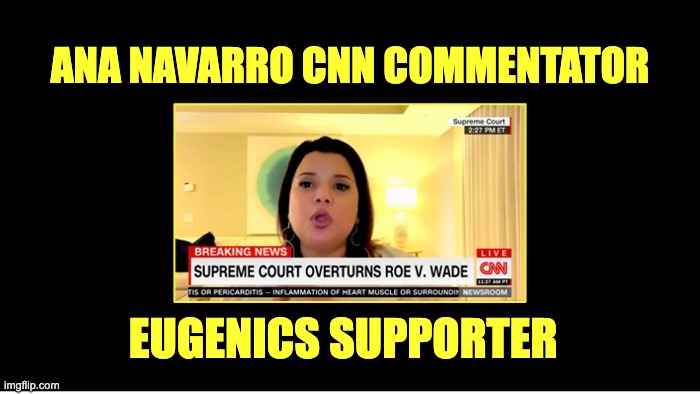 Ana Navarro, a pseudo “GOP strategist” and a CNN commentator shocked the news channel’s audiences on Friday when she said that she supports abortion to kill off autistic and mentally challenged people like her own family. In other words, she supports eugenics.

Navarro’s words sounded like those of Margaret Sanger, the founder of Planned Parenthood. Sanger created the organization to practice eugenics–a sick belief that the human “gene pool” would be improved through selective breeding and sterilization. In Sanger’s case, improving the gene pool meant keeping African-Americans, morons, those with a family background with a history of illnesses, mental disease (like Ana?)  serious physical defects.[ and other undesirables from reproducing.

Her interview began with the bogus talking point that she is “struck by the contrast” that the SCOTUS passed down a ruling saying that our Second Amendment rights are a federal issue and shall not be infringed, but our “abortion rights” has now been sent back and is a state’s rights issue.

Ana’s CNN interview claimed abortion is good and wished her own relatives had been aborted.

“And because I have a family with a lot of special needs kids. I have a brother who’s 57, and has the mental and the motor skills of a one-year-old. And I know what that means financially, emotionally, physically, for a family, and I know not all families can do it,

And I have a step-granddaughter who was born with Downs syndrome, and you know what? It is very difficult in Florida to get services. It is not as easy as it sounds on paper and I’ve got another, another step-grandson who is very autistic, who has autism,”

IMHO anyone who supports eugenics, such as Sanger, the KKK, Hitler, Hitler supporters Josef Mengele and Charles Lindbergh, along with Navarro, are mentally challenged. Thus, according to Navarro’s rules, she should never have been born.

A video of the entire interview is available on Mediaite.

Some of this post were first seen at iPatroit.

FBI Raid of Mar-a-Lago Compared to Gestapo
The Floridian