America Was Sliding Toward Socialism For Over A Century, Will Socialism Restart After Trump? 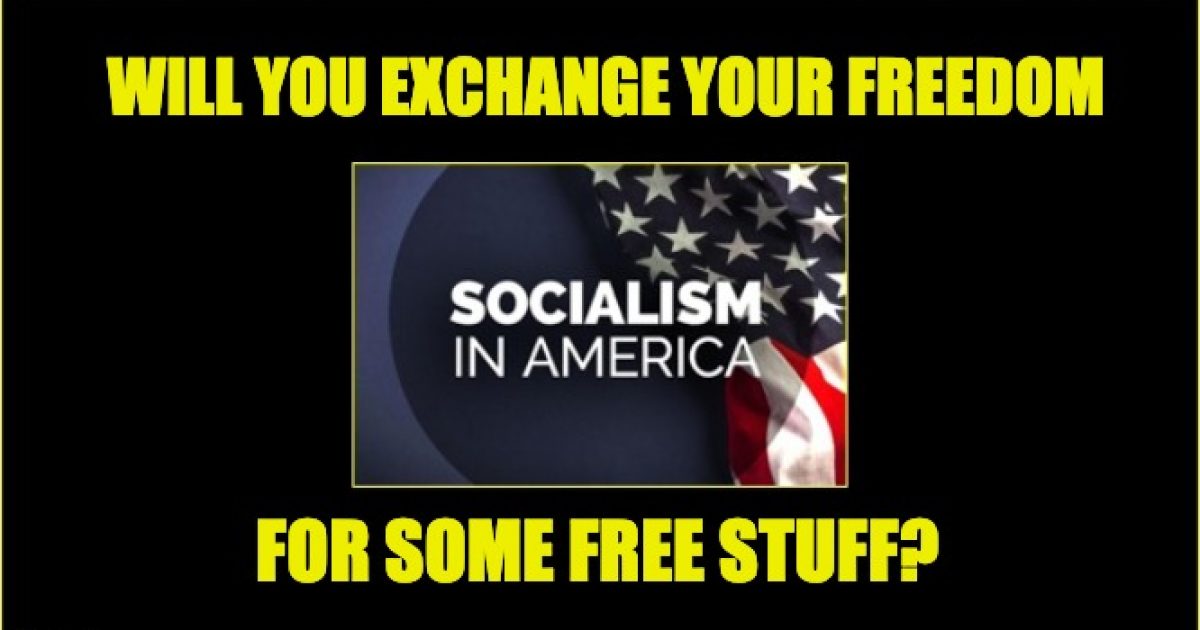 President Trump has repeatedly vowed that “America will never be a socialist country,” But America’s been sliding toward Socialism for over a century. Trump has stopped the slide toward socialism, but he won’t be president forever.

Bernie Sanders claims his 2016 socialist declarations were the springboard for the many 2020 Democratic hopefuls voicing their own anti-freedom. pro-Socialist promises. But the move to take away our individual freedoms and move towards socialism/ progressive started a century before Bernie. But for most of that century, the socialist movement (sometimes called progressivism) was surreptitiously trying to take over America.

In 1887 long before Woodrow Wilson became President, he wrote an essay trying to fool the American public about socialism. One it’s most famous passages was:

That isn’t close to being true.

A critical tenet of Socialism is collectivism. But the version of democracy practiced in the American republic insists that (with some exceptions) the rights of the individual are superior to the rights of the collective or the government.

Today, Wilson’s political descendants present the false concept that socialism is the best way of attaining equality. Which is ironic because Wilson, who segregated the military, was arguably the most bigoted person to ever sit in the White House.  He hated immigrants (notably from Italy and Poland) and hated African-Americans.

During his 1912 Presidential campaign, Wilson sounded a progressive/socialist theme that is still used by Democrats today.  He said,  “The Constitution was founded on the law of gravitation. The trouble with the theory is that government is not a machine, but a living thing.” A “living” constitution is a favorite concept of Barack Obama and is popular with the Democratic Party today.

Sadly, Progressivism/Socialism’s believers listened to honest Abe. John Dewey, who was a progressive leader, was crowned “the father of American Education,”  some even call him the best educator who ever lived.

During the late 19th and first half of the 20th-century, Dewey pushed to make school a tool for leftist-progressive social engineering.  Dewey advocated conveyor belt education—training a conditioned response in students to have them better conform to the “one, ultimate, ethical ideal of humanity, thus making them more equipped for their future workforce.” Many believers of the failed common core system used the words of Dewey as evidence it should be implemented. Sadly Dewey’s “ethical ideal of humanity” was democratic Socialism:

In the book Crimes of the Educators, Samuel Blumenfeld and Alex Newman explained:

Dewey’s plan was to impose on America a form of cultural genocide never before imposed on any nation. The way to do it was to disparage high literacy and to teach children to read by a method that would prevent them from achieving the kind of high personal literacy needed to develop their independent intelligence.”

And it worked, for decades has turned America’s youth away from individualism and independent thinking into zombies. The only way to be successful in school was (and is) to adopt the teacher’s socialist-type philosophy, those teachings are echoed in today’s progressive/socialist street protests under the banners of “resist,” “white privilege” and more. Even the socialist doctrine of international redistribution of income, cloaked as the climate change movement, began as environmentalism—which was shoved down the throats of our youth starting in the 1980s.

Aside from Dewey and academia, political players have and are playing a to convince American’s about progressivism/socialism. A 1970 New York magazine piece by economist, an adviser to JFK [and Bubba Clinton Presidental Medal of Freedom honoree]  John Kenneth Galbraith wrote, “Richard Nixon and the Great Socialist Revival.” At the time Nixon was a very popular president and Galbraith (who spent a lifetime working tor advance progressivism and what he called social justice) was implying that if Nixon liked socialist programs, they couldn’t be too bad.

A year later Trohan wrote that it might be too late as the only difference between the two parties was that the GOP slid toward socialism a bit slower:

After the socialist-type programs of FDR, America reacted with the conservative Eisenhower. While communism was an external threat through the 1960s, it was sold as a military threat that ignored the danger of internal moves toward the progressive/socialist loss of individual rights.

Galbraith and Trohan were correct in saying that Nixon was not a conservative. His creation of the Office of Management and Budget or the Environmental Protection Agency are just two examples of his belief that centralized big government took precedence over individual liberty. Even the Watergate scandal was an example of the belief that government took precedence over individual liberty and thinking.

The socialist slide continued with Jimmy Carter before the public put a stop to elect Ronald Reagan. Reagan’s surprising election, as well as the popularity of his presidency, was based on his belief in the power and wisdom of the individual American vs. the collectivization of government. As some of his most famous quotes reflect that philosophy. Such as “In this present crisis, government is not the solution to our problem; government is the problem,” or the oft-quoted nine most dangerous words in the American language. “I’m from the government, and I’m here to help.” Reagan’s signature tax cut program took away wealth from the collective government and restored it to the individual voters.

Despite that Reagan’s drive to restore American’s belief in the individual and stop the slide towards socialism turned around a horrible economy,  it was met with fake claims racism and warmongering from the press (it was all MSM back then) and the democrats.

As the election of Ronald Reagan, Donald Trump’s 2016 victory, was a voter reaction to the move away from America’s individualism towards socialism’s emphasis on the collective. The meaning of his campaign themes of “Make America Great Again,” and “America First” make Americans powerful again. His redesign of the economy—deregulation and tax reduction were each designed to empower the individual.

But as they did with Reagan, the supporters of progressivism/socialism are attacking Trump with false charges of racism/white supremacy, and warmongering. As they learned a long time ago, that best way to fight freedom is to call their opponents names and the claim the goals of their programs is equality.  But America’s version of equality is freedom of opportunity, their version is the Socialist version freedom of result.

In my opinion, Trump’s 2020 emphasis on fighting against socialism and for individual freedoms will lead to his reelection. But will America ever become a socialist country? It depends on who comes after. Will future presidents continue the century-long slide toward socialism? Who knows? The socialist practitioners never really explain what they are selling. They call it progressivism or liberalism as they push policies that take away our individual freedoms—our healthcare decisions, attack our faith, and push programs that will take away our freedoms. The green energy plan restricts what we can eat (cows), how we travel (planes), and even how we keep ourselves warm (fossil fuels).

I believe the president believes that “America will never be a socialist country.” And I also think that it will never happen as long as he is POTUS. But he will not be president forever. And many GOP presidents, even ones who claimed to fight against the progressive/socialist movement, have accepted the march away from individual liberty.  In the end, it is up to the voters. Do they become complacent and forget how Presidents such as Reagan and Trump had to stop the slide?  If we forget, perhaps it will be too late because our freedoms will be too far gone. As Lincoln said: