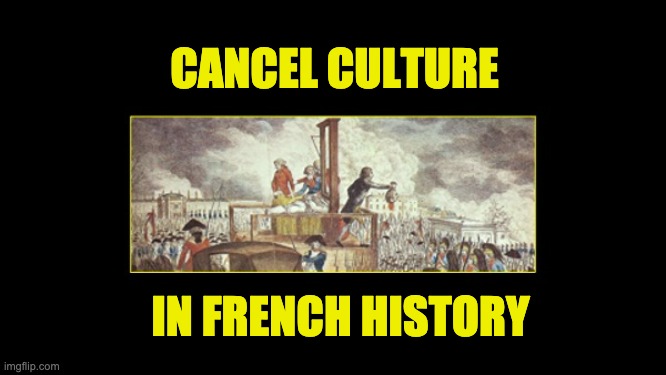 Prominent politicians, intellectuals, and academics in France complain that the American cancel culture is threatening the French identity. In blaming the United States for cancel culture they are ignoring their own history.

The French have had a first-hand experience with cancel culture gone wild.  The Reign of Terror after the revolution was an example of cancel culture in the extreme. After the French Revolution, the paranoid hysteria resulted in the murder or execution of over 40,000 in roughly ten months.  Compare that to another example of European cancel culture, the Spanish Inquisition. The inquisition’s body count of about 2,000 occurred over two centuries—and the Inquisition came as a surprise (nobody expects the Spanish Inquisition.)

France tilts to the left pretty hard as are the Americans pushing cancel culture but France’s government and thought leaders are telling those American leftists to take it down a notch.

In a speech in October on the ‘Fight against Separatism’, Macron warned against leaving ‘the intellectual debate to others’ as he cautioned of the ‘certain social science theories entirely imported from the United States’.

His education minister Jean-Michel Blanquer also warned in October that there is a ‘battle to wage against an intellectual matrix from American universities’.

Now that is unusual.  Instead of surrendering, as is the French tradition, France’s government is fighting back against cancel culture. The right-wing side of French politics is also blaming America for their cancel culture.

Earlier this week, Paris Opera’s new chief Alexander Neef released a 66-page report on diversity at the firm in which he vowed to diversify staff and to ban blackface. The report came after five black members of the ballet company called for greater diversity in the firm in an open letter last summer.

Le Monde said that Neef had soaked up Americal culture for 10 years while he worked in Toronto, Canada.

But is the Opera’s stance really a result of  American culture, or is someone demanding that Mr. Neef push his report.  It is no secret that the Paris Opera house is run by a phantom who is really just a disfigured man who lives in the tunnels under the building. When the opera house’s management doesn’t listen to that phantom of the opera, he has been known to send a chandelier down on the audience.

Per the NY Times, The publication this month of a book critical of racial studies by two veteran social scientists, Stéphane Beaud and Gérard Noiriel, fueled criticism from younger scholars — and has received extensive news coverage. Mr. Noiriel has said that race had become a “bulldozer’’ crushing other subjects, adding, in an email, that its academic research in France was questionable because race is not recognized by the government and merely “subjective data.’’

That lack of recognition of race by the French government not only points out a large difference between our two nations’ cultures, but it exposes the actual reason the French are speaking out against cancel culture.

America is described as a melting pot, but we’re not—France is.  The U.S. culture is more of a gumbo– a thick soup where the culture of each race and/or ethnicity maintains much of their form while contributing to the whole. That’s why you can hear Spanish words like “adios” or “amigo,” being used in states like Vermont or Kentucky that have almost no Hispanic population. Or Yiddish words like  “bupkis” or “clutz” being spoken in states like Idaho or Alaska with almost no Jewish people.

France, on the other hand, is a melting pot. No matter their background, French citizens are all expected to melt into French culture’s “soup,” creating one uniform culture. French politicians and academics are protesting the cancel culture in the U.S. because it identifies people’s cultures as being different from the monolithic whole of French culture.

Here in the U.S., the “canceling” of people, brands because of viewpoints considered offensive by some is considered by others contra to the ideals of free speech and belief outlined in the constitution. Sadly as leftists expand their foothold in our American government, the Constitution is ignored while acceptance of cancel culture grows.

Maybe one day, instead of blaming America for everything, the French government will realize that if it wasn’t for the United States the Eiffel Tower would be a German Schnitzel stand.