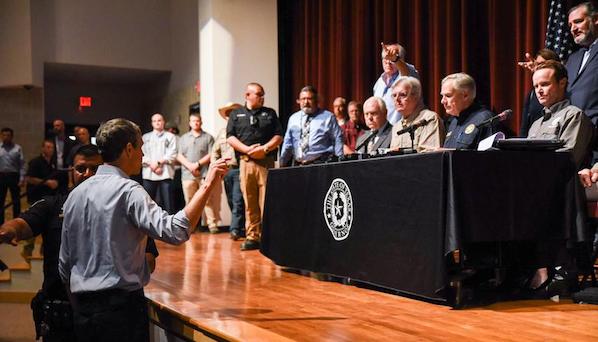 On Monday, a crazy man killed 19 young children and two adults at the Robb Elementary School in Uvalde, Texas.

On Tuesday people spent their time praying for God to give extra wisdom to the doctors treating the wounded, including the shooter’s grandmother who he shot before going to the school. We prayed to God to comfort the bereaved family and friends of the 21 innocents slaughtered by one sick individual.

The shootings were still fresh. The dead weren’t buried, but some inconsiderate jerks believed that it was the perfect time to exploit the massacre and score political points.

Below are three examples of the many heartless people who turn a massacre into a political event. The first two come from Hollywood. The third is a Texas politician who turned it into a campaign stop.

Rob Reiner was called the Meathead in the show All in the Family. An accurate description for someone who turns everything into politics and doesn’t have a tenth of the talent of his late father, Carl Reiner. He tweeted:

The blood of every child that dies of gun violence in this country is on the hands of the Republican Party.

The left-leaning Goldberg ripped the GOP after playing clips of remarks from two prominent Democrats, President Biden and Sen. Chris Murphy of Connecticut. They demanded that Republicans support the passage of enhanced gun control measures following the mass shooting.

“What are we doing? Why are we always at square one with this? And I swear to God, if I see another Republican senator talk about their heart being broken, I’m gonna go punch somebody,” Goldberg said.

Disgusted by the fact that she turned a horrible tragedy into a political opportunity, I answered Ms.Goldberg on Twitter:

@WhoopiGoldberg I am a Jewish Republican who offered prayers following the shooting at a school in Uvalde –Do you want to punch me? Dm me and I will give you my address. I can't do it on Saturday because I am a REAL Jew. I didn't just take a Jewish stage name Ms. Johnson

Even worse than Whoopi and the Meathead was the political action by Beto O’Rourke, the Democratic candidate for Texas governor.

The present Governor and Republican candidate for reelection Greg Abbott was having a press conference to provide Texans the latest information about the shooting and to express his condolences.

When Abbot was done with the first part of his statement, O’Rourke, who crashed the press conference, charged toward the stage, interrupting the Governor and trying to turn the conference into a campaign stop.

“You are doing nothing,” O’Rourke screamed  “You are offering up nothing. You said this was not predictable. This was totally predictable when you choose not to do anything.”

O’Rourke was confronted by Uvalde Mayor Don McLaughlin, who yelled back;

“I can’t believe that you’re a sick son of a bitch that would come to a deal like this to make a political issue.”

At the same time, people in the audience, including the parents of some of the dead children, started screaming at Beto to “go home” Eventually, he was led out by the Police.

Watch the video of the Beto incident below:

Monday’s slaughter was a horrible tragedy that had most of the country mourning. Whether one is pro or anti-gun, it was too soon to turn the conversation away from the shock and horror. The American people needed more than a half-day to mourn   Sadly some inconsiderate jerks exploited the tragedy to score their personal political points.