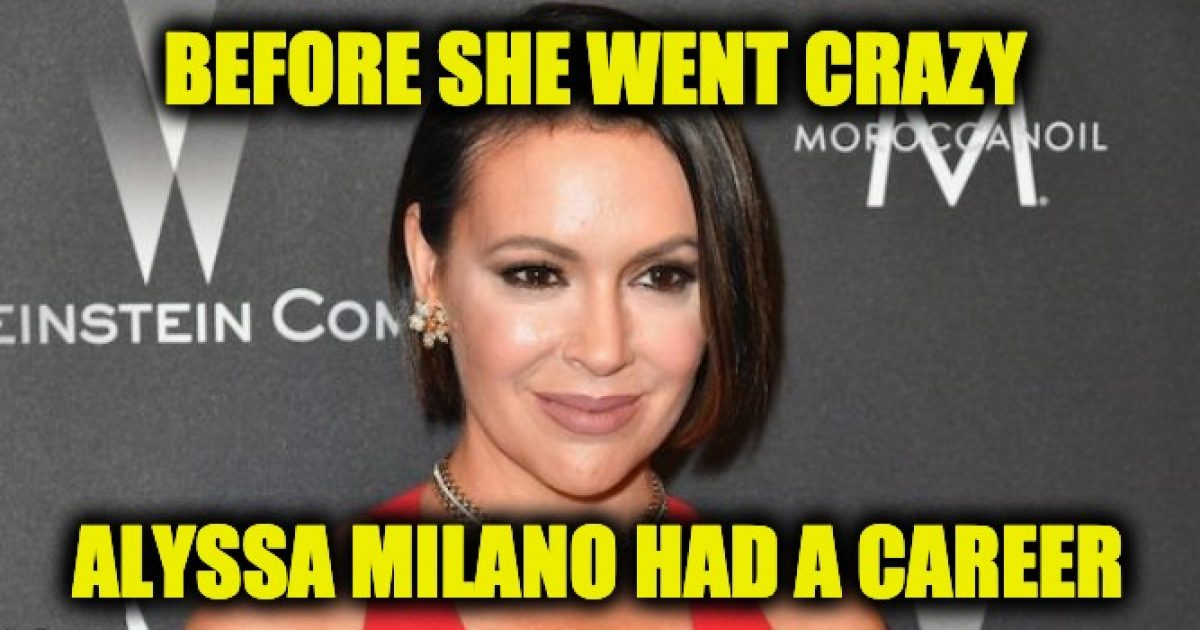 Crazy Alyssa Milano called for a “sex strike” on Twitter Friday night.  She saw the strike as a protest of various recent legal curbs on abortion passed by several states moves she views as attacks on “our reproductive rights.” What she didn’t foresee is that feminists saw her idea as suggesting that women are simply providers and men are consumers of sex. Conservatives applauded her idea because if liberal women gave up sex, there would be fewer abortions.

Alyssa Milano tweeted: Our reproductive rights are being erased. Until women have legal control over our own bodies we just cannot risk pregnancy. JOIN ME by not having sex until we get bodily autonomy back. I’m calling for a #SexStrike. Pass it on.

Our reproductive rights are being erased.

Until women have legal control over our own bodies we just cannot risk pregnancy.

JOIN ME by not having sex until we get bodily autonomy back.

The gates of Twitter opened up with commenters explaining how stupid her sex strike was- especially feminist and conservative commenters:

Hilarious. This is the first time in my entire life that I have seen any “Fake Feminist” take full responsibility for there own body and choices. This is a good start for their “ just say no” campaign.

Did Alyssa know that women are more than sex objects? Or that women have sexual pleasure also? It was in all the newspapers.

Please stop feeding the narrative that women are providers and men are consumers of sex. Bribing men for equal rights with access to our bodies is not how feminism works.

This exactly. 1. Men are not the only ones who enjoy sex. 2. “Sex strikes” reinforce the idea that our only value as women is our ability to provide gratification to men.

A sex strike is not going to be effective. Feminism is about women having the same rights and opportunities as men. Women don’t need to provide men with sex. Men don’t own our bodies. Women control their own bodies and can do whatever they want with it.

You are promulgating the sexist stereotype that men seek sex while women offer it as a bargaining ploy. Had you taken my course in Islamic Intersectional Feminism, you would know that transwomen of color such as myself reject the idea of sex with men. #SoloSexForPeace

Perhaps Milano tweets stupid stuff because she has nothing else to do.

I was looking on her page about career updates and there wasn’t anything on said page. #washedup

Republican men don’t want to be with liberal women who are all willy-nilly with their bodies anyway. All the ones I know are either happily married or dating women who would never kill their own offspring. So ??

Wait this is such a good idea. Don’t want to get pregnant… don’t have sex. It’s almost like it was……. designed that way?

Yes please stop having sex, you have the support of every Republican in the country. pic.twitter.com/vl7H4uHg9Q

If liberal ladies stopped having sex there would be no more Abortions. Thanks @Alyssa_Milano for standing up for #ProLife values ?? More people should be this brave & Save sex for marriage then have a family. God bless. #AbortionIsNotHealthcare #AbortionIsMurder #MAGA

I’m totally with you, @Alyssa_Milano, on not having sex. But the issue isn’t “reproductive rights.” The issue is reproductive responsibilities & fidelity. No one should have sex until they’re ready to embrace the privilege & responsibility of lifelong commitment & raising a child

It’s doubly funny to me because conservative women would never listen to her, so this would mostly end up affecting liberal men, who already agree with her.

Another reason why it’s good to be conservative.

You are finally making sense! Lib women should never have sex again! That’s the perfect way to end this madness! No more Libs being reproduced….not that many get to be born anyway ??

No sex = less unplanned pregnancy = less revenue for Planned Parenthood. This is a great idea! Thanks Alyssa! #ChooseLife pic.twitter.com/zIspLn99Vq