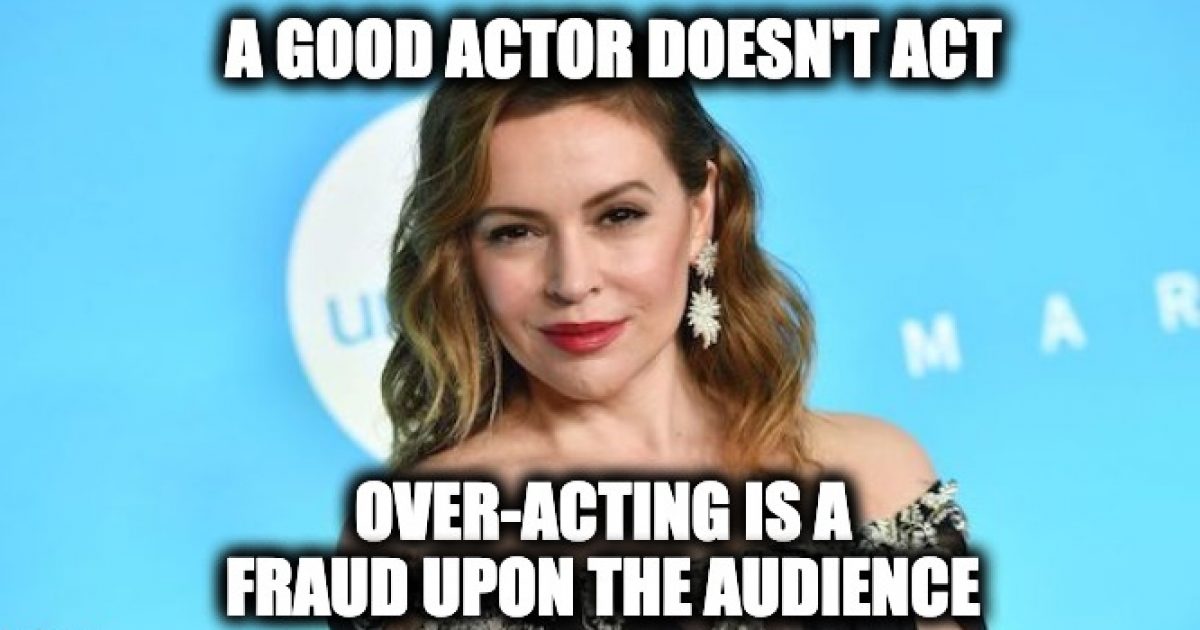 Alyssa Milano was never a good actress, and but her latest display of over-acting has proved her to be a crappy actress.

A pair of Angel Moms responded to actress Alyssa Milano over a video stunt that showed the actress crying over alleged abuse of illegal immigrant children at the hands of border patrol agents.

Milano posted a tear-laden video that Beth Baumann of Townhall described as “a horribly acted, tear-jerking plea about kids at the southern border.”  Or as my former acting coach might have said, it was cheesy and fake.

The actress, part of a Hollywood industry that typically ignores the lives of Americans and their children in their quest to make this nation lawless, referred to our borders as “arbitrary lines in the sand.” Too bad her computer doesn’t draw an arbitrary line in front of the video cam. America would be better off.

“I just watched this video of a baby being reunited with her mom,” Milano wept. “What the f*** are we doing? We are destroying lives. We are destroying children’s lives because of f***ing arbitrary lines in the sand.”

I’m bawling and I need to vent. https://t.co/AVVkyPIBbM

We’re not destroying children’s lives. The parents who choose to use their kids as a means to improve their chances of entering the country illegally are damaging their children’s lives.  On the other hand, any child that wants to become an actor and watches her performance above might have their lives ruined by believing that’s how it’s done.

Angel Moms Mary Ann Mendoza and Sabine Durden had little sympathy for Milano in an interview with Breitbart News.

Durden, who lost her 30-year-old son Dominic when he was struck by an illegal immigrant while riding his motorcycle, underscored one very underappreciated point – people who commit crimes are typically separated from their children. Why? For the safety of the kids.

“You do know that we have many children in America that have been separated from their parents because one or both broke the law?” she asked the actress. “Yes, imagine that: Someone paying the consequences of their actions and their families suffer because of it.”

“Thousands of American children have been forever taken from their families and will never be able to be reunited, hugged or kissed by their parents,” Durden continued. “So you just keep ignoring our tragedies and pain and try to persuade people that you actually care or have a real heart. No Oscar award for your poor performance.”

Mendoza, who lost her police officer son Brandon to a head-on collision with an illegal immigrant, blasted Milano for not focusing on border patrol’s efforts to save these children or the lives of American children.

“The amount of children who are being trafficked is of no concern of hers,” Mendoza told Breitbart. “The percentage of trafficked children is so much higher than those separated. Thank goodness our Border Patrol men and women are aware of this and are helping those children whom Alyssa has never mentioned,” she added.

Mendoza then issued a challenge to the actress in name only.

“If she is truly concerned about the children, fight for the American children being raped by illegal aliens in our country,” she said. “Put your boots on and leave your home and go work at the borders with our Border Patrol agents for a week.”

Not only would she learn something, but she may find something she has the talent to do down there.

Durden and Mendoza were part of a group of people who had lost loved ones to illegal immigrants, who personally met with President Trump in June of 2017 urging the passage of Kate’s Law and the No Sanctuary for Criminals Act.

“I’m a legal immigrant, and I did it the right way,” Durden told the President at the time. “I came here knowing I wanted to be here … And I had one son, Dominic. I brought him with me. That’s all I got. He was my only child.”

Mendoza slammed politicians much the same way she addressed Milano – attacking their unwillingness to fight for Americans.

“I’m tired of our politicians not caring about their fellow Americans,” she seethed. “Why? When did it ever become more important to our elected officials to protect illegal criminals in our country and not care about us?”

As for Milano – Last month she tried to perform an unannounced inspection of an illegal immigrant detention center in Florida but was immediately turned away.

She tried to use the ‘do you know who I am? Card,’ but to no avail. Why? Because she didn’t try to enter the facility … legally.

Well, either that or the people who were running that center were afraid she would attempt to act and make everyone miserable.