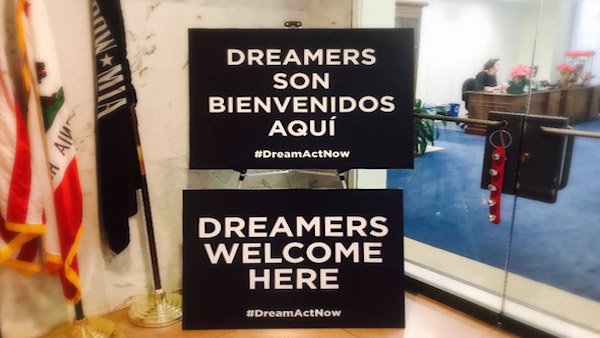 On July 16th, U.S. District Court Judge Andrew Hanen ruled that DACA is unlawful and that the Department of Homeland Security can no longer approve new applicants into the program. Two weeks later, House Democrats voted to give them jobs.

Nasty Nancy Pelosi and Democratic lemmings have quietly added a rule to the budget bill to allow illegal aliens to work as congressional staffers. Per Fox News House, Democrats added the language to the massive budget bill that “includes language to permit DACA recipients, Dreamers, to be able to work for Congress and other legislative branch agencies.”

There is an estimated 800,000 “Dreamers” in the U.S those brought here illegally by their illegal parents when they were children and who belong to Barack Obama’s Deferred Action for Childhood Arrivals (DACA). The mid-July Judge’s ruling allows DHS to continue processing DACA renewals for now as the issue continues to move through the courts.

Last night, Congress passed the 21% increase we asked for back in June. This is an important step towards retaining staff, increasing Hill diversity & growing the practice of paid internships. https://t.co/hQTOQoNtRk

“I am proud that this legislation includes a $134 million increase for Members to hire and retain the staff needed to serve our constituents,” Ryan said in a statement. “I am also pleased that we are helping ensure our workforce reflects the diversity of our nation, including by increasing funding for paid internships and allowing DACA recipients to work in the halls of Congress.”

Are they claiming that they can’t get American citizens to apply for congressional intern jobs? No! There are a limited amount of Congressional staff positions available.  Hundreds of applicants are turned away every year. Every time an illegal alien gets a Congressional job, they take it away from someone who is a citizen,  here legally, or some other kind of U.S. National.

The Democrats are saying that legality doesn’t matter. II’s not a matter of diversity, as Tim Ryan, AOC, and other Democrats claim—it’s about ignoring existing law and creating a permanent liberal majority.

The bill allowing illegals to become Congressional Interns passed by a margin of 215-207 and has yet to be voted on by the Senate. In 2019, VP Kamala Harris submitted a bill to allow Illegals to work in congress it never reached the floor.  But as the bill is anti-American, you can count on Chuck Schumer to attempt to get the bill through the Senate.

Keep in mind that Schumer is behind the issue of DACA remaining a problem.  When former President Trump was willing to trade legalization legalizing dreamers for a border barrier, Schumer said no because he didn’t want Trump to have a political victory.