Does He Know The Difference Between A Protest And A Riot? 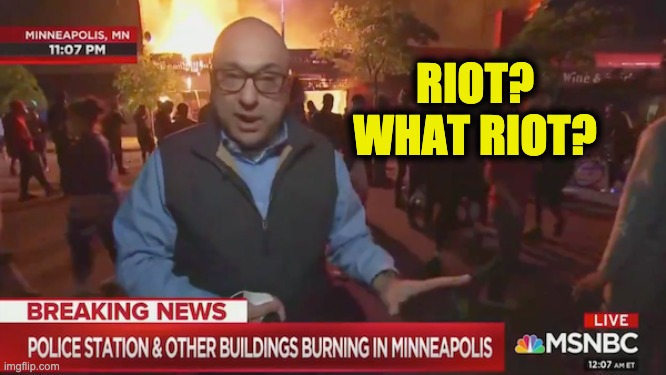 MSNBC reporter Ali Veshi did his best Leslie Nielsen impersonation, assuring viewers that “protests” in Minneapolis have not become “unruly,”… all while standing in front of a building burning thanks to what he described as not unruly protests.tali veshi Minneapolis

‘Nothing to see here. Please disperse,’ as Nielsen famously said in the movie The Naked Gun.

Anybody with a working set of eyes has seen the city overrun by violence and looting over this past week. But Veshi did his best to paint a different picture.

“I want to be clear on how I characterize this. This is mostly a protest. It is not, generally speaking, unruly but fires have been started and this crowd is relishing that,” Velshi told Brian Williams. ”

Not unruly? How does he define unruly? Dropping a nuclear weapon?

Yes, there were protests earlier that day, but what he was describing was not a protest. It was a riot, a very unruly riot.

MSNBC reporter just now: "I want to be clear on how I characterize this. This is mostly a protest. It is not generally speaking unruly."

The guy is literally standing in front of a burning building in the middle of a riot. pic.twitter.com/IzCV6On4sF

We’d like to reiterate that MSNBC views these clear-cut examples of rioting in Minneapolis as nothing more than peaceful protests.

And darn it, they’re going to report it as such even as buildings are being torched right before their viewers’ eyes.

MSNBC anchor Craig Melvin laid out that incredibly flawed logic on Thursday when he tweeted the network’s guidance on how to address the events in Minneapolis.

“This will guide our reporting in MN,” he wrote. “‘While the situation on the ground in Minneapolis is fluid, and there has been violence, it is most accurate at this time to describe what is happening there as ‘protests’–not riots.'”

Huh. I wonder if a Trump rally involved looting, arson, and violence, would abide by the same guidance?

This will guide our reporting in MN. “While the situation on the ground in Minneapolis is fluid, and there has been violence, it is most accurate at this time to describe what is happening there as "protests"–not riots.”

Oh, that makes sense. And Ali Veshi is not bald, it’s an optical illusion. Just WHAT the hell is Melvin talking about?

Fox News personality Tucker Carlson recently slammed the media for treating those burning down the city of Minneapolis with kid gloves.

MSNBC contributor Eddie Glaude dismissed the violence, saying it is “human beings’ natural inclination when they feel wronged when they feel put upon, when they’re living under oppressed conditions, is to lash out.”

Carlson responded that Glaude “has no interest in explaining how exactly racism makes people loot Target.”

“‘It just does, okay? And if you disagree with the premise, you’re a racist yourself and shut up,'” he mocked.


Tucker went on to suggest the riots are actually a form of tyranny.

“The indiscriminate use of violence by mobs is a threat to every American of all colors and backgrounds and political beliefs,” he explained.

“Democracy cannot exist when people are rioting. Rioting is a form of tyranny, where the strong and the violent oppress the weak and the unarmed. It is oppression.”

But nobody will ever view it as such as long as the media pretends that the violence, burning, looting, etc. that we’re watching are simply “protests.”

Most of this post was first seen at The Mental Recession