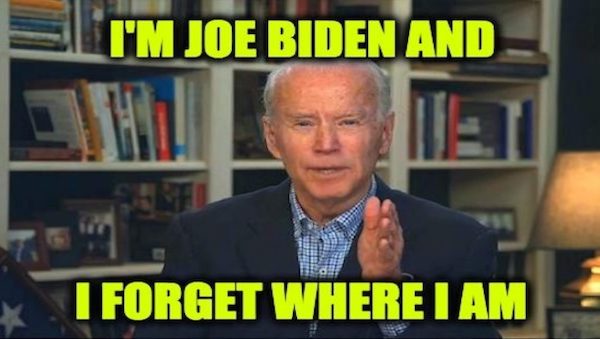 While the American Corporate Media is following President Dementia Joe and diligently reporting on his ice cream choices, the foreign press can be less fawning on the coverage of the American President. While the U.S. liberal media protects Joe Biden’s obvious loss of mental acuity, Alan Jones, political commentator for Sky News Australia warns the world about the truth instead of breaking the big story the American MSM is covering–Biden’s favorite ice cream.

The country is divided by race and politics, hundreds of thousands of people have already illegally entered the country since Biden’s inauguration, inflation is set to shoot up further, and the guy in charge shuffles out occasionally to curated press interactions and is given cards by his handlers to know what to say. Meanwhile, the partisan Presstitutes breathlessly cover what flavor ice cream the President orders.

For example, this tweet is from the White House Correspondent for the Los Angeles Times:

Shameful. Especially since this isn’t some rookie — Eli Stokols’ prior employment includes the Wall Street Journal and Politico and before that, local stations KDVR in Denver, Colorado and KSLA in Shreveport, Louisiana. Now he’s covering the Presidential ice cream beat. Congrats, I guess…? If the previous president was constantly buying ice cream in public, Stokols and his liberal media colleagues would be writing about how Trump’s consumption of dairy took away mother’s milk from some poor calf.

What happens when someone breaks rank and asks an actual question? This happens…

This is what happens when a reporter asks something other than what ice cream he’s ordering pic.twitter.com/SuKIhe5DSv

Very gently handled. Not at all like the hostility shown to the previous orange-tinted inhabitant of the White House.

Mark Levin calls the Corporate Media in the United States the “Praetorian Guard Media” because not only are they the propaganda wing of the Democrat Party, they protect the Leader no matter the cost. In this case, the cost is their reputation and truth — you know, that whole “Democracy dies in darkness” stuff that they whined about from oh, November 8, 2016, to somewhere around midday on January 20, 2021.

The media in other places don’t have that same loyalty to Dear Leader Biden, however. And some conservative-leaning news organizations around the world are very concerned about the current Leader of the Free World.

On Sky News Australia, Alan Jones, a former coach of the Australia national rugby union team turned political commentator, said that what’s going on with Biden’s clear cognitive decline is disturbing for the world. He cited a wonderful opinion piece by Kyle Smith in the New York Post and used it as a jumping-off point.

Here’s what Jones said in his own words, first in video, and below that the transcript:

ALAN JONES: Many of you wrote to me about Joe Biden, and I’ve got to say, you’ve got to wonder where this will end. I refer to the Leader of the Free World, the President of the United States of America. The American comedian, Chris Rock, once said, when Barack Obama was President, and I quote, “The President and the First Lady are kind of like the Mom and Dad of the country. And when your dad says something, you listen.”

Well, as Kyle Smith has written in the New York Post, Joe Biden is “the granddad of the country, and when you listen to Granddad, sometimes you wonder whether it’s safe for him to be near a pair of scissors.”

Kyle Smith writes this bloke “who looks like he’d have trouble using Google Maps and he happens to be in charge of all the nukes. On the rare occasions when Biden’s staff let him out of the dayroom to be seen on camera, pre-selected members of the press ask him the gentlest conceivable questions and then wind up cringing anyway as Biden gives one unnerving display after another.”

Now remember this, when he said he made it to the Senate 180 years ago and he was Vice President for 10 years. Listen to this…

BIDEN: I made it a priority my entire career to work closely with you from the time I got to the Senate 180 years ago. [CHUCKLE]

JONES: God, Xi Jinping and Vladimir Putin must be watching these press conferences laughing at their good fortune. Suddenly the world’s greatest power is in the hand of a slightly dazed bloke who looks like he’s always waking up from heavy anesthesia.

Remember the whispering episode? Like someone, as Kyle Smith writes, “auditioning to play a stalker.”

BIDEN: We’re waiting for relief. I got them 1.9 trillion dollars relief so far. They’re going to be getting checks in the mail that are consequential this week for childcare. A lot has been happened already…Just remind them, I wrote the bill on the environment. Why would I not be for it?

JONES: The disturbing thing here is that the Free World needs the United States as the Unfree World gains momentum. And the free world is run by a bloke who most probably couldn’t find his way home after dark.

Well, the Republicans are about to strike. Texas Republican Ronnie Jackson — and this is the reason why I’m telling you this — the former White House physician for Donald Trump is now a Republican Senator [Editor’s Note: Ronnie Jackson is not a Senator, but is the U.S. Representative for Texas’s 13th Congressional District.] has called on the Democrats to follow through with their prior demands regarding a President’s cognitive ability and have Joe Biden assessed.

Now, you might recall the anti-Trump brigade one year into Trump’s presidency, sought to undermine him by arguing about his mental aptitude. Things are different in America, both Trump and Obama took what’s called the Montreal Cognitive Assessment. It’s a sort of 30-point exam that tests for memory impairment. Both of them took their exams at the start of their second year in the Oval Office.

When Donald Trump was President, was screaming that anybody who was going to lead the country and be the Commander-in-Chief should take the test. That’s not an IQ test — just a standard test for age-related issues including dementia and cognitive decline.

The now-Republican Texan, Ronnie Jackson administered the test to Donald Trump. He was the White House physician, as I’ve said. As Republican Jackson now argues — rightly — a couple of days ago, of Biden, he says, “I think he is demonstrating every single day that something is going on… you don’t need to be a physician to look at this behavior and see that there is something of concern happening,” unquote.

It’s clear there is no way that Joe Biden would pass a test to determine his cognitive ability or memory impairment. After all, he said he came into the Senate 180 years ago and was Vice President for 10 years. But, as I’ve said many times, Biden’s cognitive decline is a real concern, the greater concern is he would be replaced by the ideologically dangerous Kamala Harris.