Why Is Adam Schiff Covering Up Michael Atkinson’s Testimony? 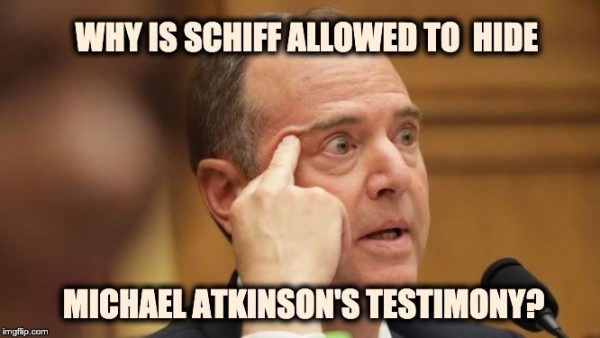 The bug-eyed bloviating barrister of Burbank,  Rep. Adam Schiff has released the transcripts of all but one of the witnesses who testified before his secret house impeachment hearings. The transcript Adam Schiff is covering up is the testimony provided by Intelligence Community Inspector General Michael Atkinson who sent along the whistleblower’s complaint and asked for it to be urgently addressed. This transcript is clearly relevant to the impeachment hoax and should be released immediately. So what is Schiff trying to cover up? Adam Schiff Michael Atkinson

Per the Washington Times

“The reason it hasn’t been released is it’s not helpful to Adam Schiff. It is not helpful to the whistleblower,” said Rep. John Ratcliffe, Texas Republican, who took part in the October interview with Mr. Atkinson. “It raises credibility issues about both of them.”

Members of the House Permanent Select Committee on Intelligence who conducted the interview are barred from disclosing details. But Republicans on the committee said the testimony should be heard at the president’s impeachment trial in the Senate.

(…)Mr. Atkinson’s briefing for House lawmakers covered the origins of the whistleblower complaint that led to the two articles of impeachment. Mr. Trump’s supporters charge that the whistleblower was part of a scheme to take down the president and that the complaint was coordinated by Mr. Schiff, chairman of the intelligence committee and the lead House impeachment manager prosecuting the case.

But the closed-door committee session remains a focus of House Republicans with knowledge of the interview.

Mr. Ratcliffe said they have demanded the release of a transcript of the interview, especially because Mr. Atkinson identified other fact witnesses.

“It addresses the issue about contacts between Schiff, his staff and the whistleblower, and what the inspector general knows about that. So those are material facts that should be talked about, but Adam Schiff has prevented that,” Mr. Ratcliffe told The Washington Times.

Back in November Rep. Ratcliff had a twitter conversation with investigative reporter Paul Sperry and said something similar to what he said to the Washington Times:

I know why @paulsperry_ It’s because I asked IG Atkinson about his “investigation” into the contacts between Schiff’s staff and the person who later became the whistleblower. The transcript is classified “secret” so Schiff can prevent you from seeing the answers to my questions

“Contrary to what has been said,” the official said, “the chairman does not have the ability unilaterally to classify or declassify [an intelligence committee] transcript.”

Mr. Ratcliffe said that whatever Mr. Schiff wants to call it — a deposition or a transcribed interview — the information is important for the American people to see.

Perhaps the reason Schiff is holding back has something to do with this Sperry report:

BREAKING: Whistleblower Was Overheard in 2017 Plotting With Schiff Ally About Need to Remove Trumphttps://t.co/huxDEwPQBm

It doesn’t matter, Adam Schiff is hiding something, Chuck Schumer keeps talking about a cover-up, why isn’t he demanding that Adam Schiff stop covering up Michael Atkinson’s Testimony? And why is the media and the GOP letting Schiff get away with it?