Adam Schiff Takes A Giant Step Away From Impeachment 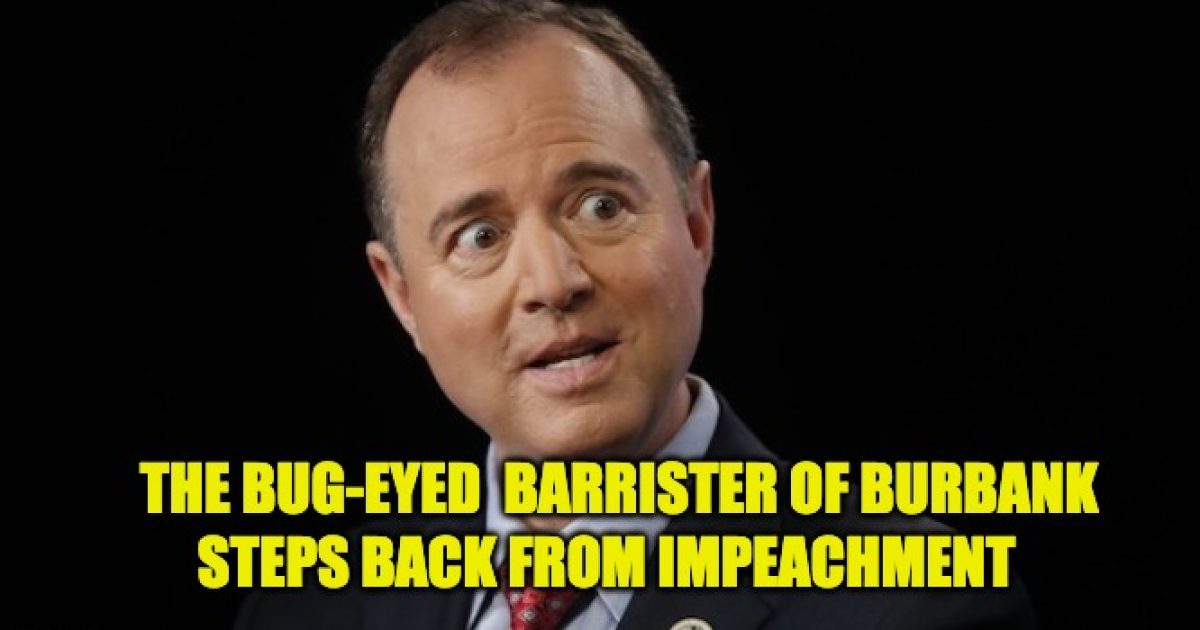 Adam Schiff has always been one of the lead liars pushing the fake Russian scandal. From the very beginning, the bug-eyed barrister from Burbank claimed to have proof that President Trump colluded with the Russians. He never came up with that proof. And thanks to Robert Mueller’s performance at his congressional hearings that proof seems even more nonsensical than ever. Even Democrats believe the  Mueller testimony was a disaster, but Adam Schiff-head says Pres Trump was proven to be a crook.  But if he really believed Trump to be guilty he wouldn’t have taken the giant step away from Impeachment he took today.

On CNN’s “New Day,” he praised Mueller’s performance as powerful, but gave little weight to the possibility of Trump being impeached, saying the only way he’s leaving office, at this point, is “by being voted out.”

Well, I think for the first time, people got to hear from the man who did the investigation himself. His work was not filtered by Bill Barr who misrepresented it. It wasn’t filtered by the president who certainly misrepresents it on a daily basis.

But this is guy who spent the last two years of his life, has served the country his entire life talking, about that work and laying out how unethical, unpatriotic, criminal these actions are to willingly accept help from a foreign government to obstruct justice. So I think hearing that from the man who did the work was powerful.

The only thing powerfull about Mueller’s testimony was the feeling of sadness people had. seeing the former special prosecutor look so feeble.

We do need to be realistic, and that is, the only way he’s leaving office, at least at this point, is by being voted out, and I think our efforts need to be made in every respect to make sure we turn out our people.  Should we put the country through an impeachment? I haven’t been convinced yet that we should. Going through that kind of momentous and disruptive experience for the country, I think, is not something we go into lightly.”

But making false claims about a president is something Schiff goes into lightly. And those claims will continue.  Adam Schiff talks about Trump’s actions putting this country in danger but he doesn’t really care about that. He cares about his party more than national security. That was proven when he became Barack Obama’s house-Jew and helped to lead the effort to sell America on the lousy Iran deal. The same could be said about his Chairman-partner-in-crime the Jerrold Nadler.

Their only purpose in pushing the false Russia/obstruction narrative has ALWAYS been about returning the Oval Office to Democratic Party hands. They never cared about the truth, nor did they care that the American people wanted Donald Trump to be their president.  Even his step back from impeachment has nothing to do with what he believes. He’s only backing away to protect 2020 Democratic Party votes, and to raise his standing among the party leadership. Schiff doesn’t really believe what he says, he has no conscience.

To paraphrase something Shiff said during the Mueller hearing.  We can — and must — decide that this centuries-old experiment we call America is worth cherishing. And the ONLY way to do that is to stop the Democrats’ effort to overturn the 2016 election and to make sure they lose again in 2020.

Below is a video of the bug-eyed barrister from Burbank’s appearance on CNN’s New Day.