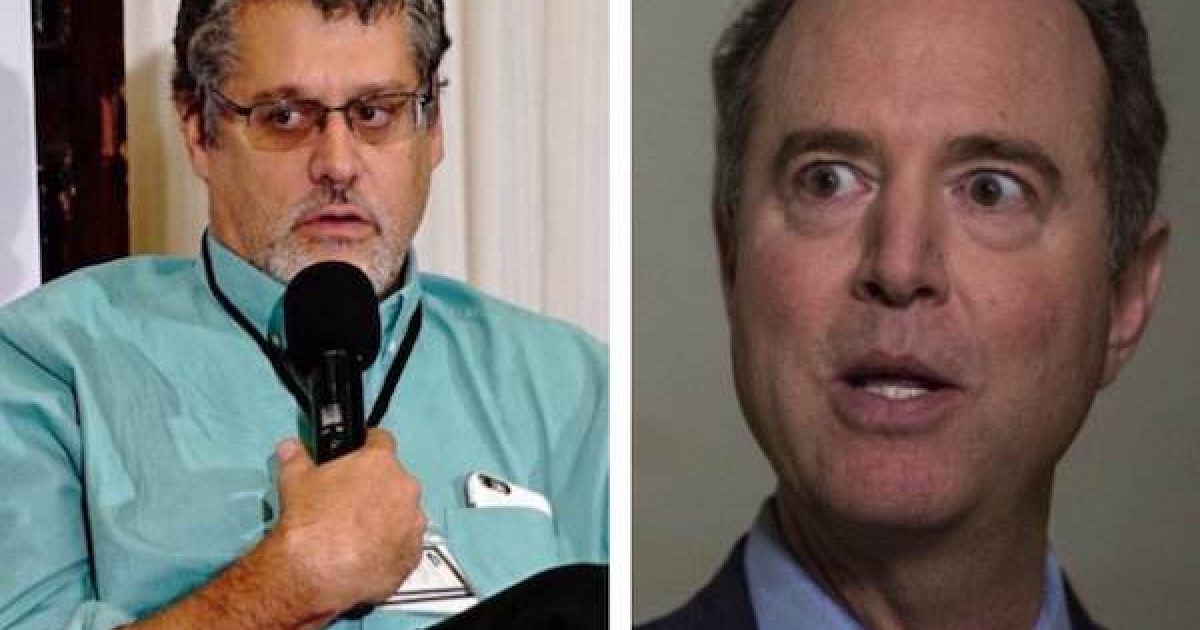 The Hill’s John Solomon is reporting Congressional leaker-in-chief Adam Schiff (D-CA) had an undisclosed meeting with the Glen Simpson, the founder of FusionGPS which is the company that produced the infamous and unverified Steele dossier, the primary evidence for the FBI’s FISA court surveillance warrant against Trump campaign adviser Carter Page. Schiff was the ranking member of the House Intelligence Committee, and he is suspected of being the primary source of leaks about the committee’s non-public hearings. With the Democrats’ takeover of the House, Schiff is now the chairman of that committee.

The meeting occurred this past July at a Security conference held in Aspen Colorado. Solomon found pictures of the two together at the event. He didn’t publish the photos but he confronted the offices of the two using the images as proof of the meeting.

Per Solomon, the pictures show “Schiff meeting at the event with Fusion GPS Founder Glenn Simpson, one of the key and most controversial figures in the Russia collusion scandal. Both men insisted to me through spokesmen that they met only briefly last July.”

They only met briefly? I wonder if they talked about golf and grandchildren like Bill Clinton and Loretta Lynch supposedly discussed when they had their secret meeting on the tarmac of the Phoenix Airport. The Bubba/Lynch meeting was a conflict of interests as it occurred just before FBI Director Comey (who reported to Lynch) made his speech basically declaring Hillary guilty, but he didn’t think any prosecutor would take the case.

Similarly, it was a conflict when Schiff met with Simpson in July, the FusionGPS head was a witness in the House Intelligence Committee investigation giving sworn testimony about the still unproven, collusion between Russia and the Trump campaign. Per Solomon, “by the time of the meeting, the House Intelligence Committee had already received evidence from a senior Justice Department official, Bruce Ohr, that called into question Simpson’s testimony to lawmakers.”

Specifically, Simpson claimed he had not begun meeting with Ohr until after Thanksgiving 2016, well after the FBI had begun investigating Trump-Russia collusion and after the presidential election in which Simpson’s client, Clinton, lost to Trump.

But Ohr provided compelling evidence, including calendar notations, testimony and handwritten notes, showing that Simpson met with him in August 2016, well before the election and during a time when Steele was helping the FBI start an investigation into Trump.

When the pictures of the two together at Aspen were shared with the staffs of Schiff and Simpson:

“In the summer of 2018, Mr. Simpson attended a media-sponsored social event where he exchanged small talk with Rep. Schiff and many other people who were in attendance,” Fusion GPS said in a statement to me. “The conversation between the two was brief and did not cover anything substantive. There has been no subsequent contact between Mr. Simpson and Rep. Schiff.”

The congressman’s response was even more vague: “The chairman did not have any pre-planned meeting with Glenn Simpson, and any conversation with him at the Aspen conference would have been brief and social in nature,” Schiff spokesman Patrick Boland said.

Talk about hypocrisy! Remember when Schiff demanded that then-Chairman Devin Nunes (R-CA), be investigated for having meetings with a few of Trump’s NSC officials. The meetings were about the Obama administration’s unmasking of Trump campaign people. Schiff flipped because Nunes didn’t tell the committee about the meeting.

But both GOP and Democratic officials on the committee, including some lawmakers, said there is no evidence that Schiff disclosed his contact with Simpson to committee members.

“I don’t know if they’re under any obligation to disclose it but, certainly if we were conspiracy theorists the way that my Democrat colleagues appear to be, we could weave an awful tale into that and weave all kinds of nonsense about it,” Rep. Mike Conaway, the Texas Republican who took over the Russia probe when Nunes recused himself, told Hill.TV.

“Had the tables been turned and I had been seen at a circumstance like that, my guess is [Schiff] would have demanded I had a full conversation as to what I did,” he added

If a Republican had that meeting Schiff would have a cow of course if he believes AOC’s “green new deal,” it would be a non-farting cow.

I doubt if we will ever know of the meeting was really benign and “the conversation between the two was brief and did not cover anything substantive.” or was inside information and strategy for destroying the Trump presidency discussed. Indeed, based on their public comments about Trump, removing him from office or defeating him in 2020 seems to be a priority for them. And the Bubba Clinton/Loretta Lynch meeting was two and a half years ago, and we still don’t know the truth about the conversation on the Phoenix tarmac.