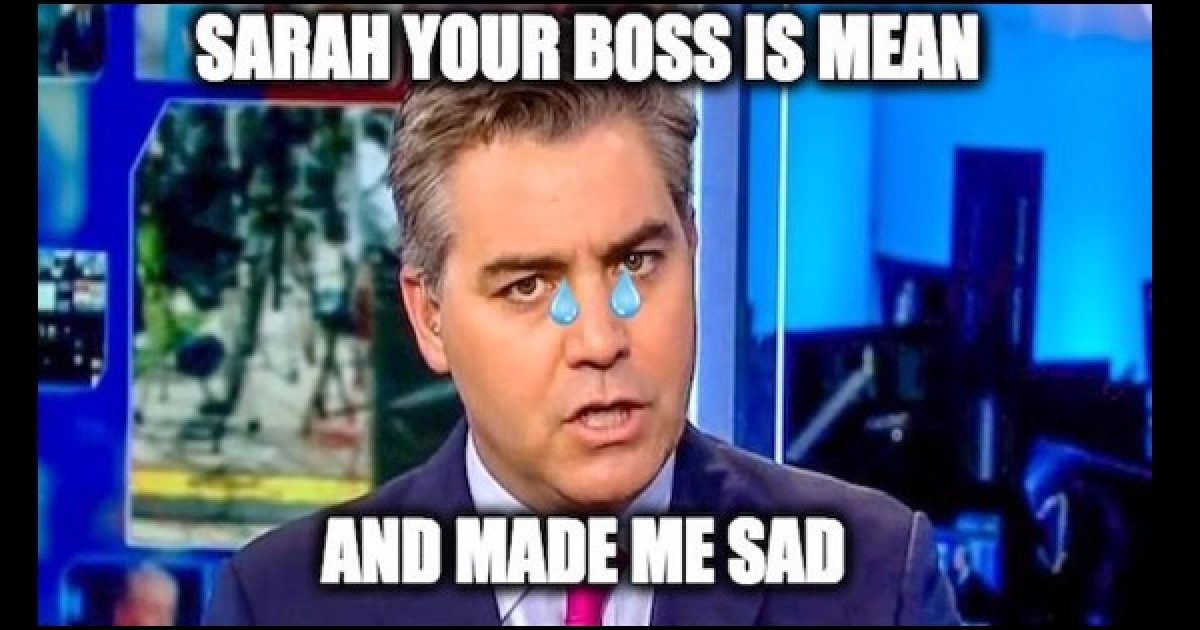 The clown-prince of the White House press corps, CNN’s Jim Acosta was genuinely upset that he wasn’t called upon during President Trump’s Rose Garden press conference with Brazil president Jair Bolsaonaro Tuesday, and Sarah Sanders thinks it’s hilarious. The CNN Narcissist in-Chief Acosta, who earlier in the week discussed the President’s mental stability on air, complained that a reporter from the Daily Caller was offered a chance to ask a question, while he was not.

Following the press conference, Acosta took to his network to offer his opinion that Democrats love Jews (they don’t) and complain that “a reporter with The Daily Caller right at the very end” had been called on, then criticized said reporter for asking what he considers to be a softball question. That’s right, a man who participated in his network’s eight years-worth of softball questions to Barack Obama was not pleased.

“You know, it was the question was asked in a way that really teed it up like a game of tee ball here in the Rose Garden,” Acosta fumed. “The President was just sort of served up a softball there when he was asked, you know, whether or not the Democrats are advancing a lot of socialist ideas.”

“I tried something novel,” he said. “Rather than tell the President what was happening on a particular issue, I asked him to tell me.”

I tried something novel. Rather than tell the President what was happening on a particular issue, I asked him to tell me https://t.co/utXU0PfQx7

Acosta’s complaints didn’t end with the realization that a Daily Caller reporter is better at his job. He moved on to blasting Bolsaonaro for using the term ‘fake news’ and even insinuated conservatives have a greater media influence than do liberals.

“When you have the President of Brazil calling the press ‘fake news,’ he is — he is trying to essentially, you know, in a sycophantic sort of way, suck up to the President of the United States,” Acosta railed.

“[H]e likes to talk about how there’s this media collusion game that is stacked against him when he has one of the most powerful social media voices throughout and so I think that just has to be said as well,” he continued, seemingly confusing the mainstream media with social media.

Acosta then claimed Trump’s attacks on the media are him “pulling a three-card-Monty.”

“Conservatives aren’t being discriminated and abused on social media,” he said, a statement that fits into the technical category of “Bull Crap.”

Sanders Smacks Him as Usual

The White House press secretary had a little fun at Acosta’s expense, blasting him with a ‘dear diary’ reference.

Sanders has a rich history of obliterating Acosta’s ego. Shes motivated him to walk out of the room when she refused to denounce the President’s statement that the media is the “enemy of the people,” accused him of finding it difficult “to understand even short sentences,” and even suggested that her whining kids have helped prepare her for dealing with the CNN reporter.

Despite having raised children who at times were a bit whiny, I still cannot take Acosta’s narcissistic antics.