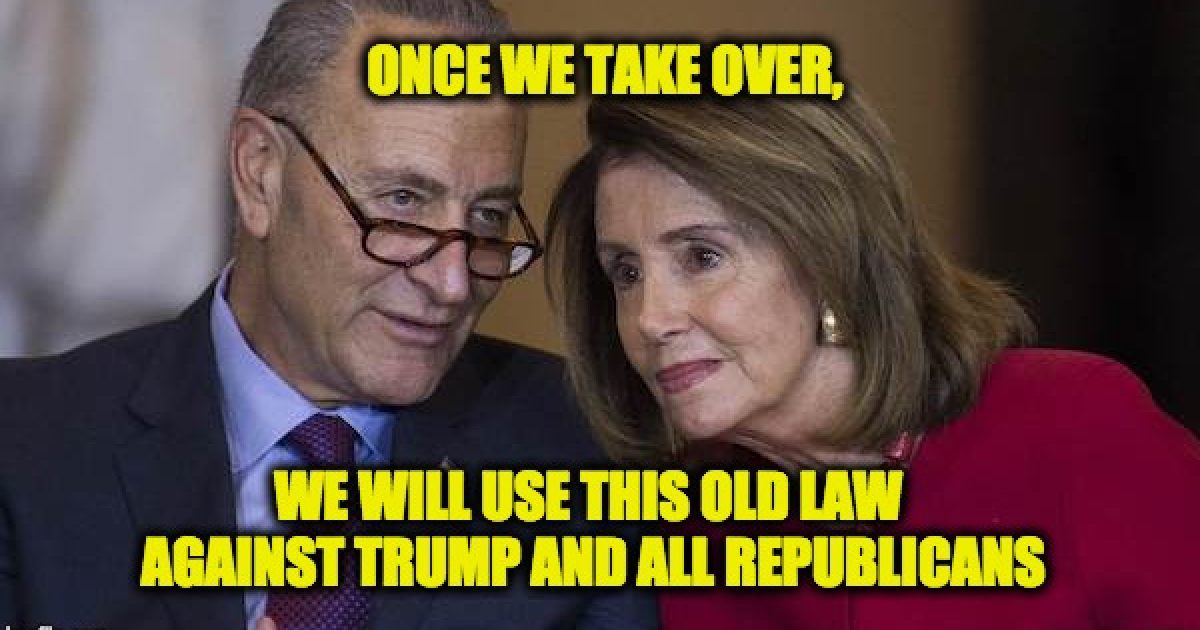 If ever a headline begged for the rhetorical “What could go wrong?” — it’s this one. Politico reports that after the midterm election, Democrats in Congress have a plan to invoke a law from 1924 that allows the chairmen of tax policy committees to privately examine the tax returns of anyone who files one in the United States, even without that filer’s permission.

Their target will be President Trump.  The president, at least, will be their initial target.  Politico is coy with further speculation, but it’s a safe bet that if they regain a majority in at least one chamber of Congress, Democrats will use this power against anyone they want to.

The nearly 100-year-old statute allows the chairmen of Congress’ tax committees to look at anyone’s returns, and Democrats say they intend to use that power to help answer a long list of questions about Trump’s finances. Many also want to use it to make public confidential information about Trump’s taxes that he’s steadfastly refused to release. …

That could bring a swift end to the long-running battle over Trump’s returns, while generating loads of fodder for what promises to be an array of investigations into the administration if Democrats win power.

The Democrats aren’t advertising their intentions, however.

Lawmakers are not doing much now to advertise their opportunity to seize Trump’s returns ahead of the midterm elections, in part because some believe it will only rile his supporters.

The Democrats are probably right about that last point.  It would rile Trump’s supporters — but not only because it would affect Trump.  The Democrats’ willingness to rush into such tactics would be convincing evidence that they would have no compunction about using them against anyone they felt like targeting.

“Loads of fodder” for an “array of investigations” is not a description of a careful, limited-scope use of someone’s tax returns.  It evokes political opportunism slavering to weaponize the power of government against as many people as possible.

Interestingly, the Democrats were more open 18 months ago about wanting to use the 1924 law (the Revenue Act of 1924) to get Trump’s returns.  There were quite a few reports early in 2017on their desire to invoke the law for that purpose, and even some lecturing opinion journalism on the topic, denouncing Republicans in Congress for not joining forces with them.

Politico has continued fanning the flames of this effort into 2018, as have other media outlets like CNN.  The following encouragement from Politico’s latest article (at the top link) seems clearly intended for Trump’s opponents — people who would rejoice at the thought of weaponizing government against members of his cabinet:

Insiders predict though that once the public becomes aware it’s possible for Democrats to unilaterally seize Trump’s returns, they will face enormous political pressure to make them available. Others say once members of Congress receive copies of the returns, it would only be a matter of time before they are leaked to reporters.

But I think Politico, and the Democrats, misread their moment at this point.  If there was a political “center” 18 months ago that might agree it could be useful to investigate Trump’s tax returns for a few limited purposes, that center has taken a big hit in just the last two weeks.

No one would believe now that that’s all the Democrats had in mind.  The all-out, evidence-free, innuendo-laced assault by Democrats on Brett Kavanaugh and his family, for the wholly political purpose of preventing Trump from installing the justice of his choice on the Supreme Court, has horrified decent people.

The Democrats seem to think most Americans agree with them that destroying a man’s reputation and career and putting his family through hell is fair game if the goal is to prevent the constitutionally-prescribed outcome of a U.S. election; i.e., a president nominating the justices he chooses.

That’s why this passage from Politico is essential, as brief as it is:

Joe Thorndike, director of the Tax History Project at the nonpartisan Tax Analysts … said … there’s no reason why other elected officials might not become subject to the same standard, or perhaps even private businesses or individual taxpayers.

“It’s not limited to the president – they could release anybody’s tax return,” said Thorndike. “Where does it end?”

After the last two weeks of frenzy over Judge Kavanaugh, with increasingly non-credible allegations being used to run an out-and-out smear campaign against him, the sense that it will not end is in the forefront of many minds.

This past week, Lindsey Graham spoke for many when he exclaimed at the Democrats on the Judiciary Committee: “Boy, you all want power. God, I hope you never get it!”

There should have to be a legitimate, rule-of-law reason to prioritize investigating any one of Trump, his officials, or his supporters.  Not one of them should have his or her tax returns examined by Congress, or an investigation launched, because of being a political opponent of the Democratic Party and its agenda.  But that is precisely what the Democrats have in mind.

Many perfectly innocent people would lose all their savings, and perhaps their jobs and their homes, trying to cope with an onslaught of such politically motivated “investigations.”  And it has never been so clear that the leaders of the Democratic Party in 2018 are quite willing to inflict that on them.

It seems odd, in fact, but perhaps is “a blessing in disguise,” that the left-wing media have so little self-awareness that they don’t see how harshly visible and damning the Democrats’ motives, and their own, have become.