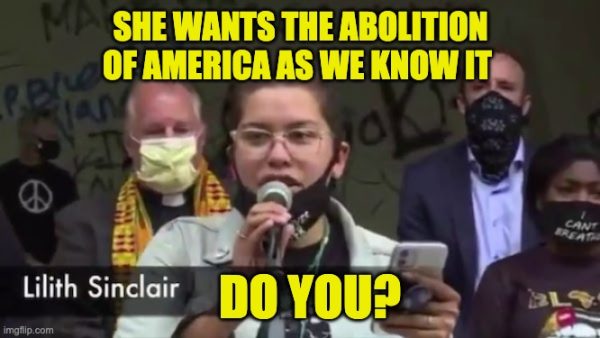 An organizer of the protests in Portland, Oregon, claims their mission is the “abolition of the United States as we know it.” It’s a shame that the mainstream media encourages anti-cop, anti-America protesters. These radicals all need to spend a month in a third-world nation so they can see what it’s like to be truly oppressed.

By the time lefties realize what they’ve done to the country, it’ll be too late, and by the time the rest of America understands what they’re up to, it may be too late to stop them. That’s why President Trump is demanding that they are stopped immediately.

Check this out, via Willamette Week:

Lilith Sinclair is leading the marches that defy City Commissioner Jo Ann Hardesty’s order to stay home. She describes herself as an Afro-Indigenous-Non-Binary Local Organizer in Portland. Personally, I wonder Sinclair fits all that on a business card. But more important is the rest of what she says.

Sinclair, 25, is an activist who works with with the workers’ rights group Portland Jobs With Justice. (That group is not directly connected to organizing the past week’s protests.) Sinclair, who wishes to be referred to by the gender pronouns they and them, has been involved in activism for years, including volunteering at the Portland Occupy ICE Camp in 2018. Sinclair was an organizer of a march May 31 that drew thousands of demonstrators. During Sunday’s rally, they led the group of over 1,000 demonstrators from Laurelhurst Park in Northeast Portland to downtown at the Justice Center. “We’re not here for apologies,” Sinclair said into a megaphone Sunday. “We’re here to dismantle, defund and completely destroy the police.” WW asked them about defying the pleas from city officials to stay off the streets.

It was only a matter of time before some copycats tried to recreate Seattle’s CHOP Zone, and it’s finally happened. Protesters in the city of Portland have attempted to recreate the “autonomous zone” by setting up tents and trying to barricade streets, proving once again these people are relentless.

Demonstrators started putting up the tents in the downtown area of Portland’s Lownsdale Square, which is located across the street from the federal Pioneer Courthouse. This is one of the federal properties that the Department of Homeland Security tried to protect by calling on federal officers several weeks ago.

A camera at the Portland Standard Building showed protesters beginning to assemble tents late Tuesday night in the same park where “Occupy Portland” set up in 2011, KATU reported.

An unofficial Twitter page attributed to a group of anti-capitalist, anti-fascist teens who call themselves the Pacific Northwest Youth Liberation Front said protesters want to establish the Chinook Land Autonomous Territory, or CLAT, in downtown Portland. The Chinook people include several indigenous groups native to the Pacific Northwest.

Barricade at the Chinook Land Autonomous Territory (#CLAT).
People are needed here ALL night long, especially in the early morning! Get on over rn! Bring some tents. pic.twitter.com/cP5cG77m9m

These “protesters” need to understand that in the type of America they are looking to create would never allow their protest or any protest. And America must realize that these protests, along with the socialists controlling Joe Biden, are also looking to abolish America as we know it. Abraham Lincoln once said, America will never be destroyed from the outside. If we falter and lose our freedoms, it will be because we destroyed ourselves. Remember this as we get closer to election day–do you want freedom, or do you want Lilith Sinclair’s “abolition of the United States as we know it.”