A Holocaust Mystery: Ken Burns Gets Lost in a Bermuda Triangle 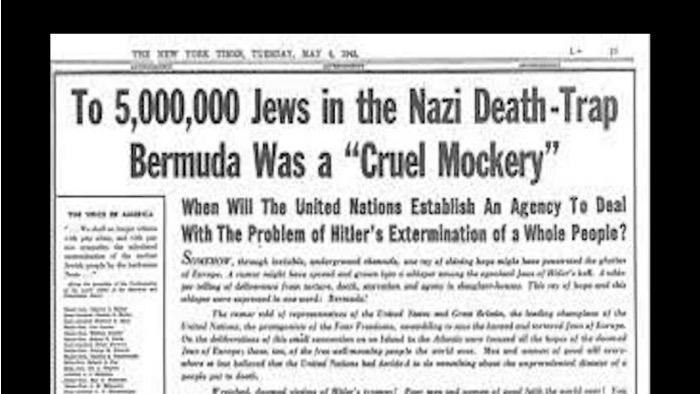 Scientists have long been puzzled by the frequent disappearance of ships in the Bermuda Triangle. In his new Holocaust documentary, filmmaker Ken Burns has managed to make the entire Bermuda Conference on Refugees vanish.

A rising tide of calls in the British parliament, media, and churches in early 1943 for the Allies to rescue Jews from the Nazi slaughter. Prodded the British Foreign Office and the U.S. State Department they planned an Anglo-American conference on what they termed the refugee problem.

The island of Bermuda was chosen for the gathering. Nahum Goldmann, co-chairman of the World Jewish Congress, told colleagues that the remote setting was selected so that “it will take place practically in secret, without the pressure of public opinion.”

Like the Evian Conference on Refugees ﬁve years earlier, Bermuda was conceived as a gesture rather than a serious attempt to rescue Jews from the raging Holocaust. Jewish Agency official Arthur Lourie said its aim was “quieting public opinion without undertaking anything effective.”

The Joint Emergency Committee of European Jewish Affairs, an umbrella for major U.S. Jewish organizations, requested permission to send representatives to the conference. The request was rejected. The Committee sent Undersecretary of State Sumner Welles a detailed list of proposals for rescue action. The proposals were ignored.

A group of seven Jewish congressmen met with President Franklin D. Roosevelt to discuss the rescue issue in advance of the Bermuda gathering. “It was a very unsatisfactory interview,” Congressman Daniel Ellison (R-Maryland) reported afterward. “[We] asked the President about refugees, the White Paper, etc. What he proposed to do about these things. [We] made a number of suggestions to him as to what [we] thought he ought to do, and the answer to all of these suggestions was ‘No.’”

The Bermuda Conference opened on April 19, 1943. Both sides had agreed beforehand that there would be no emphasis on the plight of the Jews—even the name of the conference masked their identity—nor would they adopt any policies that would benefit Jews in particular.

The U.S. would not agree to the use of any trans-Atlantic ships to transport refugees, not even troop supply ships that were returning from Europe empty. And there would be no increase in the number of refugees admitted to the United States.

The British delegates refused to discuss Palestine as a possible haven because of Arab opposition. They also rejected negotiating with the Nazis to release Jews on the grounds that “many of the potential refugees are empty mouths for which Hitler has no use.” Their release “would be relieving Hitler of an obligation to take care of these useless people,” a senior British official asserted.

The delegates dismissed the idea of shipping food to starving Jews as a violation of the Allied blockade of Axis Europe, even though they previously made an exception for German-occupied Greece. Instead, the Bermuda conferees spent a lot of time on very small-scale steps, mainly evacuating 5,000 Jewish refugees from Spain to the Libyan region of Cyrenaica.

After twelve days of basking in the Caribbean sun, the delegates adjourned without achieving anything of significance. The two governments kept the proceedings of the conference secret, which only generated further suspicion.

The failure of the Bermuda Conference provoked the first serious public criticism of U.S. refugee policy. A large advertisement in the New York Times, sponsored by the rescue advocates known as the Bergson Group, was headlined “To 5,000,000 Jews in the Nazi Death-Trap, Bermuda was a Cruel Mockery.”

Congressman Emanuel Celler (D-New York) accused the delegates in Bermuda of engaging in “diplomatic tight-rope walking” at a time when “thousands of Jews are being killed daily.” In a slap at Congressman Sol Boom (D-New York), who was a staunch defender of the administration’s refugee policy and a member of the U.S. delegation to Bermuda, Rep. Celler characterized the conference as “a bloomin’ fiasco.”

The editors of The New Republic charged that Bermuda revealed “the bitter truth” that the U.S. and Great Britain were unwilling to aid “these potential refugees from murder.… If the Anglo-Saxon nations continue on their present course, we shall have connived with Hitler in one of the most terrible episodes of history.”

Bermuda galvanized some mainstream Jewish leaders to speak out more forcefully. Dr. Israel Goldstein, president of the Synagogue Council of America (the umbrella for the major Jewish religious denominations), charged that “the victims are not being rescued because the democracies do not want them, and the job of the Bermuda conference apparently was not to rescue victims of Nazi terror but to rescue our State Department and the British Foreign Office from possible embarrassment.”

Even the chief British delegate to Bermuda, Richard Law, later acknowledged that Bermuda was a “façade for inaction.”

The Bermuda Conference was one of the era’s most vivid demonstrations of the Roosevelt administration’s abandonment of the Jews, as well as a pivotal moment in stimulating stronger American Jewish protests against the Holocaust.

How, then, could Ken Burns have omitted any mention of Bermuda from his six-hour-long PBS series on “The U.S. and the Holocaust”? Was it because one of the themes of the series was to minimize President Roosevelt’s responsibility for America’s harsh refugee policy, and the Bermuda Conference conflicted with that narrative?

For now, this question remains a mystery. To date, no interviewer has asked Burns about this glaring omission, and he has not volunteered any comment. Is he hoping that, like ships disappearing in the Bermuda Triangle, his own Bermuda omission will vanish from public view before anyone notices?

(Prof. Medoff is the founding director of The David S. Wyman Institute for Holocaust Studies and the author of more than 20 books about Jewish history and the Holocaust. Prof. Penkower is Professor Emeritus of Modern Jewish History at the Machon Lander Graduate School of Jewish Studies and author of a five-volume study about the rise of the State of Israel between the years 1933-1948.)