Are They Are Channeling Jon Lovitz? 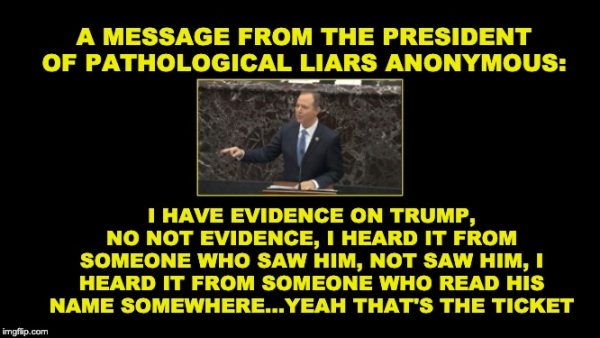 Schiff is absolutely infatuated with the sound of his own voice. He’s one of the many Democrats that are desperate to have the rest of us believe his narrative. 5 favorite lies

Because if we do NOT believe their lies, how can anyone possibly accept the evidence against Trump? And if they can’t kneecap Trump by smearing him, what *possible* chance do they have against the crowds he can draw?

Let’s have a look at some of their favorite lies to fling Trump’s way, and why they fall flat.

Trump, they claim, is a massive power-mad monster that threatens the very American Democratic process itself.

Oh really? Remind us. Did he at ANY point block or interfere with the Mueller Report’s actions? Did he give access to people and information in which he would have been entirely within his right to invoke ‘executive privilege’? When lower courts blocked him from exercising his lawful Article II responsibilities, did he ignore them, or did he fight the decisions in a higher court? What about Executive powers? Has he been running amok with his ‘pen and his phone’? If anything, he’s pissed off Chuck and Nancy for telling them that CONGRESS makes laws, and it’s not up to him to make them.

Schiff is STILL peddling the busted lie about Trump being Putin’s puppet. Mueller spent TENS of millions of taxpayer dollars turning over every stone trying (desperately) to prove his guilt. The came up empty. The Mueller Report stated it expressly: “Indeed, Rosenstein noted that there is “no allegation in this indictment that any American had any knowledge” of the Russian effort. — The Hill”

What’s the matter, Schiff? The same guy who so loudly chides Trump for not listening to the political advice of his foreign advisors seems to be having a hard time with the findings of a Special Counsel that produced a result contrary to the one he so desperately craved. Don’t you believe the findings of the Special Counsel? If so, why are you still droning on about Russia? If not, how DARE you criticize Trump for challenging his own advisors.

This gets a heavy dose of the ‘Russia’ treatment, too. But only to explain away where the story came from in the first place.

One of Schiff’s own hand-picked Witnesses in the House Impeachment testimony — the ‘martyred’ Ambassador — testified that in her personal preparation for her appointment as Ambassador, Obama’s team included conflicts of interest centered on Hunter Biden’s Ukraine employment as a prep question. Officials in the Obama administration raised objections to the conflict of interest, but nothing came of it.

So far as the actual story itself, journalists digging into the story have been personally attacked, and their reputation impugned — even when they produce original source documents that raise more questions than answers.

White House meetings where Obama officials raised the issues of Burisma and Hunter by name came up. News stories about no less than FIVE family members of Biden having their financial futures and fortunes inexplicably tied to the activities of the White House have been reported.

And it REALLY looks like we only see the tip of the iceberg.

But Schiff assures us that Biden is an ‘honorable’ man.

To use another of his phrases, if Biden really IS innocent, he has nothing to hide.

Trump has never once taken the stand. He has not said a single word about what motivated his various ‘objectionable’ behavior. Yet, somehow, the Democrats can tell you EXACTLY what he was thinking in the private motivations of his heart in each of his decisions.

When he was on that phone with the Ukranian President, Schiff can tell you EXACTLY what Trump was thinking. And when Trump played hardball with the Congressional subpoena demands, they were privy to his inner monologue.

That’s why they can say ‘conclusively’ that Trump’s phone call was motivated by a desire to destroy an enemy, and not (since Mueller had JUST concluded) to get to the bottom of the apparent conspiracy against him from 2016 which we now know conclusively included players in Ukraine. It assumes it has NOTHING to do with a video in which Biden boasted about — allow the irony to really sink in — threatening to withhold a billion dollars in aid to Ukraine unless a Ukrainian official had been fired by midnight. And Joe Biden boasted ‘son of a bitch, he got fired.’

What about his telling Congress to go pound sand? We’ve already shown his cooperation with Mueller and Court rulings. What made THIS demand any different?

Plenty. The President’s own rights as the accused were systematically trampled in Congress.

Trump was NOT permitted to call any witnesses of his own. He was NOT allowed to cross-examine, he was NOT even allowed to have White House counsel present.

Is that important or relevant?

Of course, it is.

Remember how Schiff so jealously guarded the secrecy of information on the Whistleblower, and forbade witnesses to answer specific categories of questions? He was protecting ‘privileged information.’ If there is no White House lawyer present, who will tell Schiff — the witness cannot answer this question? Who would tell Schiff, ‘You are exceeding the boundaries of the separation of powers.’ Does anyone really believe he would NOT try to have questions answered whether they were privileged or not?

Doesn’t Schiff know that a Judge would have ordered that WH counsel must be present if any Executive branch witness should be called?

Lie #5) Trump claimed that Article II gives him the right to do ‘whatever he wants.’

They use this to buttress their claim that he’s a despot. But is that what he really said?

He can do ‘anything’? Really?

Do they think he means he can launch wars without Congressional approval? Write executive orders that supersede immigration law? Spy on political rivals? Weaponize the IRS to help him win reelection? No, Trump didn’t do any of those things.

Does CONTEXT matter? It took a while to dig it up, but that quote they love to trot out came from his July 23, 2019 speech to TPUSA.

Here’s the context there:

There’s never been a better time. Because our future is the brightest that it’s ever been. A new poll only — you got to hear this. How about this whole witch hunt that’s going on? Should I talk about it for a second? [Audience calls Yeah]

First of all, it’s very bad for our country. Makes it very hard to deal with Russia. And we should be able — they’re a nuclear power. They have a big country. And we should be able to deal with them without having this artificial stuff. But think of it: Only 11 percent, in a new poll, favor the starting of this ridiculous impeachment hearings that are going on. You hear about it. So I said this morning — I said — I wrote it out.

I said, “Let’s see…” — because I’m watching. It goes on for years and years. No collusion, no obstruction. “Oh, that’s not good enough. Let’s go more.” Forty million dollars, interview 500 people — they got nothing. I could find something — I could take anybody in this audience. Give me $40 million.

Give me unlimited FBI, unlimited interviews, unlimited — they interviewed 500 people. Listen to this: Two thousand five hundred subpoenas. They did everything. Their collusion; no collusion. They have no collusion. Then I have an Article 2, where I have the right to do whatever I want as President.

He’s obviously talking about what Article II permits him to do, relating to what Democrats tried to claim was obstruction.

He did not exercise that prerogative, but it was his to use or not. THAT is his point, taken in context.

If the Democrats have to lie to make their case, they are desperate.

And if they are desperate? That’s a good sign.