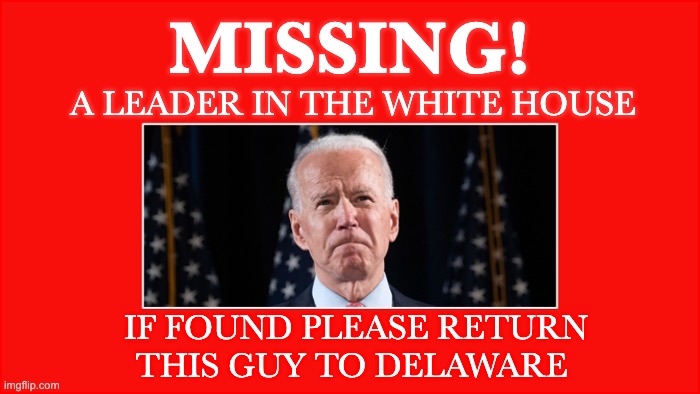 Neither President Joe Biden nor the “Border Czar” Vice President Kamala Harris has addressed this situation. The Biden-Harris regime made a big show since Day 1 blasting the Trump admin’s “inhumane” border policy and immediately set to work to dismantle all of the guardrails that the previous administration put in place. 45K unaccompanied minors

What are the results? A record border surge with no signs of slowing down and tens of thousands of unaccompanied minors… of which the Biden-Harris administration has lost track of at least 45,000 of them. That’s a lot of pictures on milk cartons. It’s also about four out of every ten of the 114,000 unaccompanied minors that have crossed since Biden took office.

The Biden-Harris administration has lost track of at least 45,000 unaccompanied minors who were brought across the southern border illegally — and President Joe Biden has yet to issue a statement about it.

Once processed by Border Patrol, unaccompanied minors fall under the supervision of the U.S. Department of Health and Human Services’ Administration for Children and Families. The agency reportedly works with a network of 200 shelters in roughly 24 states, according to a report by the Associated Press. Shelters are often set up inside military bases, stadiums and convention centers, referred to as “emergency intake sites.”

At its peak, HHS had 20,339 children in its care in April, with an average shelter occupancy rate of 76%.

During the detention process, HHS works with nongovernmental organizations to go through a vetting process and transport the children to reported family members or sponsors already living in the U.S.

You’d think that a guy that seems to love kids so much, it would be a “big effing deal” to lose track of tens of thousands of children. How can he creepily sniff and kiss them if they’re not around?

Where’s AOC in her crisp, white outfit crying about the tens of thousands of missing children while being photographed?

This was a disingenuous attack because the vast majority of parents didn’t want their children sent back to Central America and chose to remain separated because they wanted to use them as a free ticket into the U.S.

But then, there’s a lot about the “unaccompanied minors” that the Democrats, Open Borders activists, and their sycophants in the Corporate Media don’t want to address.

For years we’ve known that the situation at the southern border needed to be fixed. Trump had it pretty much fixed until Biden took over.

It’s no secret that criminal cartels exploit the current situation to make money by encouraging desperate people who “just want a better life” to circumvent the legal U.S. immigration process.

And boy, does it work. In fact, Biden policies have turned human trafficking into a billion-dollar racket worth more to the Cartels than selling dope.

They also know that it’s easy to get children into the U.S. and because of Obama’s DACA and DAPA programs, getting a child across the border is a foot in the door for the whole family.

Biden’s supposedly humane policy sends kids on a perilous journey that people are undertaking under the guidance of criminals who don’t really care if they live or die.

The situation is so bad that the only real solution is (a) to build a physical barrier to stop the flood of illegal migrants into the country and (b) enforce the laws on the books. Oh wait, we had one almost built until Biden stopped it from being completed.

Joe Biden, Kamala Harris, and their team of socialists known as the Democratic Party tossed a lot of criticism at former President Trump for his Big Beautiful Wall and his border policies. Their “more humane” response to the border crisis exacerbated the problem to unprecedented levels of illegal migration.

Perhaps the most inhumane part is that their policy incentivizes parents to make the absolutely asinine decision to send their minor children to the border, alone—with human traffickers. UNACCOMPANIED MINORS: How Biden’s Immigration Policy Is Incentivizing Family Separation

These policies affect real people. We have seen heartbreaking videos of children brought over the border by coyotes and abandoned alone, waiting for CBP officers to pick them up.

It’s obvious these smugglers don’t give two craps about what happens to these children.

It now appears that the Biden-Harris administration doesn’t give two craps about them, either. They’ve lost track of over 45,000 unaccompanied minors. Where are they? Are they safe? Are they being trafficked? We don’t know.

Last month, Border Control President Brandon Judd wrote an opinion piece for Fox News. It detailed how the administration “wasn’t prepared” for the surge that the new “humane border control policy” would cause and is now likely putting children at risk.

In the first few months of President Biden’s administration, the Border Patrol apprehended more unaccompanied children than at any point in its history.

The Biden administration wasn’t prepared, and the Border Patrol was forced to hold a good number of these children long past what the law allowed.

Instead of creating a long-term solution, the Biden administration merely cut back on the vetting process of the sponsors to whom children were being released. This decision was made in the name of expediency rather than the safety and well-being of the child.

Even under ideal circumstances vetting is a gamble, but when the government cuts corners it is guaranteed to fail. And failure in this case means the lives of vulnerable children are put in danger.

History has taught us that it is almost certain a good number of the 45,000 children the administration has lost are being forced into the sex industry or are being used for forced labor.
Source: Fox News

Judd then says that the Flores Settlement needs to be reviewed, the government response needs to change, and catch and release must end.

But no Democrat administration will do any of those things.

The Biden-Harris administration’s ad hoc way of handling the situation has ripple effects. For example, in Washington state, foster kids are being kicked out of their homes to provide accommodation for “unaccompanied minors.”

This administration has no plan and no freaking clue. Just like the President himself. #LetsGoBrandon