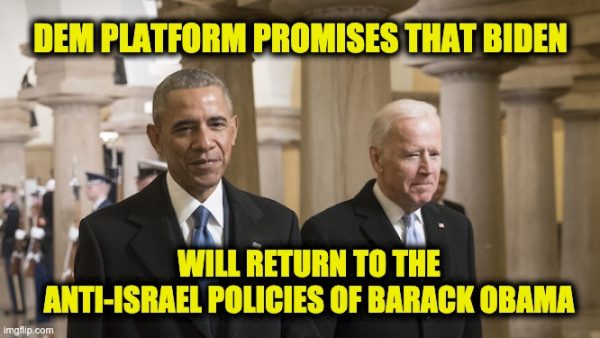 The Democrats are bragging that their 2020 platform is a pro-Israel one. That’s not true. The 2012 Democratic platform removed four crucial pro-Israel planks from its platform. During the 2012 Democratic party convention, one was put back (Jerusalem is Israel’s capital), over the objection of the delegates. These four planks were not added back to the platform in 2016 or 2020. Despite the bragging, the 2020 DNC platform is Anti-Israel.

The Israel part of the 2020 DNC platform reads;

Democrats believe a strong, secure, and democratic Israel is vital to the interests of the United States. Our commitment to Israel’s security, its qualitative military edge, its right to defend itself, and the 2016 Memorandum of Understanding is ironclad.

Democrats recognize the worth of every Israeli and every Palestinian. That’s why we will work to help bring to an end a conflict that has brought so much pain to so many. We support a negotiated two-state solution that ensures Israel’s future as a Jewish and democratic state with recognized borders and upholds the right of Palestinians to live in freedom and security in a viable state of their own.

Democrats oppose any unilateral steps by either side—including annexation—that undermine prospects for two states. Democrats will continue to stand against incitement and terror. We oppose settlement expansion. We believe that while Jerusalem is a matter for final status negotiations, it should remain the capital of Israel, an undivided city accessible to people of all faiths. Democrats will restore U.S.-Palestinian diplomatic ties and critical assistance to the Palestinian people in the West Bank and Gaza, consistent with U.S. law. We oppose any effort unfairly to single out and delegitimize Israel, including at the United Nations or through the Boycott, Divestment, and Sanctions Movement while protecting the Constitutional right of our citizens to free speech.

Notice it says that the future of Jerusalem is a matter for negotiation, although the U.S. has recognized it as Israel’s Capital and moved our embassy to Jerusalem.

The following paragraph was removed in 2012 and remains off the Democratic platform (bold added by this author):

The United States and its Quartet partners should continue to isolate Hamas until it renounces terrorism, recognizes Israel’s right to exist, and abides by past agreements. Sustained American leadership for peace and security will require patient efforts and the personal commitment of the President of the United States. The creation of a Palestinian state through final status negotiations, together with an international compensation mechanism, should resolve the issue of Palestinian refugees by allowing them to settle there, rather than in Israel. All understand that it is unrealistic to expect the outcome of final status negotiations to be a full and complete return to the armistice lines of 1949. Jerusalem is and will remain the capital of Israel.The parties have agreed that Jerusalem is a matter for final status negotiations. It should remain an undivided city accessible to people of all faiths.

While saying Democrats will continue to stand against incitement and terror without adding back the line about Isolating Hamas til it renounces terrorism, the Democratic party is supporting rather than standing against terror.

The part of the 2020 platform reading, “We support a negotiated two-state solution that ensures Israel’s future as a Jewish and democratic state” is impossible without putting back the line eliminated since 2012 saying “should resolve the issue of Palestinian refugees by allowing them to settle there, rather than in Israel.”

The number of Palestinian refugees in 1949 was somewhere between 800,000-900,000 (there was an equal number of Jewish refugees from Arab lands).  Today the number of refugees is claimed to be is over 4 million. The modern Palestinian refugee count is the only example in history where the number of a group of refugees has grown without a population shift (the UN counts the original refugees, their children, grandchildren, first cousin twice removed on their mother’s side, friends, etc. as refugees). Since they cannot defeat Israel militarily, one of the Palestinians’ strategies is to flood democratic Israel with the so-called “refugees” so it will cease to exist as a Jewish state via election.  Unlike their pre-2012 platforms, the 2020 Democratic platform encourages this Palestinian strategy to destroy the Jewish State.

What do they mean by settlement expansion? Are they talking about what Biden out about in 2010?  In March 2010 Joe Biden went to Israel to rip into Netanyahu for building adding bathrooms into a community in Jerusalem

Does Biden and the Democrats really believe a strong, secure, and democratic Israel is vital to the interests of the United States? While it is true— Biden worked for Obama for eight years, who tried to damage Israel at every turn. Are Biden and the Democrats only making that statement for votes? After all, in 1972, Biden was quoted as saying. “Jews Are Too Emotional About Israel, and international issues have to be addressed without emotionalism. At the same time, he denied he shifted his position on Israel to gain Jewish support.

Here’s the bottom line. The 2020 Democratic Party platform does not reflect support of Israel.

According to the former Israeli ambassador to the U.S., Michael Oren…  The Biden/Obama administration deliberately damaged the relationship between the United States and Israel. Biden never renounced that goal.  Based on the 2020 platform and his spotty history with regards to supporting Israel, will Biden continue the objective of driving a wedge between the U.S. and Israel if he is elected?